Don't use plagiarized sources. Get your custom essay on
“ Yersinia Pestis Report ”
Get custom paper
NEW! smart matching with writer

Yersinia Pestis is caused by fleas that are carrying the bacteria; it’s believed that the fleas would attach to a carrier of Yersinia Pestis, most likely a rat. The bacteria would then multiple in their stomach, and eventually prevent them from digesting their food and they starve to death in the end. But, before they die, they frantically try to find a food source, so they will try multiple sources and in turn they end up spreading the disease (Eisen, et al).

The symptoms of Yersinia Pestis depend on what plaque it is; they all overlap but are distinct to each other. The most common type of plaque is bubonic, it’s called bubonic because when the bacteria enters it enters the lymph nodes, which irritates, and cause it to enlarge and that is called a bubo. (Lutwick and Kaye) Other symptoms include fatigue, headache, aches, fever and chills. The Pneumonic Plaque spreads in the air and is one of the most dangerous of the plaques, along with Septicemic.

But, the symptoms of the Pneumonic plaque are, chest pain, weakness, nausea, breathing difficulty, fever, and bloody cough. Septicemic Plaque happens when the bacteria enters the blood stream and multiples there. The symptoms are, abdominal pain, weakness, fever, chills, nausea, diarrhea, bleeding from nose or mouth, or blood gathered beneath the skin. The Bubonic Plaque isn’t as dangerous as Pneumonic or Septicemic but can evolve into either of those if left untreated. (Mayo Clinic)

According to the Centers for Disease Control and Prevention most of the time a bubo is present, and you can gather samples from the bubo and looked at in a lab. If the person has Septicemic Plaque, then you can take a blood sample to test, and if the person is Pneumonic, then you can sputum sample, which according to Webster, is a mixture of salvia and mucus, and can also contain pus, blood, microorganism, or fibrin. From then if they tested positive, they will be given antibiotics, and if they have Pneumonic Plaque, they will be separated away from everyone to make sure they don’t contaminate anyone, “quarantined” basically. Also, anyone in contact with someone with the Pneumonic Plaque might be observed for a couple days to make sure they haven’t contracted it.

The first major outbreak of Yersinia Pestis was the Justinian Plaque, which is a series of outbreaks that happened between 541 A.D and 750 A.D and is estimated to have killed 25 to 50 million people across Constantinople, Rome, and the Mediterranean. Then the next major outbreak was the Black Plaque, which mainly took place in Europe between 1347 to 1352 and killed about one to two-thirds of Europe (Alfani and Murphy) The last major outbreak between 1850 to the 1860’s, and started in China, but it had spread to Hong Kong in 1894 and that is where it started to spread to other countries through the shipping ports. It wasn’t till then that America had contact with this disease, and it has never left. But, in 1894 Alexandre Yersin identified what was causing this illness, and Yersinia Pestis was named after him, the founder. (Spyrou and Bos) In Australia, they were hyper vigilant to prevent an outbreak there, in fact they paid anyone who brought a rat got paid two-pence per rat to get incinerated, and they killed more than 108,000 rats. (Australian Geographic) But, there are still outbreaks today, maybe not as big, but there still happening. According to the World Health Organization, there has been, “from 2010 to 2015 there were 3,248 cases reported worldwide, including 584 deaths. That’s and average of about 541 cases a year, and an average of about 97 deaths a year.

So, far in America, we only use antibiotics against Yersinia Pestis; America use to use vaccines, but we couldn’t manufacture one of the components in the vaccine, and other vaccines used by China and former Soviet Union states aren’t approved by the FDA, because the potential side effects were severe. Such as fever, headaches and malaise, which according to Webster’s Dictionary the medical definition is “a slight or general feeling of not being healthy or happy” (Zuraw) Reported cases of Yersinia Pestis are less than they were before, but Yersinia Pestis is a multi-resistant drug and it is in the top five potential biohazard terrorism list. Yersinia Pestis is resistant to about eight antibiotics, “streptomycin, chloramphenicol, ampicillin, spectinomycin, kanamycin, tetracycline, sulfonamides, and minocycline.” (Ruifu) So, luckily there are three possible vaccines being tested in the United States to be used as a preventive incase anything happened.

There are a number of ways to prevent getting Yersinia Pestis, the first way is to be safe outdoors from fleas. Wear bug spray, long pants, be cautious of places that are known for having fleas, don’t pick up or touch dead animals, especially if they have fleas on them. Also, if anyone has pets, they should keep them away from dead carcass, and inspect them for fleas regularly, and during summer when the fleas are most active you might want to moister their behavior for warning signs. (Kassem, et al) 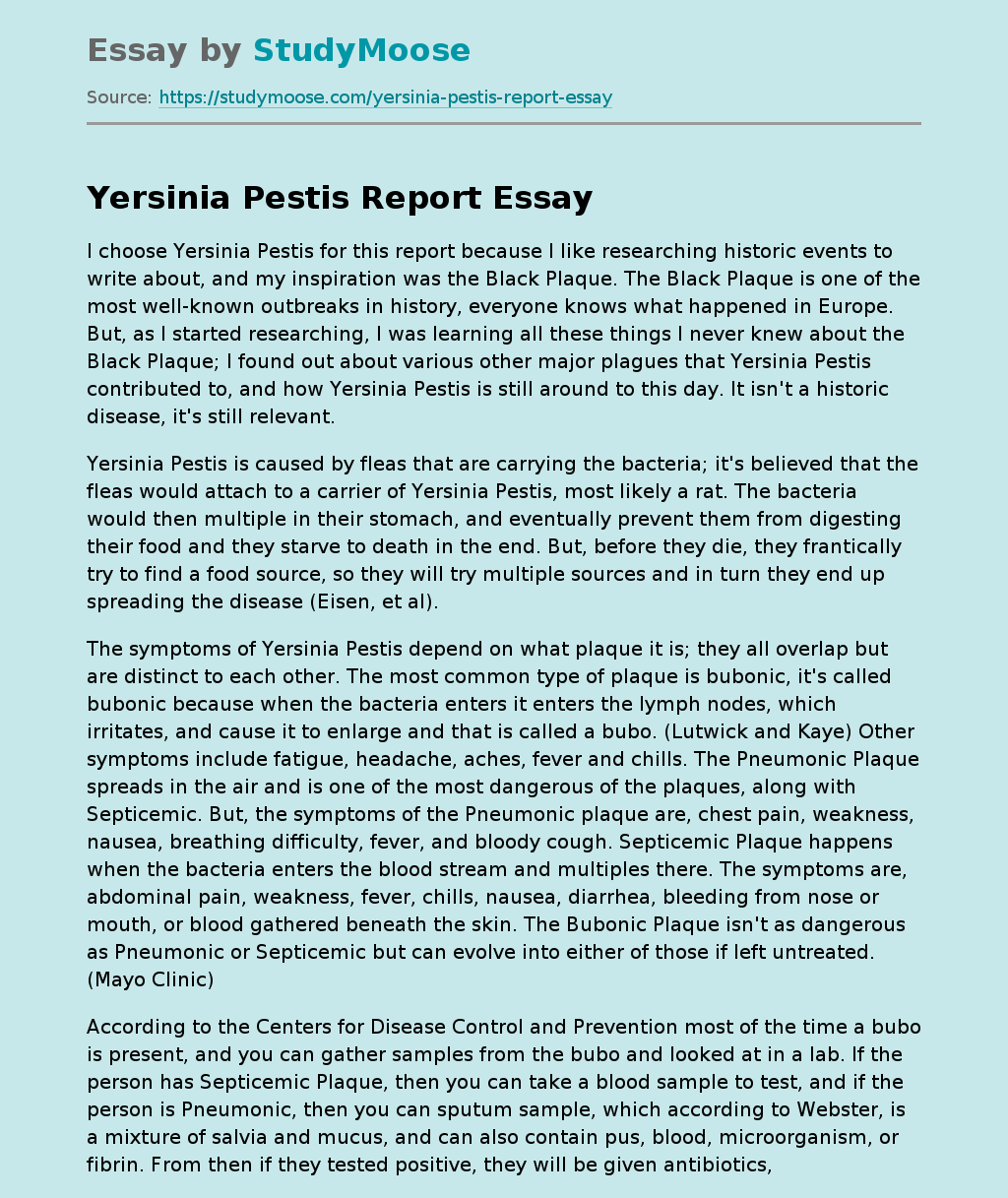