The 'War of Currents'

The competition between George Westinghouse and Thomas Edison to supply electricity to cities in the late 1880s is often called the ‘War of Currents’, as this battle ultimately decided which type of current became the standard for the generation of electricity today. Due to different advantages and disadvantages, Edison promoted direct current (DC) for electric power distribution, whereas Westinghouse and Nikola Tesla both advocated alternating current (AC).

Edison’s direct current was initially the standard for the United States for electricity distribution as not only did DC work well with incandescent lamps (the principal load of the day), but DC systems could be directly used with storage batteries, providing valuable load-levelling and backup power during interruptions of generator operation.

Also, Direct current generators could be easily paralleled, allowing economic operation by using smaller machines during periods of light load and improving reliability, and Edison had invented a meter to allow customers to be billed for energy proportional to consumption, but this meter only worked with direct current.

Furthermore, at the introduction of Edison’s system, no practical AC motor was available.

However, the great disadvantage of using DC for electricity distribution was that it could only be generated and distributed at the voltages at which it was used by consumers, meaning that currents in conductors were hefty, resulting in huge and expensive energy losses over distances more than one or two kilometres. Thus, many power stations and an unattractive abundance of wires to carry the required current were needed in order to supply electricity to a large city.

Westinghouse and Tesla’s AC generators overcame these disadvantages as, through the use of transformers, the voltage could be increased or decreased as was required. This allowed AC to be generated at moderately low voltages, increased to high voltages when needed to journey long distances, and decreased again to lower voltages for the consumers. The higher voltage not only meant that AC could travel over greater distances than DC, but it allowed it to do so with smaller energy losses.

This allowed for lighter conductors, and fewer power stations with greater distances between, giving the use of AC to supply electricity to cities economic advantages. AC also experienced an increase in popularity due to Tesla’s invention of the induction motor, which only operates on AC. Additionally, AC generators are simpler, cheaper and easier to assemble than DC generators. Because AC generators do not require a commutator, they are also more reliable, requiring less maintenance than DC generators.

Thus, AC replaced DC as the dominant form of power generation and distribution, improving the safety, efficiency and range of electricity supply, much to Edison’s despair. Edison had relentlessly tried to prevent this as he carried out a campaign to discourage the use of alternating current through methods including spreading information on fatal AC accidents, publicly killing animals, and lobbying against the use of AC in state legislatures. He even tried to popularise the term for being electrocuted as being “Westinghoused” in mockery of his opponent. However, not all was lost as some applications require the use of DC, such as for metal purification and in the production of chlorine. 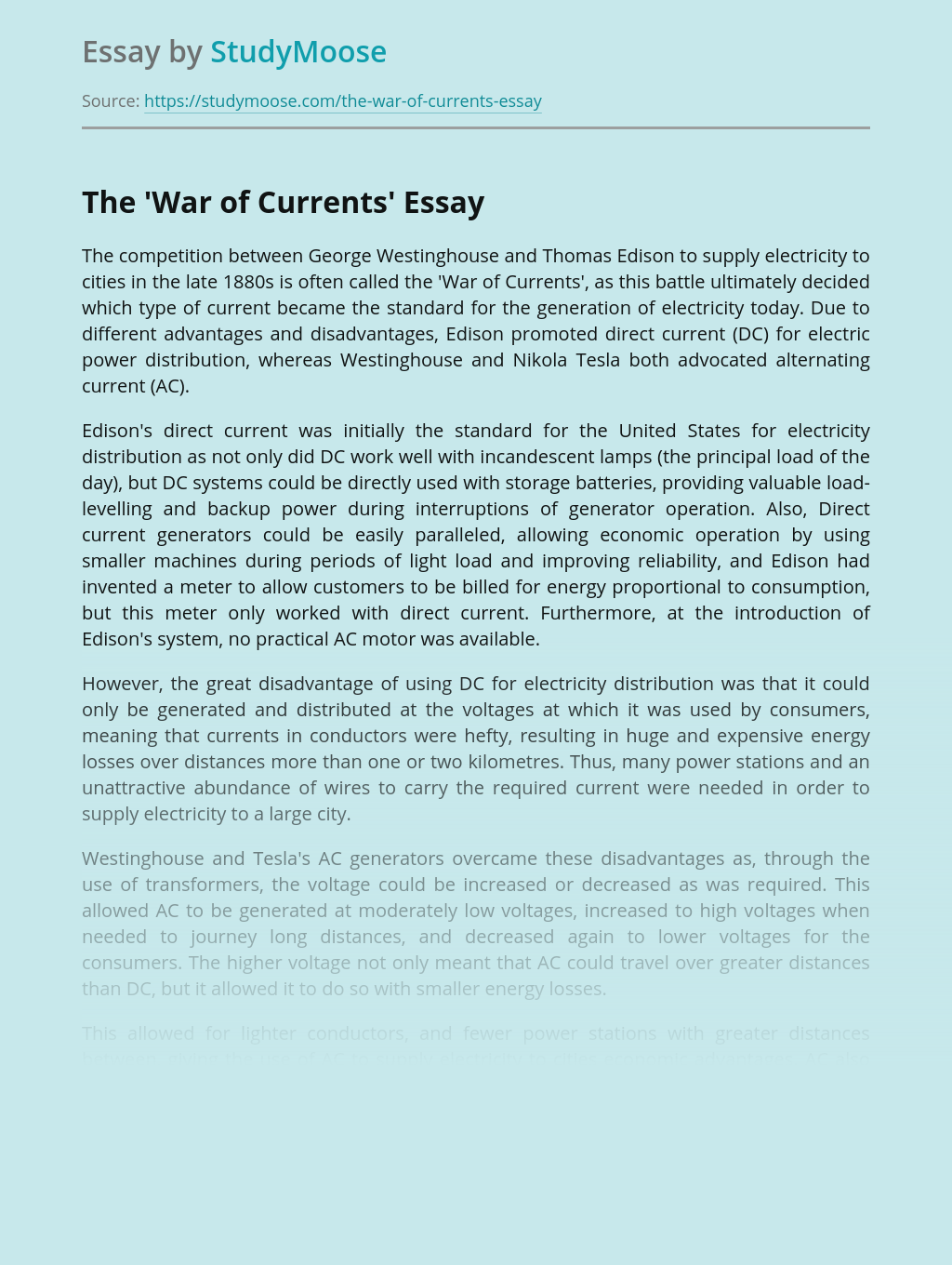 Don’t waste time
Get a verified writer to help you with The ‘War of Currents’
Hire verified writer
$35.80 for a 2-page paper
Stay Safe, Stay Original