Therefore, on a larger scale reminding the reader of two poems that serve as a repertoire to the ‘World’s Wife’, as the somewhat condescending title is a clever over turning of ‘the world and his wife’ implying that women are the property of men. Yet with this exaltation of men, we see that these two poems are not only reminders of the feminist characteristic of ‘The World’s Wife’ but these two women have been given voices by Duffy. Consequently, archetypes for how women respond to male domination reversing the idea of patriachalism and replacing it with an order based on feminine virtues.

Don't use plagiarized sources. Get your custom essay on
“ World’s Wife ”
Get custom paper
NEW! smart matching with writer

The common theme running throughout Duffy’s poem is that every woman has a female, prerogative one in which they break the boundaries of the subservient and mundane life style that has been bestowed upon them by their husbands. As Mrs Rip Van Winkle initially allows us to be aware of ‘while he slept I found some hobbies’, and she eventually has the ability to pursue her ‘dreams’.

Where as Mrs Sisyphus seems less dominated by her husband albeit longing for his attention serving as a contrast to that of Mrs Rip Van Winkle. The style in which Mrs Sisyphus has been written seems conversation and idiomatic, talking direct to the reader.

‘That’s him’, allowing for one to gain a better insight into Mrs Sisyphus’ opinions and views as the colloquialism allow the reader to appeal and relate more to the poem. ‘Load of old bollocks’ therefore, giving an informal tone to the poem yet making it seem that much more real.

Furhtermore, the structure of the poem mimics the movement of the rock as it goes back and forth. In addition the rhyming scheme used within the poem ‘ jerk, kirk, berk’ seems to convey the anger of Mrs Sisyphus, each word ending in a ‘K’ the harsh tone given at the end of each word is an elaborate reminder of how Mrs Sisyphus is made to feel .

In contrast Mrs Rip Van Winkle seems a much more easy flowing poem, each stanza containing only three lines and the first line being the shortest, depicting various time periods and events. The purpose of this is to convey how short lived they actually are for Mrs Winkle, as the poem initially starts with three lines and then ends with three also highlights the entrapment of Mrs Winkle, she began and ended with absolutely the same not being able to permanently free herself.

Thus to conclude, both poems seem characteristic of the ‘Worlds Wife’ not only defying male conventionalism, yet also making the reader aware of relationships that seem to be governed by men. Duffy highlights, not just in these poems but many others in her collection that in order for a woman, to be truly happy she must step out of the web that she has trapped herself into. For a woman also play a very important part in a society and patriarchal views will only ever begin to deteriorate if females begin to make a stand. 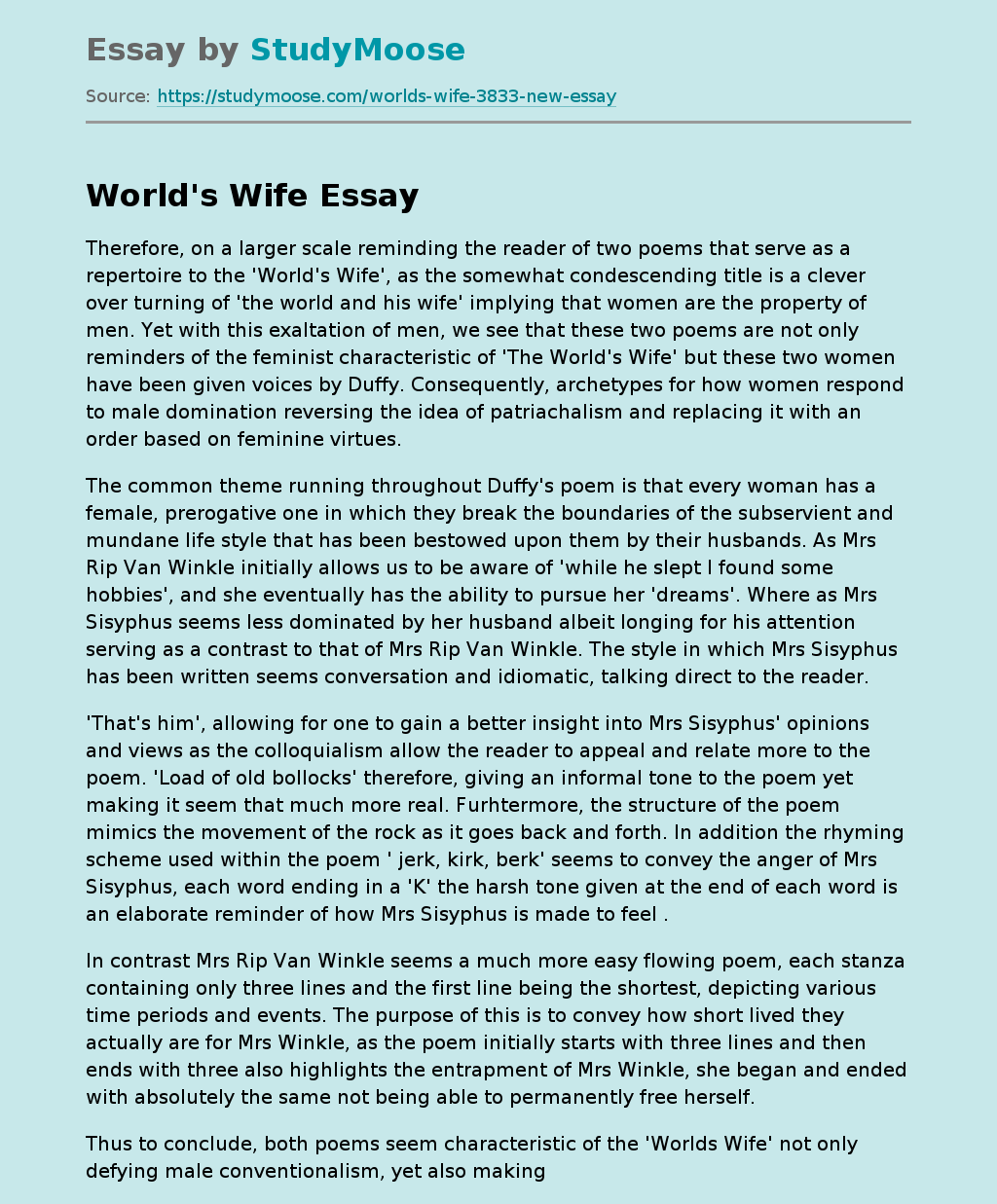