Work Rights and Rights for Women Versus Men

In the past, females or women do not have the rights that their male counterparts have, such as the right to vote, the right to work, and education. They have been traditionally raised stay home and care for their families. This has changed as more and more women showed to the world that women are also capable of achieving things like everyone else. However, there are instances that put women at risk, which consequently make them vulnerable compared to the rest of the population.

Don't use plagiarized sources. Get your custom essay on
“ Work Rights and Rights for Women Versus Men ”
Get custom paper
NEW! smart matching with writer

The purposes of this assignment are to present a vulnerable female population, discuss the issues concerning them, and describe how nurse practitioners can provide culturally competent care.

The main reason for choosing such a population is the writer’s lack of knowledge regarding the health of incarcerated women. Aside from that, there are also biases or prejudices when it comes to providing care to incarcerated individuals. As healthcare providers, nurse practitioners should have at least knowledge on how to care for these vulnerable population. Incarcerated women may not always be incarcerated as they have chances to be back to the community.

There has been an increase in incarceration rates of women in the United States in the past three decades (Kelsey, Medel, Mullins, Dallaire, & Forestell, 2017) with a total of 219,000 incarcerated women in 2018 (Kajstura, 2018).

Christensen (2014) stated that African American women have the highest rates of female incarceration compared to other racial or ethnic groups. There are different reasons as to why women have been incarcerated or stuck in jails, such as violent crimes, drug trafficking, a felony, or the inability to provide cash bail (Kajstura, 2018). Neinstein, Katzman, Callahan, Gordon, Joffe, and Rickert (2016) stated that the mortality rates of incarcerated individuals are higher compared to the general population. Incarceration poses a negative impact on women’s health not only psychologically but also physically. Incarcerated women have a high risk of developing mental health problems as well as acute and chronic disorders compared to those non-incarcerated women in the community (Arevalo, Larragoitiy, Vargas, Kohlbry, & Warner-Robbins, 2019). In addition to that, they are at risk for “violence, sexual assault, injury, communicable diseases, and poor nutrition and living conditions” (Sufrin, Kolbi, & Roth, 2015, p. 213). Kubiak et al. (2017) stated that there are incarcerated women who are either sexually molested or raped by either prison staff or fellow inmates, which most of the time not reported if prison staff was the assailant.

Incarceration has negative impacts on the psychosocial needs of the individual, especially to women. It negatively affects the incarcerated woman psychologically as they are at risk for isolation, loneliness, or poor interpersonal relationships. As previously mentioned, incarcerated women are at risk for developing mental health problems, which can be attributed to a high level of environmental stress and lack of access to mental health services (Mignon, 2016). The prison and jail environments are not designed for comfort but rather an environment where the loss of freedom and punishment thrives (Fedock, 2017).

An example of such loss of freedom is the separation of the incarcerated women from their children either at the time of incarceration or after giving birth while in prison, which increases their risk of estranged relationships with their children and mental health problems (Halter, 2018). Another blow to their self-esteem is the way pregnant women are treated when transported to community-based facilities for either prenatal care or labor and delivery. Pregnant incarcerated women are shackled with handcuffs, leg irons, and/or waist chains, which not only poses danger to the woman but also to the unborn baby (Clarke & Simon, 2013; Cardaci, 2013; Kelsey, Medel, Mullins, Dallaire, & Forestell, 2017). Negative outcomes of shackling during labor and delivery are not limited to physical injuries to the pregnant woman such as bruises or falls but also delay in the assessment, diagnosis, and initiation of treatment (Cardaci, 2013). Aside from that, the use of physical restraints to the incarcerated woman prevents her from safely holding her newborn baby and prevents her from making a bond (Kelsey et al., 2017).

DeCou, Lynch, Cole, and Kaplan (2016) stated that aside from intimate partner violence, interpersonal violence is also prevalent among incarcerated women in the United States. Overcrowding in women’s prisons or jails may play a role in violence (Fedock, 2017). Staff may not able to stop violence from progressing and/or occurring. Violence may hinder healthcare providers from delivering health services to incarcerated women for fear of getting harm. Policies and security measures are in place to maintain a safe environment and order; however, these may also hinder in promoting a caring environment because of the boundaries and limitations imposed by them (Christensen, 2014).

Incarceration often negatively affects the health of the affected individuals. Sue (2018) stated that it is part of the healthcare provider’s training to provide culturally competent care to individuals who have preferences on their sexuality, religion, and culture. However, it is not often included in the training on how incarceration may affect the patient’s health. As healthcare providers, we need to have knowledge and training on how to provide competent care for incarcerated women, including the care of pregnant women (American College of Obstetrician and Gynecologists, 2012)

Most correctional facilities are not equipped to provide adequate care not only for pregnant women but to all incarcerated individuals. Prior to incarceration, women have their own cultural beliefs, religion, and sexual preference, and these sets of individual preferences may not be honored while incarcerated. However, when these incarcerated women seek healthcare services, they deserve to be treated as unique individuals. As healthcare providers, we do not have to add prejudice and bias to the stigma they already experience surrounding incarceration. Beyond the crimes committed lies an individual who has certain values, beliefs, and practices, and once these are realized by healthcare providers, it is possible to apply cultural awareness when providing care (Christensen, 2014). The American College of Obstetricians and Gynecologists (2012) released a statement that healthcare providers should use or apply non-incarcerated guidelines of care when caring for incarcerated women and adolescent females. Aside from that, healthcare providers including nurse practitioners need to be sensitive where the incarcerated woman enter to the facility in order to avoid stigmatization. When nurse practitioners provide services within the confines of the correctional facility, it is important to establish a good working relationship with the staff and the patient.

Work Rights and Rights for Women Versus Men. (2021, Dec 11). Retrieved from http://studymoose.com/work-rights-and-rights-for-women-versus-men-essay 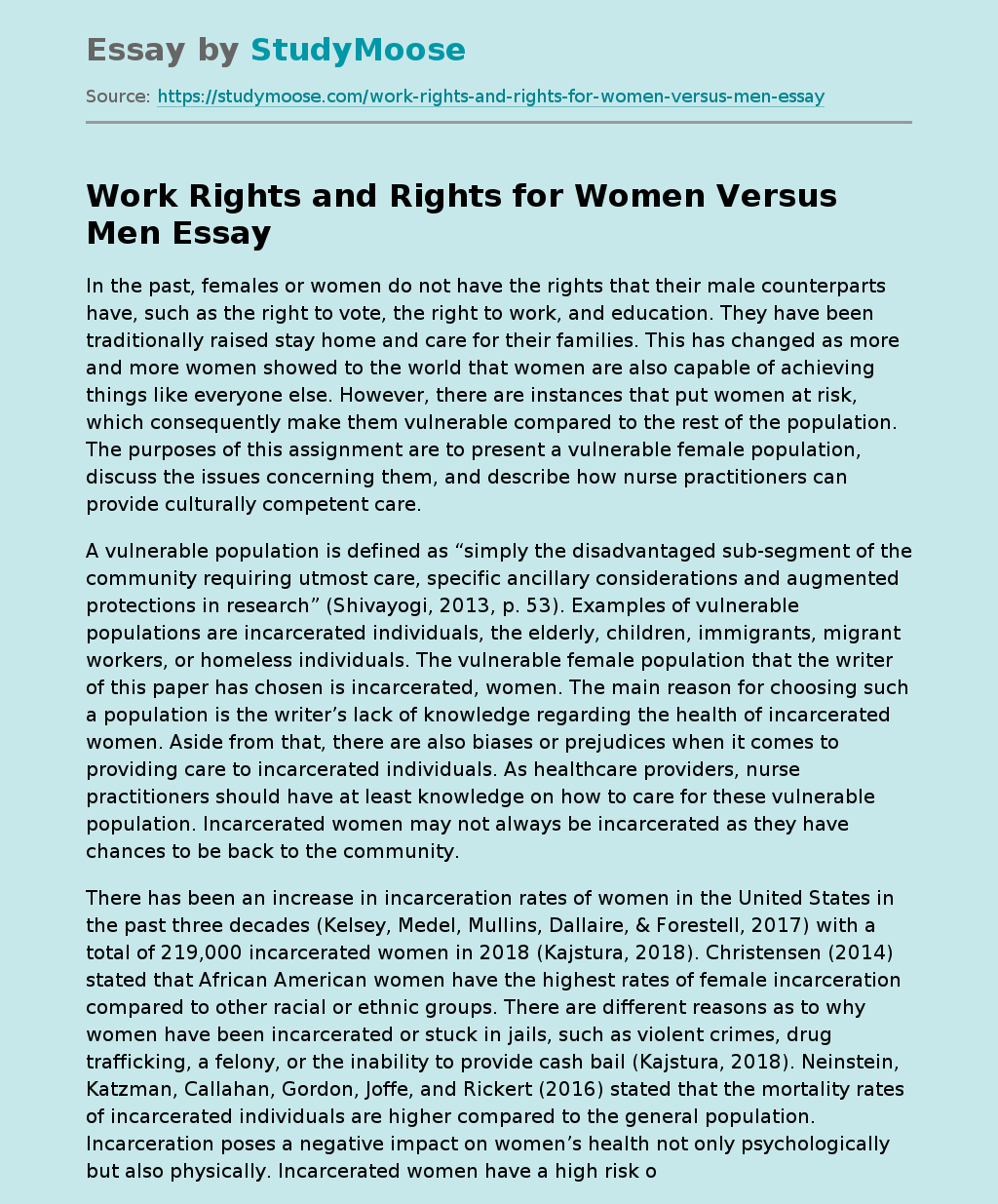