In William Wordsworth's We are seven

Don't use plagiarized sources. Get your custom essay on
“ In William Wordsworth’s We are seven ”
Get custom paper
NEW! smart matching with writer

Their different circumstances in life create the different opinions that they have.

Finally, these areas of contention between the perceived and the perceiver create a situation where the two characters insist on their own individual perceptions and this shows how limiting individual perception can be. Death is viewed by the speaker as completely removing the dead individuals from existence on Earth. “But they are dead; those two are dead! / Their spirits are in Heaven! ” (Wordsworth, LL 65-66).

The speaker believes that the girl’s dead siblings are in Heaven, while the girl believes they are in the ground and still dwell on Earth.

The speaker perceives that the girl’s dead siblings are gone. The speaker is experienced and has a different perception of death than the girl. The girl insists that “we are seven” and that her dead siblings remain with her: “Their graves are green… / And there upon the ground I sit, / And sing a song to them” (Wordsworth, LL 37, 43-44).

This shows the different perceptions the two characters have on life after death. For the girl, death has not robbed her of her siblings; they are just in a different place. She sings to them, spends time with them as if they were still living.

To her they have just “gone away” (Wordsworth, L 52). To the speaker, her siblings are dead. The speaker can only see the situation through his own perception and thus cannot grasp why the girl feels the way she does. The speaker states that: “You run about my little Maid, / Your limbs they are alive; / If two are in the church-yard laid, / Then ye are only five” (Wordsworth, LL 33-36). The speaker’s opinion is such that because the girl can move about and he can see that she is alive, he believes she exists on Earth as a living human being.

The speaker represents cynicism and experience, while the girl represents the pastoral and the innocent. The two characters are at different stages of their lives. The meaning of death and dying change as people grow from childhood to adulthood, and the girl does not completely understand death. She believes her brother and sister are still with her – they are in the churchyard, but the speaker insists they are gone to Heaven. Their particular perceptions of death are indicative of their present individual circumstances in life.

The girl is young and innocent and in “We Are Seven” the speaker equates her innocence with the pastoral: “I met a little cottage Girl: / She was eight years old, she said… / She had a rustic, woodland air, / And she was wildly clad… ” (Wordsworth, LL 5, 9-10). The pastoral represents nature, natural beauty, untainted and unaltered. Thus, it is fitting that the speaker describes her in pastoral terms because she is indeed young and as of yet untainted by life’s hardships and the more difficult experiences a person encounters as they grow into adulthood.

The speaker, conversely, is older and has experienced more in life. He has probably encountered hardships and difficulties and thus views death differently than the girl. Therefore, because of the different stages they are at in their lives, the speaker and the girl view death differently. The speaker and the girl maintain their different perceptions and refuse to see the death of the girl’s siblings in any other way but their own. Even though the speaker acknowledges the girl’s point of view, allowing her to insist that “we are seven” he still upholds his own opinion that “ye are five.

” The stubbornness of the speaker and the girl prevent them from seeing the situation from a different perspective. It shows how limiting individual perception can be. If the young girl had allowed herself to look through the speaker’s eyes, it may have comforted her to think that her brother and sister were up in Heaven, as opposed to under the ground or just gone “away. ” Conversely, the speaker could have also seen the situation through the young girl’s eyes and been sensitive to the fact that she found comfort in thinking her siblings were still near her and with her.

However, it is evident through the final exchange of “We Are Seven” that both characters maintain their views: “How many are you, then,” said I, / “If they two are in heaven? ” / Quick was the little Maid’s reply, “O Master! we are seven. ” / “But they are dead; those two are dead! / Their spirits are in heaven! ” / ‘Twas throwing words away; for still / The little Maid would have her will, / And said, “Nay, we are seven! ” (Wordsworth, LL 61-69). In the above exchange, it is almost as if each character ignores the other’s statements: the speaker asks how many siblings the girl has if two of them are in heaven.

The fact that he says “in heaven” places emphasis on the fact that he feels they are not on Earth; they are gone. However, the girl seems oblivious to that part of his question and insists once more that “we are seven. ” The girl feels that her dead siblings can still be included among her present group of siblings. The speaker would perhaps be satisfied if the girl responded “we were seven” indicating that the two dead siblings are not included in the present tense. The fact that the characters maintain their individual perceptions speaks to the limitations of refusing to see a situation in more than one way.

In William Wordsworth's We are seven. (2020, Jun 02). Retrieved from https://studymoose.com/william-wordsworths-seven-3531-new-essay 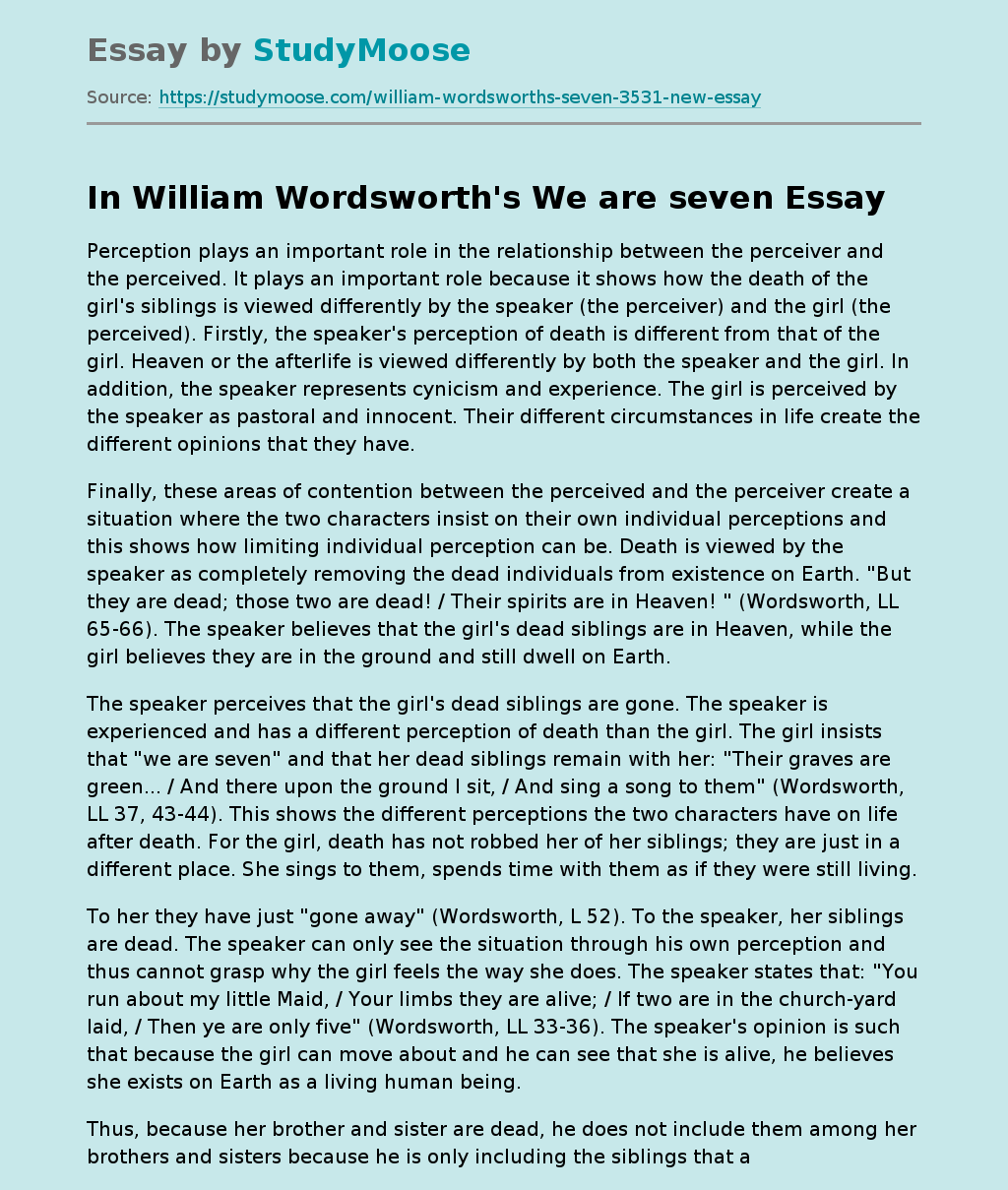