William Blake lived in London, England during the late 1700’s and early 1800’s; he was a brilliant poet who was one of the prominent influences of the Romantics Period. Although he is a prolific poet, he was not as famous during his life as he is now. His works were not fully appreciated until after his death. It was his habit to paint along with his poetry and he used his engraving apprenticeship to fund his love of art. Blake embodied the human mind, soul, and emotion, and he took great pride in his expression and seriousness of its nature in whatever endeavor he took on albeit poetry, paintings, or general belief.

Life in London during Blake’s early years was a world of contradictions in many senses. In the city, financial states went from one extreme to another along the same street. The “hustle and bustle” of the city dissipated into the quietness of the country within a couple of miles.

There were hard industrial workers of all ages and soft socialites who had no clue of the life the industrial workers led. London was the envy of the country but also had undeniable gothic-type evil. Blake’s work embodied all of London’s beauty and its indiscretions leaving nothing to bear.

Blake had visions and often talked about them. He had his first one at the young age of four, and continued to have them throughout his life. These visions guided him and gave him inspiration and ideas.

His father even considered beating him when he first started speaking of these visions. But his father also cared enough about Blake to not send him to school upon Blake’s request, instead at age ten he was sent to the best drawing teacher. Blake’s father paid his tuition and bought the extra supplies he needed to do his studying at home as wells and money to buy other materials he deemed necessary. Blake started an apprenticeship with a vintage but very prestigious engraver at fourteen years of age. His teacher sent him to Westminster Abbey to work, he had several visions and acquired a taste for Gothic type drawing during his stay. He enrolled in the Royal Academy and displayed his work there.

In the 1770’s, Blake married the illiterate Catherine Boucher and taught her how to read, write, and to assist in his illustrations. Blake was very versed and while he loved art he also had a love for reading too. He read a plethora of writers who were reputable and those who were only recognized years later. He taught himself seven other languages in addition to English so he could read in the original language of the author. In the early 1780’s, Blake’s early works were published in “Poetical Sketches,” this book used his writings from the early age of twelve.

The late 1780s, after the death of Blake’s beloved brother Robert, he often had visions saying Robert brought him new inspiration and ideas during these visions. During one vision in particular, Blake was given a new technique that was very radical. While Blake often combined his writing and his art, in this new technique; he combined both on a copper plate forming the print and easily allowing reproduction. “This process allowed Blake to adopt a much more spontaneous multimedia artistic practice than was usual, and ensured that the end product was entirely his own: he was at once the writer, the illustrator, and the printer.” (p. 578) “This exacting and arduous process was Blake’s major source of income, requiring an amount of persistence and hard labor rather contrary to the outlook of a visionary, which he would “curse and bless” at once for its difficulty and for the beauty and perfection of the results.”

Blake’s early work seems unmarred by human err and the harsh reality of humanity. His writings were often accompanied by brilliant illustrations and paintings. They focused on joy, happiness, childhood innocence, creativity, and the Creator. Although his religious belief was unorthodox, he did seem to reference God and write about Him often in his works. From Blake’s earlier poetry, he and Catherine published/produced and illustrated, “Songs of Innocence” comes “The Little Black Boy” where Blake writes, “And we are put on earth a little space, That we may learn to bear the beams of love.When I from black and he from white cloud free, And round the tent of God like lambs we joy,” (p.583) The poet speaks of the mother teaching, loving, and kissing her beloved child and then it goes on to talk about the child learning to love free from restraint, and then meeting God the Creator and affectionately stroking His beard.

Blake also had a poem called “The Lamb” where he contrast a real lamb and Jesus as a Lamb; he ask the lamb where he came from and who made him. Blake precedes to tell him, “He is called by thy name, for he calls himself a Lamb: He is meek and he is mild, He became a little child: I a child and thou a lamb, we are called by his name. Little Lamb God bless thee. Little Lamb God bless thee.(p. 583) This poem clearly shows Blake’s love and adoration for God and the beauty of His creation. Although Blake was a quiet distinct man, he was very sensitive to the world around him and the feeling he had, he did not mind recording those thoughts for future readers.

Life can have a way of spoiling a natural high per say or an optimistic view of the world. After a series of “let downs” in Blake’s life and the mixing of the track society and the world was heading, Blake’s writing changed and became hardened. He took his themes from many of his previous writings and morphed them into a darker more pessimistic version than previously recorded. Blake had an idea of how the world and life was supposed to look like and he was deeply affected by the reality that tragedy and disappointment can hit and have a tornado-like effect. 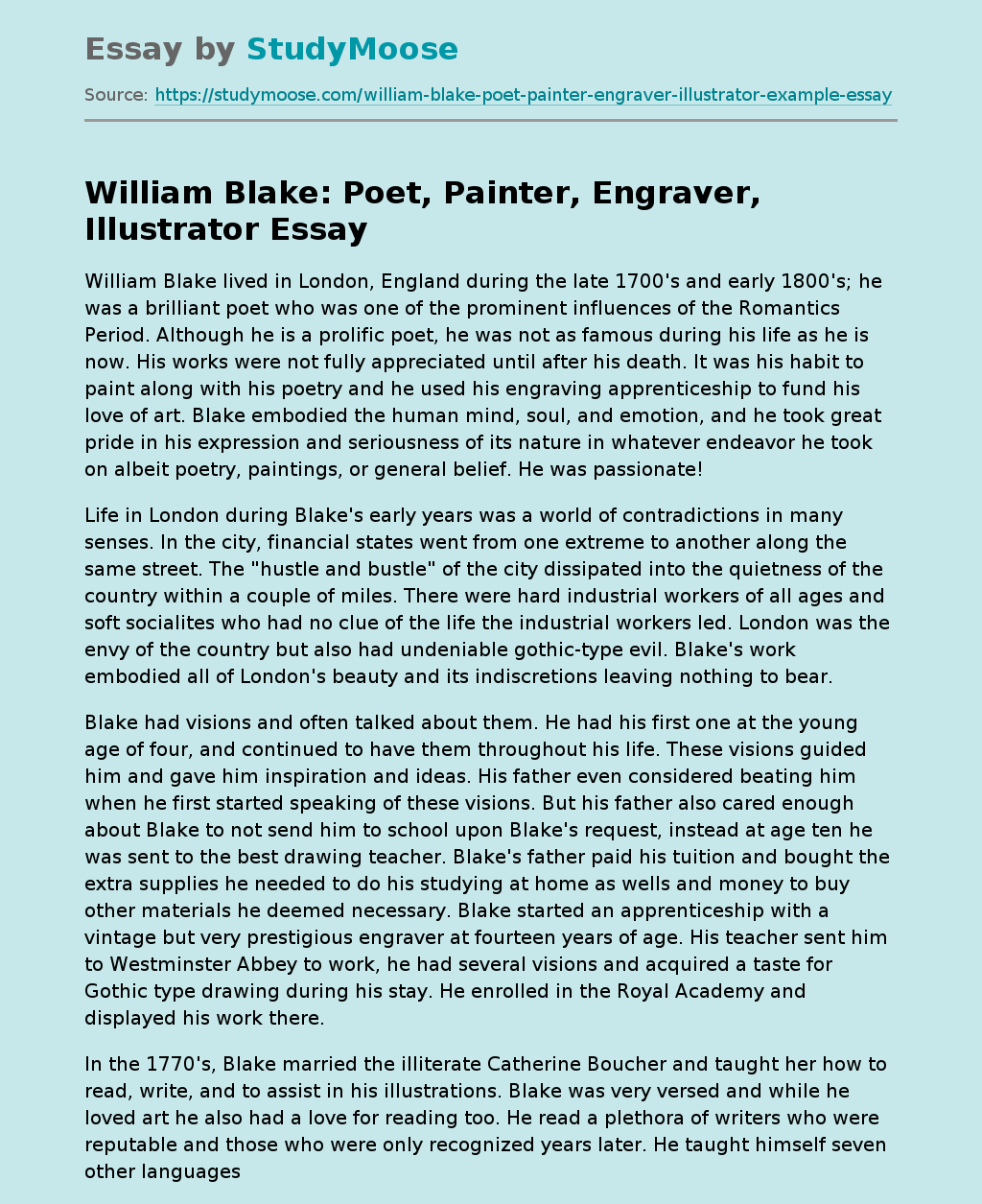