Don't use plagiarized sources. Get your custom essay on
“ Why Visit France? ”
Get custom paper
NEW! smart matching with writer

The capital city of Paris is unlike any other city in the world. It is known worldwide to be the city of lights. Paris is what will be focused on, on this trip to remember for a lifetime.

You will be staying at one of the most prestigious hotels in the entire world, The Ritz, Paris. During this trip you will journey to some of the finest restaurants in France, such as La Loraine and George V. You will venture to the famous Eiffel Tower, along with going to the Moulin Rouge, Arch of Triumph, Notre-Dame Cathedral, Montmartre, and Disneyland.

This is truly a trip that will never be forgotten.

The French language is spoken all throughout France. Nearly 100% of residents speak French as a first or second language. English is used at main tourist attractions and throughout most hotels. However other language such as: Provencal, Breton, Alsatian, Corsican, Catalan, Basque, and Flemish are declining rapidly and are rarely used.

France’s total area is 547,030 sq km, which is almost double the size of Colorado in comparison. Most of the north and west sides of France have flat plains or gently rolling hills. The South and East side of France is mainly mountainous, especially in the Alps. In the Alps is the famous Mont Blanc, which is the highest mountain in all of Europe. On the Mediterranean coast lies the French Riviera. It has very hot and dry summers there and very mild winters making it such a popular tourist point.

France has generally cool winters and mild summers. Along the Mediterranean coast there is mild winter and very hot dry summers. Occasionally there are very strong northerly winds that are known as mistrial.

You will travel Air Canada to get to France’s capital city. It will be a direct flight leaving at 7:00pm (Toronto time) from Pearson airport on February 10, 03. It will arrive in Paris at Charles De Gaulle airport at 8:30am (France time) on February 11, 03. You will be on flight number AC880 and will be flying Executive Class. When departing from Paris you will be leaving at 11:55am (France time) on February 15, 03 and will be arriving at 2:30pm (Toronto time) that same day. You will still be traveling Executive class and your flight number is AC881. Total cost for flight both ways is $ 6 294.70 per person.

You will be staying at the Ritz Paris during your stay in France. It is located on the beautiful Pace Vendome, in the heart of Paris, within walking distance to shopping and attractions. You will be staying in a superior room with up to two beds. The room is 366 square feet with a garden view and classic French style with a marble bathroom. Room rate is 565.00 EURO a night.

You will be exploring a numerous amount of attractions and landmarks in Paris. The Eiffel Tower is one of the many attractions you will be visiting. Standing at over three hundred meters and weighing seven thousand tons, the tower was one of tallest buildings in the world until 1930. With one of the most breathtaking views in all of Paris it is truly a sight to see. Opened in 1992, Disneyland Paris is one of the most exiting attractions in France. With over 140 acres of fun, it can truly be a magical experience. The French National Museum of Art is another attraction not to miss.

The museum has a large collection of paintings by artists such as Picasso, Braque, Max Ernst, Magritte, Chagall, Matisse, Delaunay, Kandinsky, Klee and much more. The Champs Elysees is another sight not to miss. It is one of the most well known streets in all of France. The Tour De France finishes here and many celebrations are held here regularly. Other popular and visited landmarks and attractions include the Moulin Rouge which houses the show “Feerie” and classical cabaret and dinner shows, The Versailles Palace, residence of the Sun King, Louis XIV, and the Notre Dame Cathedral a masterpiece of gothic architecture. 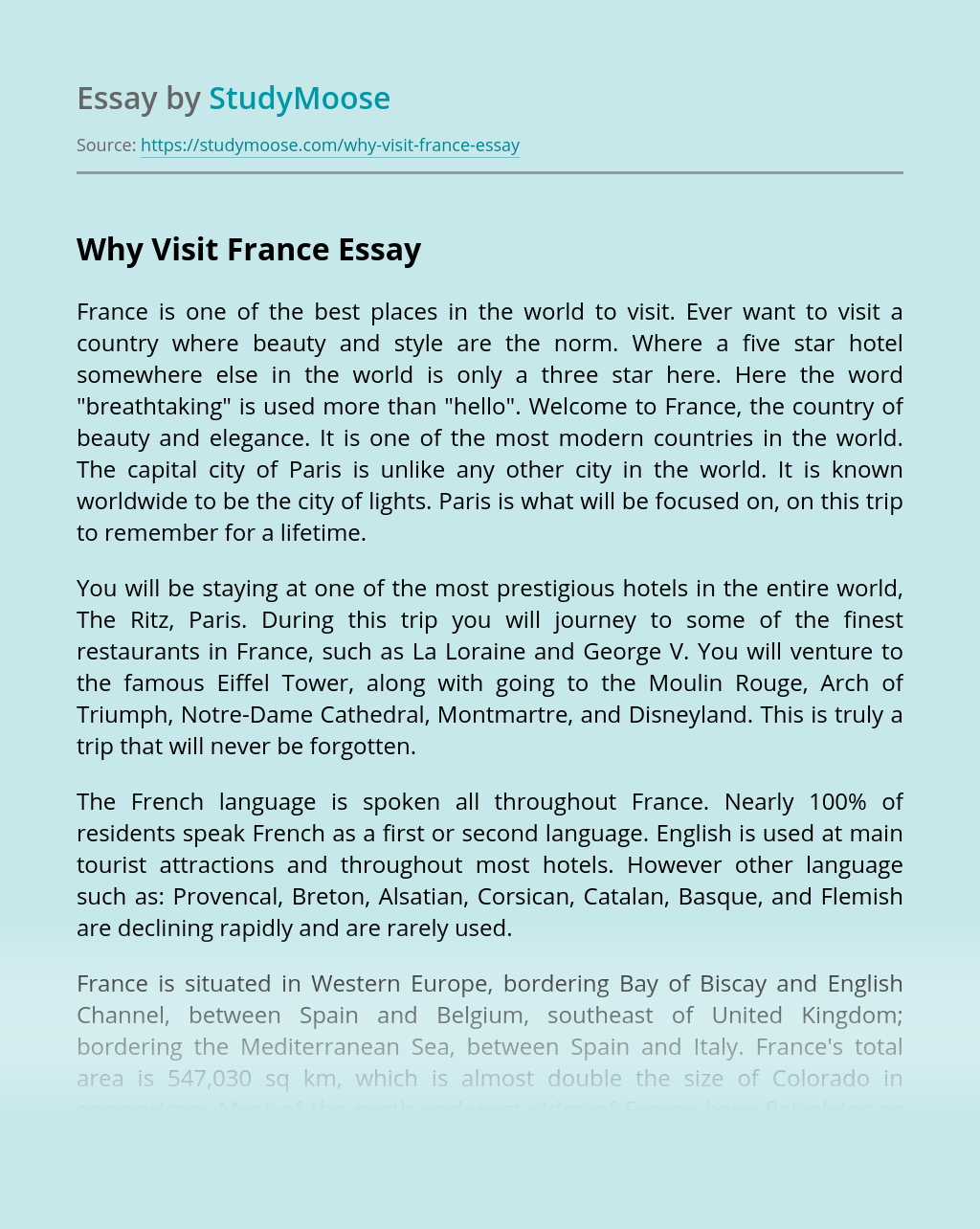