The Culture of France

France is a modern European state and a republic, the capital of France is Paris, and is one of the world’s top five economies. The French head of state is the President, elected by universal suffrage (2012 elections): the president governs through a Council of Ministers and a parliament made up of two chambers, the National Assembly (lower house) and the Senate (upper house). In addition, the political system in France called (Republique). Metropolitan France (France in Europe) has a population of slightly over 62 million, a little more than that of the United Kingdom.

Don't use plagiarized sources.
Get Your Custom Essay on The Culture of France Just from $13,9/Page

France takes an area around 550 000 km². France official language is (French), and official currency is (Euros €). The flag – the tricolore – consists of three vertical bands of equal width, displaying the country’s national colors: blue, white and red. Red, white and blue have come to represent liberty, equality and fraternity – the ideals of the French Revolution. Blue and red are also the time-honored color of Paris, while white is the color of the Royal House of Bourbon.

France famous of Eiffel Tower and many other great sights .France is the largest country in the EU, stretching from the North Sea to the Mediterranean.

The landscape is diverse, with mountains in the east and south, including the Alpine peak of Mont Blanc (4 810 m) which is Western Europe’s highest point. Lowland France consists of four river basins, the Seine in the north, the Loire and the Garonne flowing westwards and the Rhône, which flows from Lake Geneva to the Mediterranean Sea. The president of the Republic has an important political role. He chairs the meetings of the Council of Ministers (cabinet), and retains overall responsibility in key areas of foreign affairs and defense. The day-to-day running of the country is in the hands of the prime minister. The president is elected by direct popular vote for a period of five years. The parliament consists of a National Assembly, directly elected every five years, and a Senate whose members are chosen by an electoral college. France has an advanced industrial economy and an efficient farm sector. Main activities include automobile manufacture, aerospace, information technology, electronics, chemicals and pharmaceuticals and fashion. France has produced some of the continent’s most influential writers and thinkers. In the last two centuries it has given the art world the works of Renoir, Monet, Cezanne, Gauguin, Matisse and Braque, to name but a few. French cuisine is one of the finest in Europe; cooking and eating are part of French culture and lifestyle.

Cultural aspects:
Most people associate French culture with Paris, which is a center of fashion, cuisine, art and architecture, but life outside of the City of Lights is very different and varies by region. Historically, the French culture was influenced by Celtic and Gallo-Roman cultures as well as the Franks, a Germanic tribe. France was initially defined as the western area of Germany known as Rhineland but it later came to refer to a territory that was known as Gaul during the Iron Age and Roman era. Values of the French People:

The French take immense great pride in their nation and government and are typically offended by any negative comments about their country. Visitors, particularly Americans, often interpret their attitude toward foreigners as rude. The expression “chauvinism” originated in France and while women are playing a greater role in family life and business, many still see it as a male-dominated culture. The French embody romance and passion, and there is an open attitude toward sex outside of marriage. Even the country’s top politicians have been known to carry out extramarital affairs without making an effort to conceal them. As a reflection of the country’s secular nature, about half of children are born to unmarried couples. The French embrace style and sophistication and take pride in the fact that even their public spaces strike a regal tone. The French believe in “égalité,” which means equality, and is part of the country’s motto: “Liberté, Egalité, Fraternité.” Many say they place a higher importance on equality than liberty and fraternity, the other two words in the motto. Food in Daily Life:

Food plays a major role in the country’s social life. Wine and cheese are sources of national pride and reflect regional differences. Meals are ritualized, and full of social and cultural meaning. There are also political aspects to the meaning of food. For instance, there has recently been much concern about the quality of “engineered” food and a rejection of foods that have been genetically altered. Another recent concern has been la vache folle (mad cow disease); the French have rejected the importation of English beef, which has been a major issue in the EU. The three main meals are (break-fast), (lunch), and (dinner). Although the midday meal had great importance in an agricultural economy and is still the main meal in rural areas, there is a tendency for families to eat the largest meal in the evening. Breakfast is a light meal of bread, cereal, yogurt, and coffee or hot chocolate. Lunch and dinner generally involve several courses, at minimum a first course ( l’entree ) and a main dish ( le plat ), followed by cheese and/or dessert.

In restaurants, it is common to have a price that includes all these courses, with a choice of dishes. Children eat a snack after school, le goûter or quatre-heures, which usually includes cookies, bread and jam or chocolate, and a drink. Meals involve a succession of courses eaten one at a time. A typical family meal starts with a soup, followed by vegetables and a meat dish and then a salad, cheese, and dessert. Wine is commonly served at meals. Children begin to drink wine during family dinners in their early teens, often drinking wine diluted with water. Most daily food preparation is done by wives and mothers in family settings even if both spouses work full-time. The need to prepare wholesome meals that reflect traditional values is an increasing source of stress for working women who feel pressed for time. Convenience foods are becoming more prevalent, and fast food is a growing trend. Marriage:

Marriage rates and age at marriage are related to socioeconomic class and region. Overall, the marriage rate is declining and the age at marriage is rising. The average age of marriage for men is twenty-nine, and that for women is twenty-seven. Women tend to marry later when they seek higher education. Rural male celibacy has been associated with rural-urban migration since the 1960s. Geographic homogamy is a strong factor in marriage: Over half of all marriages involve partners from the same department. There is also a high level of religious homogamy. The divorce
rate has increased in recent years, especially since a 1975 law that made the process easier and faster. One in three marriages ends in divorce. All marriages are sanctioned by a civil ceremony in the town hall. Religious ceremonies must follow the civil ceremony, so that frequently wedding parties make the trip between mayor’s office and the church. Payment for the weddings of young people is most often divided equally between the families of the bride and the groom. There has been a rise in cohabitation for unmarried couples. A recent law permitting legal unions that are not marriages for couples has given legal status to cohabitating couples, including homosexual couples. The PACS ( pacte d’association civile et solidaire ) law, passed in 1999, set up an intermediate union between marriage and cohabitation. A pacte is easier to dissolve than a marriage. Religious Beliefs:

Catholicism is the predominant religion of France — about 80 percent identify themselves as Catholic — but the country is fairly secular and the vast majority of those who affiliate themselves with the religion do not attend mass regularly. Other main religions include Islam, practiced primarily by immigrants from North Africa, Protestantism and Judaism. French clothing:

Paris is known as the home to many high-end fashion houses; the French people are known for their understated elegance in clothing. Many French people dress in a sophisticated, professional and fashionable style, but it is not overly fussy. Typical outfits include nice dresses, suits, long coats, scarves and berets. French art:

Art is everywhere in France — particularly in Paris and other major cities — and Gothic, Romanesque Rococo and Neoclassic influences can be seen in many churches and other public buildings. Many of history’s most renowned artists, including Spaniard Pablo Picasso and Dutch-born Vincent van Gogh, sought inspiration in Paris, and they gave rise to the Impressionism movement. The Louvre Museum in Paris is among the world’s largest museums and is home to many famous works of art, including the Mona Lisa and Venus de Milo. Holidays and celebrations:

The French celebrate the traditional Christian holidays of Christmas and Easter. They mark May Day, also known as Labor Day, on May 1. Victory in Europe Day on May 8 commemorates the end of hostilities in Europe in World War II. Bastille Day is celebrated on July 14; the day the Bastille fortress in Paris was stormed by revolutionaries to start the French Revolution.

Conclusion
According to Hofstede’s website, the four dimensions of France shows that the Power Distance (PDI) is 68% – high, the Individualism (IND) is 71% – individualist society, the Uncertainty Avoidance (UAI) is 86% – high, and the Masculinity is 43% – feminine culture. The country tends to be (high context), by Edward Hall’s Low-High context Approach.

The Culture of France. (2016, May 17). Retrieved from https://studymoose.com/the-culture-of-france-essay 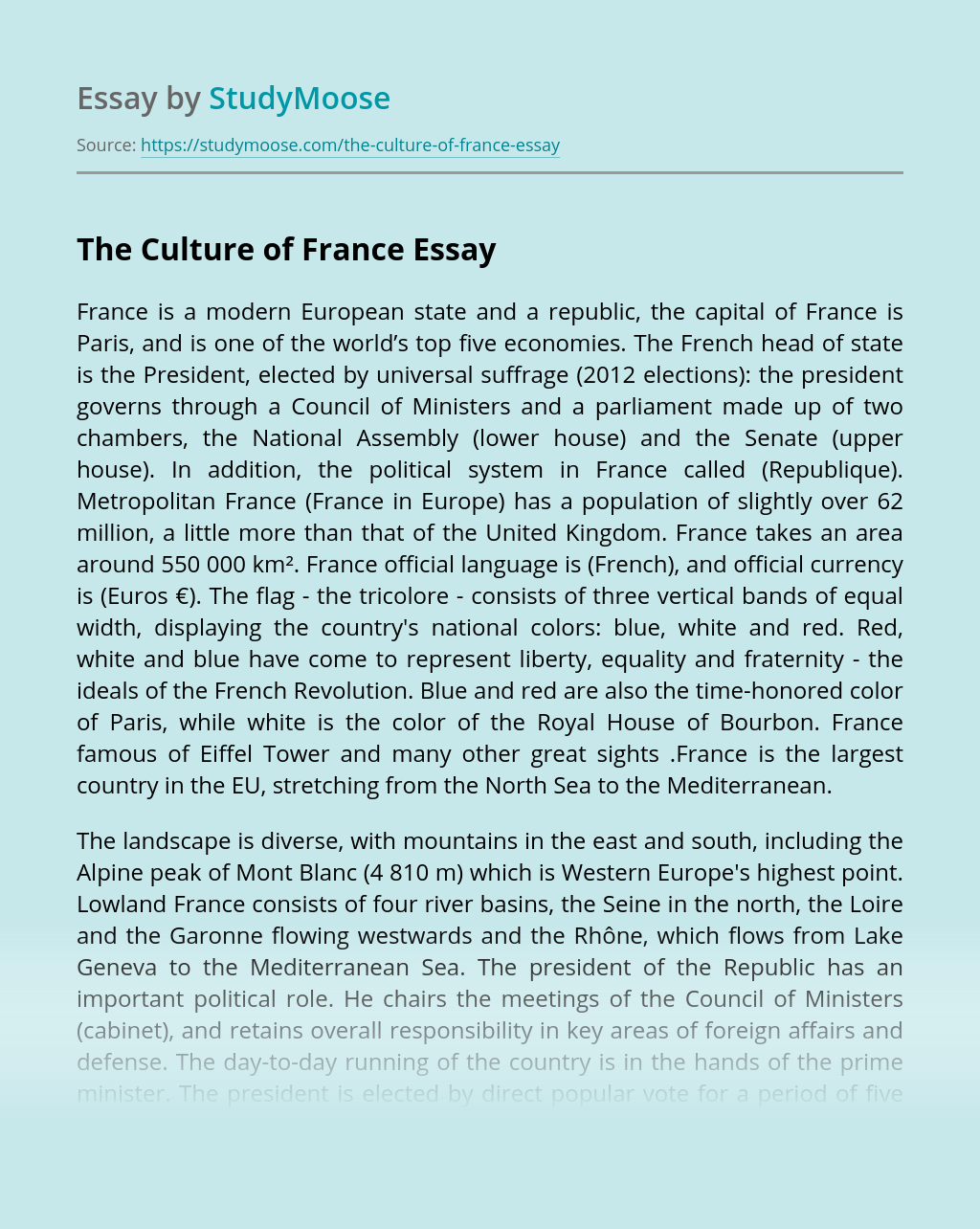 View sample
The Culture of Hooking Up

In 1997, a Brown University student expressed to The New York Times,” In a normal relationship, you meet, get drunk, hook up” (Stepp 33). Today college students are living in an environment saturated with sex. With tools such as the Internet, media and numerous of other sources producing sexual content, students are exposed to this...

Quotes Headmaster: Why are you dressed as a milk man? – Shows lack of understanding for the young boys who remain in a working class Headmaster: There Clever however they do not have Crass. Ms. Lintot They understand there things. But they Lack Flare. Hector: All Knowledge works even if it does not serve the...

The movie The Namesake explored many issues with regards to culture and the relationships in which we create within different cultures. Throughout the movie issues with parents, partners, different cultures and death all play a key role in purveying the messages the director wanted to get across. When the Ganguli family has to move from...