Air France – KLM: Changing the Rules of the Game

Introduction
Air France-KLM Case (Som 2009) provides the background for airlines industry and factors impacting companies’ positions, details about the history of air-carrier alliances and their challenges. The main focus of the Case is on two companies: Air France and KLM and their decision to merge despite predictions of failure. The period covered by the case ends in 2006. As most aviation companies worldwide were struggling and losing profits, Air France-KLM was confidently gaining market shares, improving growth and financial performance. The purpose of this report is to identify and analyze the key challenges of the aviation industry and Air France-KLM merger; evaluate options and offer recommendation on how to achieve stronger position and withstand economical pitfalls (oil prices, political pressure, and competitor’s rivalry).

Don’t waste time
Get a verified writer to help you with Air France – KLM: Changing the Rules of the Game
Hire verified writer
$35.80 for a 2-page paper

Politic Sub-factors: Governments of most countries have a strong influence over air-carrier business.

For example, Civil Aeronautics Board regulated airlines prices until 1977. Most of the companies were government owned or subsidized without regard to the profitability of the carrier. Countries’ air space was restricted for use by the national air-carriers and access by foreign carriers was restricted. Changes came with the trend of privatization of national carriers. Ratification of the Deregulation Act in 1978 by the US Congress had changed the airline industry market landscape. According to Spinetta (2006), the European market became a Single Market removing restriction to all carriers.

Economic factors: The airline industry is heavily dependent on the cost of fuel, number of travelers and economical factors such as unemployment and household disposable income. Introduction of alliances provided a solution to overcome these restrictions and regulations, widen access to the restricted markets and offer cost reduction to the member companies achieved through combined codes, reduced number of flights, simplified transfers and ticketing, reduced fixed costs. Offering combined frequent flyer programs attract more passengers.

Reduction of service centers and reducing employment is a very unpopular measure in Europe and difficult due to the union’s activities. Social-cultural factors: Improvement of lifestyle, growth of tourism, additional free household income and simplified travel within European Union affect the airline industry. Traditionally, each European country has its own airline even though some of them are heavily subsidized by the government and not profitable. Since 1997 global alliances became standard practice for the industry, but not the mergers similar to Air France-KLM.  Technological factors: The aviation industry is highly dependent on technological improvements. Development of fuel efficient aircrafts improves fuel consumption and reduces fixed costs. Expending the aircraft capacity improves performance of airlines core business of the number of passengers and cargo, thus increasing revenue and cash flow.

Environmental factors: Public health, food and health and regulations, traffic safety, sustainable way of doing business are important factors impacting airlines strategies. Legal factors: There are many factors affecting the airlines, for example access to the American market was closed until 1978 when the Deregulation Act was approved by Congress. European Union countries share the laws and regulations. Summary of Findings: PESTEL analysis allows evaluating the environment in which the company operates and the industry landscape projection on the future. Yüksel (2012) discusses use of weighted measures of each PESTEL factor which improves accuracy of the results and it is recommended to use for more detailed analysis.

Buyer Power: Frequent flyers programs decrease buyer’s power. Ups and downs of the economy influence household income available for leisure travel. Low-cost companies regulate the cost.
Supplier Power: Boeing and Airbus are the two main companies that supply global aviation companies. The fleet is usually renewed once a decade and every aircraft is very expensive. In 2006 Air France-KLM had 565 aircrafts in operation with 225 destinations. New Entrants: The barrier for new entrants is high due to high competition, government regulations, high fixed and start-up costs; complicated exit strategy due to unionized work force.

Substitutes: A number of large and discounted airlines are available for passengers to choose. Other transport options are available; however, airlines provide the fastest way of long and medium distance travel. They are usually substituted by the alternatives for short distances. Cargo services, warehouses, training and maintenance programs are also core businesses for airlines in addition to carrying passengers.

Industry Rivalry: in 2007, 249 airlines were registered globally, with 100 airlines spread between 30 European countries. This creates a high rivalry between the airlines.

Analysis Summary: Aviation industry is highly regulated with strong and increasing buyer power. The barrier for new entrants is high. The supplier power is strong but weakening as AirFrance-KLM benefit from the economy of scale and strong bargaining power. The company protects oil prices by purchasing cost fixing insurance. There are substitutes available but air travel remains the preferred option for business travelers and fast cargo delivery.

 Both CEOs share company and industry future vision and offensive strategy. (De Wit & Meyer 2010, p. 397-400)
 Use of non-discriminating policies and promotion of stronger branding. Synergy in IT systems.
 Guarantees given to the stakeholders. Strong financial position.

 Alliance attracted such companies as Aeroflot
 Dependency on fuel cost and economical which opens huge Russian market. fluctuation.
 More companies may be acquired or enter the
 European countries do not increase the partnership with the merged Air France-KLM. runway capacity.
 Improved routs offering achieved by reduction of  Possible threat of integration between redundant flights. Expenditure of network. Northwest and Delta which may create a high rivalry in North America.
 Economy of scale in bargaining with the suppliers

Recommendations
The recommendations would be to continue investment in the latest technologies, including IT; renew the fleet to reduce fuel consumption and improve defect-free customers experience; secure locked fuel prices, build partnerships to extend long distance flights options; balance the network offerings between the continents; focus on stakeholder’s, employee’s and customer’s needs; consider strategic partnerships with other airlines; continue increasing market share and improvement of free cash flow and strengthening of financial position.

Air France – KLM: Changing the Rules of the Game. (2016, May 20). Retrieved from http://studymoose.com/air-france-klm-changing-the-rules-of-the-game-essay 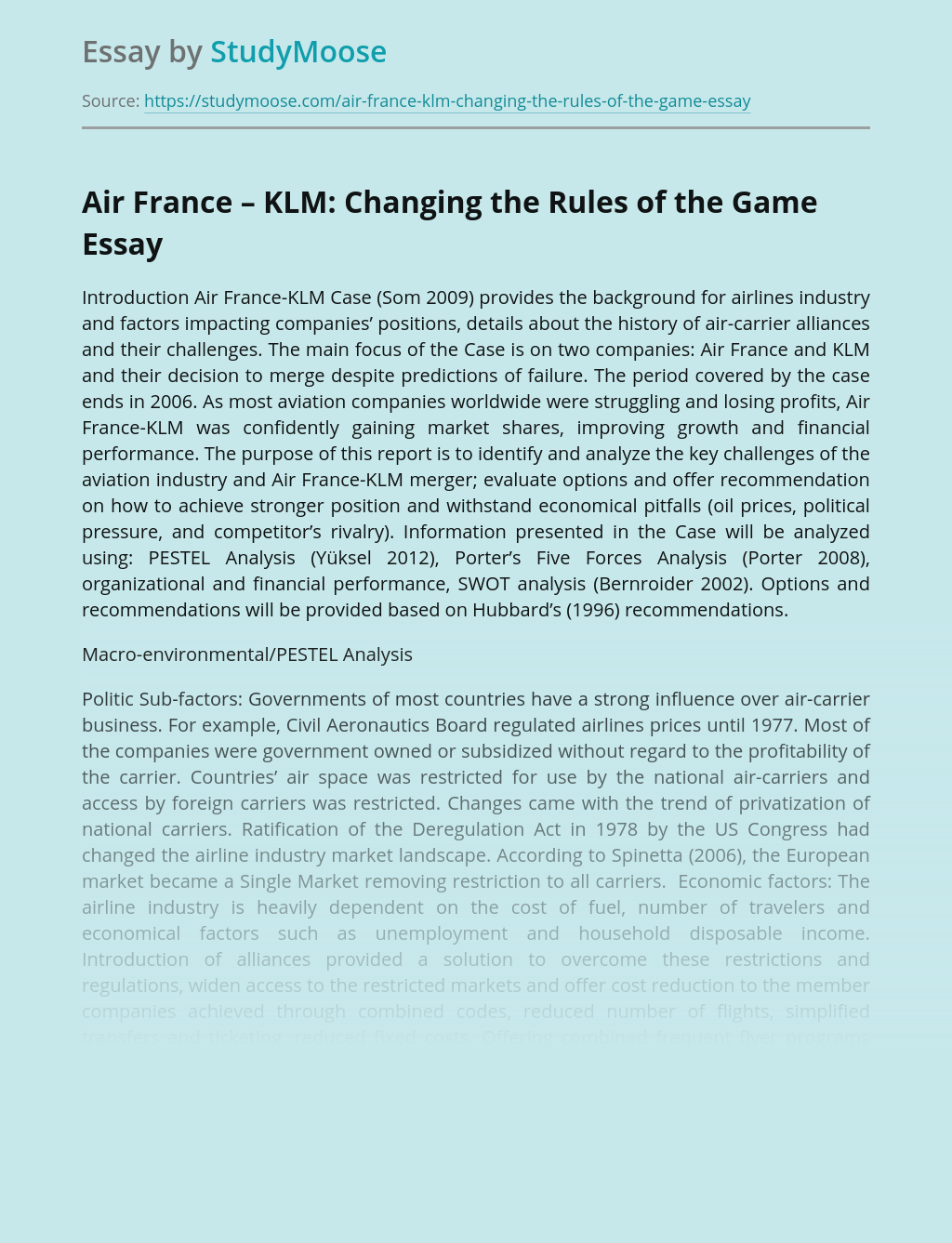 Don’t waste time
Get a verified writer to help you with Air France – KLM: Changing the Rules of the Game
Hire verified writer
$35.80 for a 2-page paper
Stay Safe, Stay Original