Cultural Differences Between the United States and France

1. Using Hofstede’s four cultural dimensions as a point of reference, what are some of the main cultural differences between the United States and France?

Some of the main cultural differences according to Hofstede’s are that France has a high power distance meaning that in these countries people blindly obey the orders of their superiors. In contrast of the United States, which have a lower power distance meaning, that they have lower strata of the workforce but often with highly qualified people.

Don't use plagiarized sources. Get your custom essay on
“ Cultural Differences Between the United States and France ”
Get custom paper
NEW! smart matching with writer

2. In what way has Trompenaar’s research helped explain cultural differences between the United States and France?

As for Trompenaar’s research both countries are high in Universalism meaning that the focus is more on formal rules than on relationships, business contract are adhered to very closely, and people believe that a deal is a deal.

The difference among the countries begins with the High Individualism for the United States. This views people regarding themselves as individuals. For Individualism people ideally achieve things alone, and they assume a great deal of personal responsibility. In contrast of France Communitarianism referring to people regarding themselves as part of a group. For Communitarianism decisions typically are referred to committees, people achieve things in groups, and they jointly assume responsibility. The study of these differences is similar to Hofstede’s Cultural Dimensions however not quite the same for some countries.

Another difference between both countries is that the United States has an Achievement culture. This culture refers one in which people are accorded status based on how ell they perform their functions. Achievement culture gives high states to high achievers meaning that people who work more at the end they will have a pay off for their extra effort. In contrast of France that has an Ascription Culture that refers to which status is attributed based on who or what person is. In this type of culture an individual may have high states because of the longevity in a company or simply has a better status for the people they know. In other word if they have connections they get a better status.

3. In managing its Euro Disneyland operations, what are three mistakes that the company made? Explain.

The mistakes Euro Disneyland operation had were mainly handling French Culture: 1. Alcohol ban in a culture that having wine is like a religion 2. Disney strict appearance code for employees. The European culture is more open with piercings, tattoos etc. Disney made a handbook of detailed rules on acceptable clothing, hairstyles, and jewelry. This upsetting because French complained that Americans were so insensitive with French Culture 3.

Difference in language where the French firms felt strangers in their own country. As an example to this, having French workforce means that their language or accent is not going to be perfect to English speakers or “Disney Culture.” To exemplify more, whenever an employee tried to practice “Howdy!” in a cowboy environment, he mispronounced the word to something close to “Audi.” This could have created a major problem with Disney’s sponsors like Renault. Also Disney placed its first ads for work bid in English, leaving small and medium sized French firms feeling like foreigners in their own land.

4. Based on its experience, what are three lessons the company should have learned about how to deal with diversity? Describe each.

One of the lessons Euro Disney faced was putting the park in charge of a French local (Bourguignon). Something that the Tokyo Disney top management handles it well. At the beginning an American was in charge of operations in Euro Disney. Even though he was well identified with the culture is not the same having a local in charge. Second they learned that they had to adapt their “Disney Culture” more to the European Culture. By trying to change policies like allowing wine for dining purposes and get rid of some uptight dress codes. Third they learned that with seduction they could establish god relations with local residents that would benefit the park in the long run.

Cultural Differences Between the United States and France. (2016, Jun 13). Retrieved from https://studymoose.com/euro-disney-case-essay 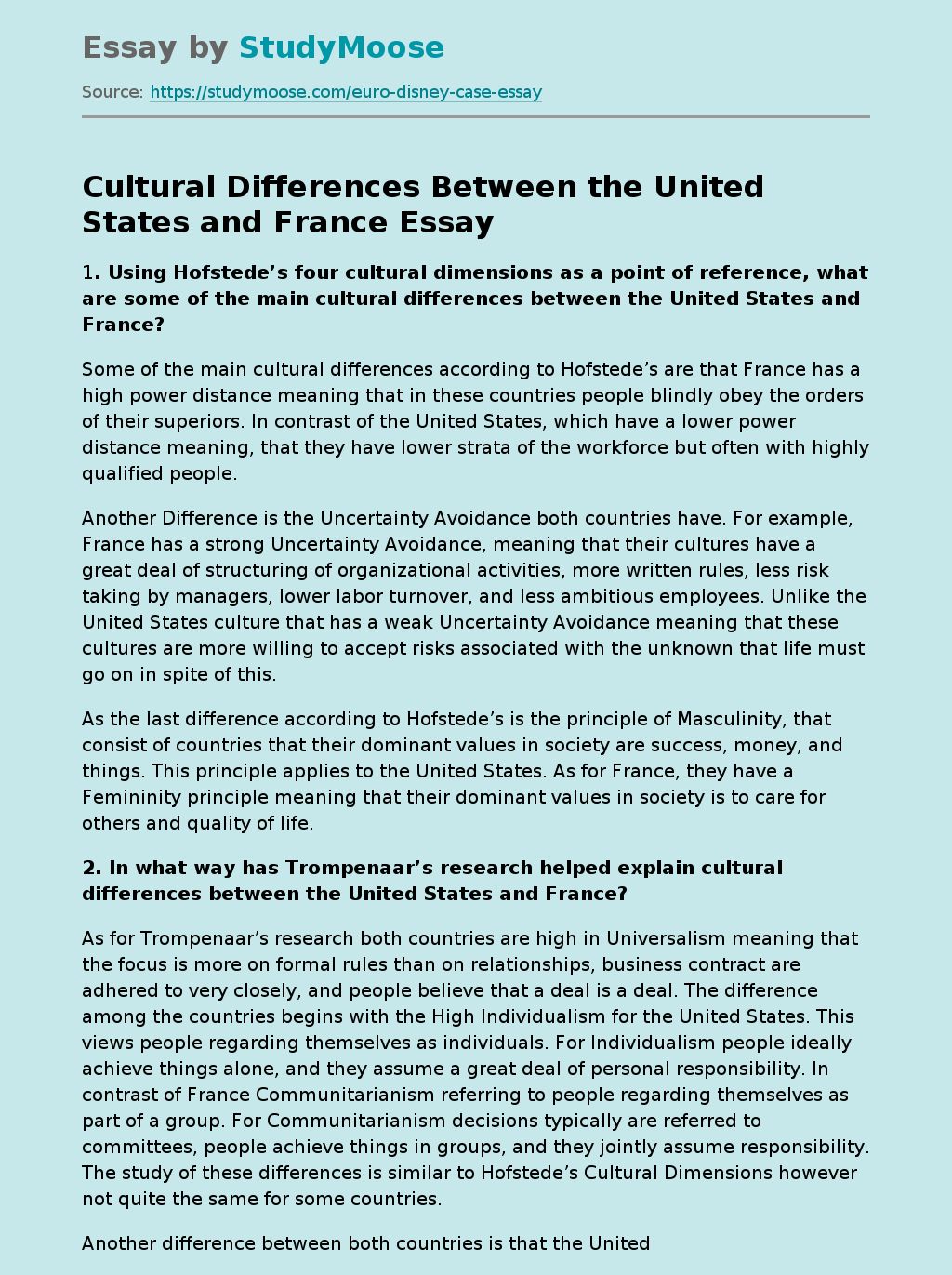