Why Phones Don't Belong in School?

Cell phones have been popular since they came out, but now with all of the applications on smart devices, they are a huge problem in schools. Around the world, cyberbullying is becoming an immense issue and allowing phones in classes is only fueling the flame. Not allowing phones in the classroom would help students maintain a healthy screen time limit. Classrooms are meant to be a place of learning, but cell phones are making it difficult for students to pay attention and retain information.

Don't use plagiarized sources. Get your custom essay on
“ Why Phones Don’t Belong in School? ”
Get custom paper
NEW! smart matching with writer

Cell phones are an issue and need to be banned from classrooms.

To begin students spend around seven hours a day in school. This means that ending the use of phones in the classroom would result in seven cyberbullying-free hours, per day. 37% of people between 12 and 17 have been bullied online. 23% of students have admitted to bullying online. 60% of young people have witnessed online bullying. This is an issue that needs to be addressed now. It is proven that young people who experience cyberbullying are more acceptable to self-harm and suicide.

Furthermore, health experts have concluded that a healthy screen-time limit for people older than four is one to two hours per day.

In 2019, the average screen time for people between 8 and 18 is seven-plus hours per day. If we could possibly end even 4 of these hours, teenagers would experience a much healthier lifestyle. Studies have proven that teenagers suddenly spending so much time on electronic devices is most likely the cause of an ongoing flow of depression, anxiety, and suicide that began right after smartphones became widespread among teenagers. Students need some time throughout the day that regulates screentime to decline this outburst of depression, anxiety, and suicides. Is there no better time in the day to regulate screen time than during school?

In conclusion, cell phones in school have more disadvantages than advantages and should be banned. Phones in schools stimulate the increase of cyberbullying. Regulating phone during school hours would help students maintain a healthy screen time limit. Having phones during a class concludes with retaining less information and doing worse on an exam.

Why Phones Don't Belong in School?. (2020, Nov 24). Retrieved from http://studymoose.com/why-phones-don-t-belong-in-school-essay 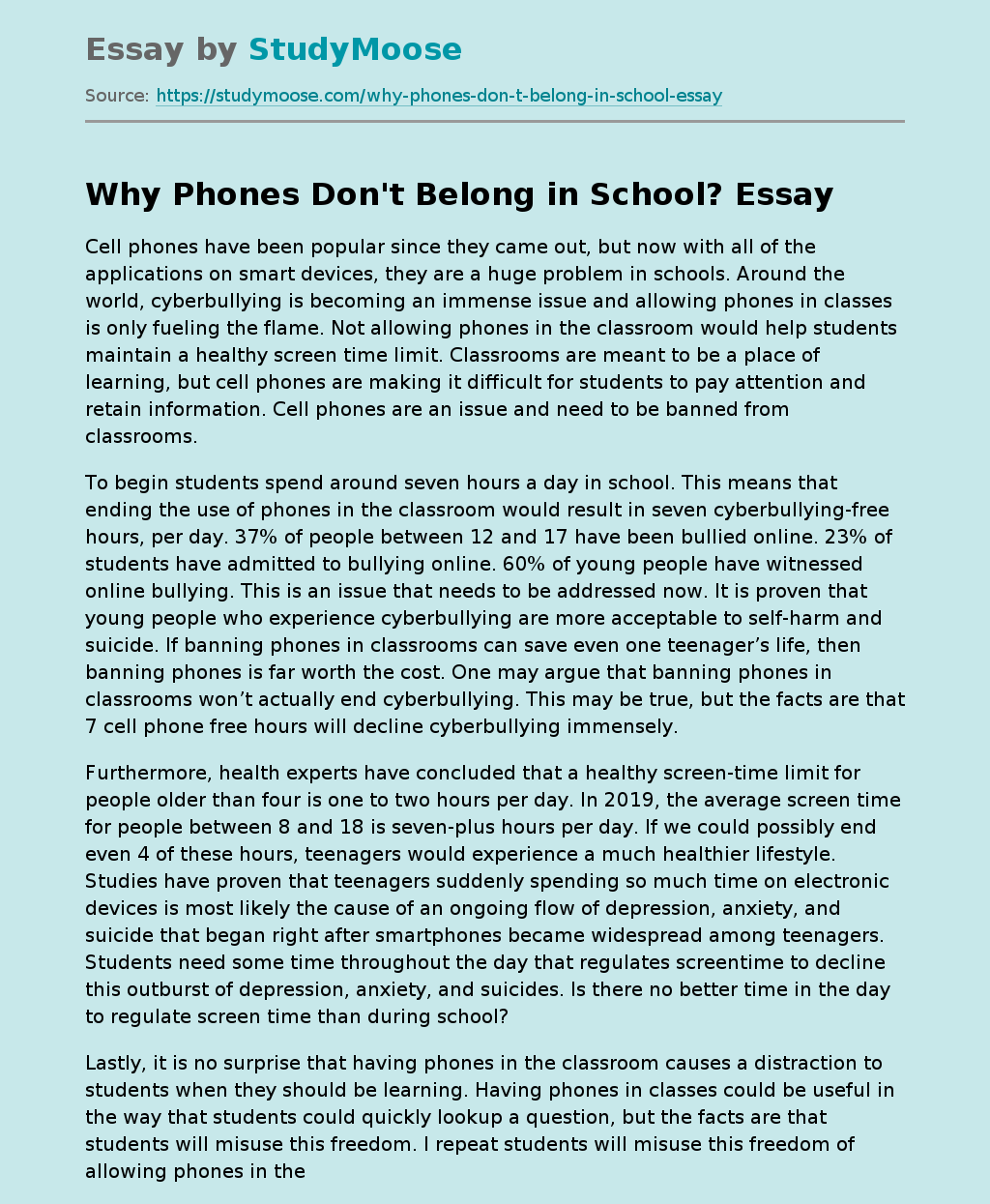