Lehman Strauss’s article ” Why God Became Man” entails several arguments as to why the incarnation of Jesus Christ happened in the manner in which it did. Mr. Strauss states many truths that were affirmed by early church doctrine. The author base his statements on facts that even the Council of Chalcedon stated that Christ was both truly man and truly God. The author also use biblical references and Scriptures to come to conclusion of his theology. Strauss constructs his arguments by using the Bible to support whether or not something is God’s truth for if God reveals something in his own word then it must be, because God does not lie or deceive.

Don't use plagiarized sources. Get your custom essay on
“ Why God became man? ”
Get custom paper
NEW! smart matching with writer

These points are used to reveal why and what Christ accomplished when He manifest as a man on this earth and dwelt among us. For example, Strauss states that Christ could not have been born through any other means other than by virgin birth, because by being born of a virgin He retains His humanity, but is not born into sin as with the rest of the human race. Strauss main focus Philippians 2: 5-11 was key points, because it highlights the incarnation facts on “How He made Himself of no reputation,” “He took upon Him the form of a servant,” “He was made in the likeness of men,” “And being found in fashion as a man,” “He bumbled Himself,” “He came obedient undo death,” and “Even the death of the cross.

” The author show the humanity of Christ. In his exposition of verse 6, Strauss proclaimed the following that in a sense disproves the whole of Arian and Jehovah Witness thought when he stated; “He thought it not rovvery to be equal with God.” The eternal Son did not consider it a thing to be seized unlawfully to equal with the Father.”

Another excellent strenght of the Strauss article is seen in his treatment of the unbeliever and their rejection of Christ the eternal Savior. Here Strauss uses classical Pauling language in describing the rebellion of the unbeliever when he writes; “Men may hinder or suppress the truth by their unrighteous living, but there is that which may be known of God which ‘is manifest in them.” (Rom. 1:18) I like the fact that Strauss did a fine job in presenting the different views of incarnation. Strauss held firm to the Christian worldview throughout the article and toed the line autonomous with Bible text to support his argument he set forth. He also did a good job exegetically of his break down of Philippians 2 text in his explanation of the incarnation of Christ. I really enjoyed this reading of this article.

The plurality in the Godhead is vital for understanding the biblical teaching, “God is love” (1 John 4:8, 16). A Unitarian God, such as Islam’s Allah, could not be a God of Love in his nature, since by definition love requires another person to be the recipient. Allah might conceivably be able to love after he created, but that would make love contingent on creation, not an intrinsic property of Allah. But with the true God of the Bible, the love between God the Father and God the Son has always existed, even before creation. Furthermore, the Bible reveals a third person who is God, the Holy Spirit. This enables an even more perfect love that includes not only individual love, but collective love. This is the sort that should occur in a family, where the husband and wife love not only each other, but combine their love towards their child. Jesus’ existence didn’t begin with His birth or conception, but pre-existed Creation, as made by Him and for Him. Jesus was both with God and God Himself.

That such a divine Person exists is taught throughout Scripture, starting in Genesis. The plurality within the Godhead makes it possible for God to be intrinsically a ‘God of Love’. In Jesus, God took on human nature, so He could die for our sins as a fellow human, taking the penalty we deserve for our sins. In fact, this was planned from Eternity, as the names of the Redeemed were already written in His Book of Life from the foundation of the World. When Jesus took on humanity, this was an addition to His divine nature, not a subtraction of His divinity. Thus everything He taught, He taught with authority—including about Creation and the Flood. 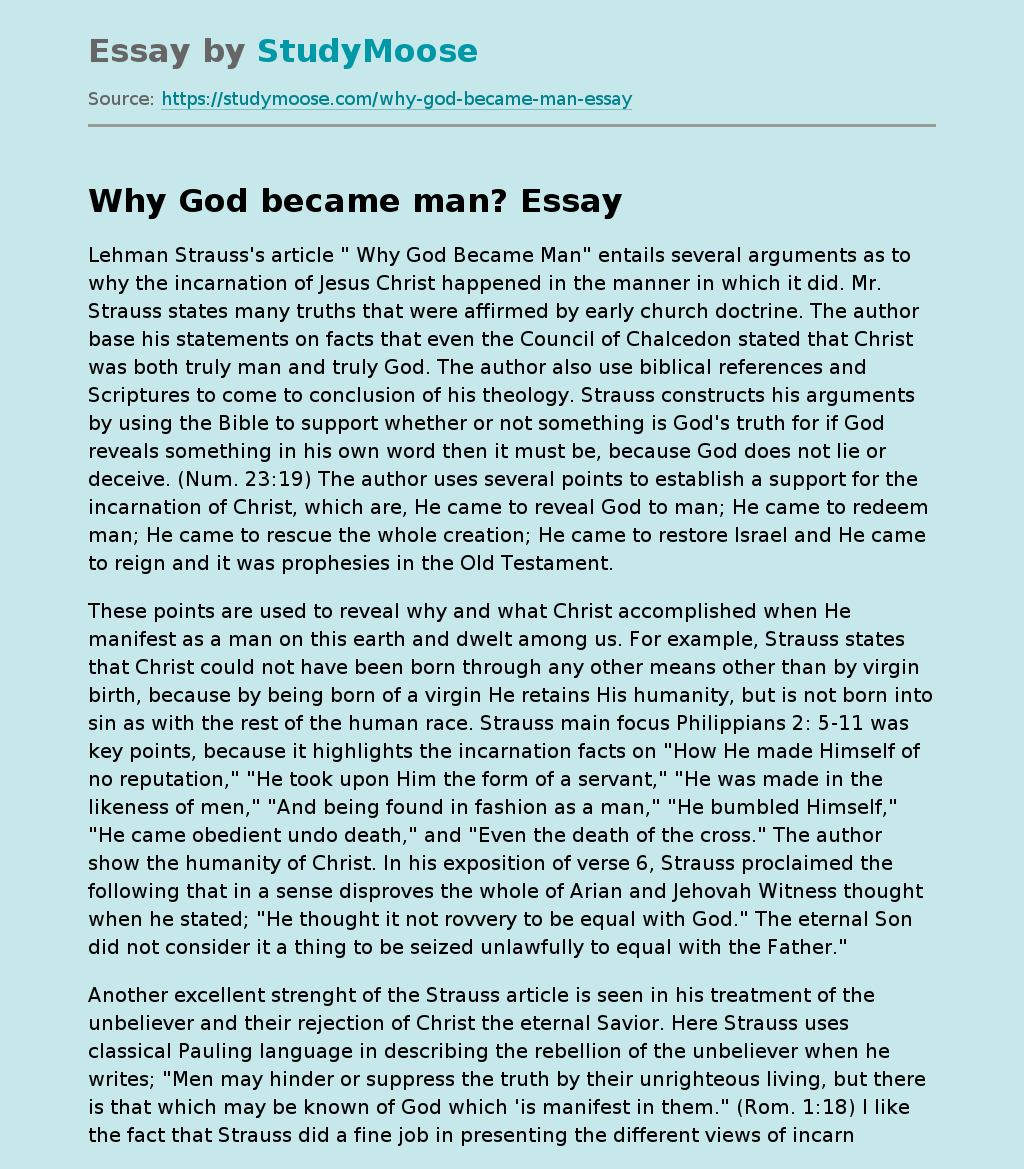