Who Is Amanda Knox?

The muder of Meredith Kercher was covered very differently from beginning to end. Media bias was present on both sides of guilty and not guilty. The story was hard to keep straight as information was either left out or presented falsely. News articles presented soon after a story, is useful for awareness of the issue; however, exact details are generally not presented fairly or true fully. An article written in 2007 was one of the first published after the murder of Meredith Kercher.

Don't use plagiarized sources. Get your custom essay on
“ Who Is Amanda Knox? ”
Get custom paper
NEW! smart matching with writer

This article has valid information; however, important details were left out which made Amanda seem guilty. NBC did a respectable job at walking the reader through Merediths murder. They mentioned suspects, cause of death, and interviewed detectives, suspect’s friends, relatives, and Meredith’s family. Meredith was murdered the night of November 1, 2007. Stabbed in the throat with a knife after refusing to play in a drug induced group sex game, she was found November 2, a horrific bloody, half naked mess.

Police concluded that the knife wound caused her to drown in her own blood leading to misery and pain that could have lasted for over two hours (Murphy Denis).

There are four suspects for the murder of this young woman: Rafaelle Sollectio, Patrick Lumumna , Amanda Knox and Rudy Hermann Guede. Rafaelle, a computer engineering student, was Amanda’s boyfriend during the time of the murder. When questioned by the police, Rafaelle claimed he was at home downloading stuff onto his computer. Rafaelle sticks to this story throughout the entire court case and trial.

Lumumna, an African man, was the bar owner where Amanda worked.

He had lived in Perugia for almost 20 years, and never left upon graduating. Amanda and Lumumna did not get along very well. He considered her lazy and complained of her constant flirting with customers (Murphy Denis). Amanda claimed that Lumumna was present at the crime scene and that is how he became involved. No evidence was present to back up Amanda’s claims, so charges were dropped almost immediately.

Amanda Knox was a study abroad student coming from Seattle, Washington. Amanda who is the prime suspect, changed her story over and over again during the first few weeks following the murder. Her first story was that neither she nor her boyfriend, Rafaelle, were present at the apartment during the murder. She says they were at Rafaelles smoking pot and having sex ( Murphy Denis).

Just five days later her story changed again. She claimed she was present at their apartment as well as Lumamna, who she claimed killed Meredith. However, during her court trial, she confessed that Lumumna was never present and that she made the confession up. Her final confession came back to the first: that she was never at the apartment the night of November 1, and that she didn’t remember much of the night because of the weed. Another thing covered in Denis Murphy’s, NBC news article was hat Amanda claimed to have returned on the morning of November 2nd and saw traces of a break in, blood on the carpet, but was not alarmed. Amanda then showered and returned to Ralealles houses.

They both returned to the apartment around 12:30pm when the police showed up and broke down Meredith’s door to find the gruesome murder scene. Murphy, an NBC news journalist, did a great job of collecting quotes from both sides of Amanda’s personality. When asked about Amandas personality traits, Alexandra, a friend of Amanda’s, stated “Generous, kind, genuine, optimistic bubbly. Pretty much all the good words that you can find in the dictionary, she was” (Murphy Denis). Another friend, when asked what he remembers most, expressed, “I think about her smile and how beautiful it was. It just reflected her beautiful personality” (Murphy Denis).

However, another friend told of how often Amanda was trusting of strangers, he said, “She is a bit trusting and overly optimistic. It’s sort of like why shouldn’t I trust that person? . . .” (Murphy Denis). Her friends repeatedly described her as fun loving, energetic, and outgoing, as well as bragging about her moral character. All who knew Amanda were shocked when told that she was a suspect in a murder case. This, however, could not save Amanda from being convicted.

Other quotes from the same article describe the reasons that Meredith and Amanda did not get along. Meredith was constantly fearful of the men that Amanda would bring home. The article stated, “And more worrying was the parade of men Amanda was bringing back to the cottage” (Murphy Denis). This strongly worded quote is very biased, it never states the number of men brought back to the cottage, the word choice used portrayed Amanda as a whore. One more suspect of the murder was of Rudy Guede, the only one who had no relation to Amanda. Rudy was born in Africa, but had lived in Italy since the age of five.

His confession stated that he and Meredith had a date planned for the night, which ended in consensual sex. He claimed that after returning from the bathroom, he heard Meredith screaming, and saw an Italian looking man he had never met before, holding a knife in his left hand. They ended up in a
short fight which left Rudy with a cut on his hand and Meredith’s dying body in the other room. Rudy claimed that he held Meredith until her death and her dying words where “aff” (Murphy Denis). The evidence presented in the article concluded that: first, the break in was planned. Second, Rudy was without a doubt at the crime scene.

There was a trace of his DNA on the victim’s bra and also at the house. Third, there was a tread mark of a Nike shoe exactly, the same size as ex-boyfriend Rafaelle (Murphy Denis). The article never said flat out that Amanda was the murderer, but after reading the article, any one would be ready to convict Amanda, Ralaelle and Rudy of the murder of Meredith Kercher. What the article fails to mention is why Amanda’s confessions changed, and how valid the evidence really was. Another article published in 2009 described Amanda as day dreamy, confused, and insensitive in many ways.

Photographs were taken a few weeks following the murder of Meredith, and causing alarm and bias towards Amanda, portraying her as a cold blood killer. These include her performing “cartwheels” in the lawn, “making out” with her boyfriend, and smiling in the court room. These are more examples of how media can grab hold of an idea and change, and manipulate it into a top selling story. An article published later in 2009 explained Amanda’s behavior as normal, and blown out of proportion.

Her “cartwheels” were simply reduced stress yoga, the making out was simply Rafaelle trying to comfort her, and last the smile in the court room was directed to her father and lawyer, trying to show strength and love. In the same article Amanda also gives incite as to why her statement had changed. “She “[Amanda]” accused Italian police of hitting her and repeatedly calling her a “stupid liar,” bullying her into a false statement on the fifth night after the murder she has been charged with” (Burleigh, Nina).

Amanda also stated that she was never informed that she was a suspect; she claims that she was falsie informed and was asked to imagine that she was present at the murder, and describe what happened. Amanda was given false information and abused; this is what leads to the false testimony. This also shows how media can take something without all information and us it to sway readers (Burleigh, Nina). In the same year Amanda is allowed to describe why she showered instead of calling the cops right away.

Amanda states that the door was only open not broken into also that, she noticed the blood after the shower and immediately called Filomena Romanelli a trainee lawyer who lived in the same hillside apartments cottages. Nick Squires, news journalist, interviewed Filomena and asked about the phone call. Filomena stated “She told me ‘It’s very odd. I’ve just come back to the house and the door is open. I had a shower but there’s blood everywhere. I’m going to get Raff. Meredith is nowhere to be seen.

Oh God, maybe something’s happened to her, something tragic,'”( Squires, Nick). This quote shows Amandas panic and stress. It looks at Amanda in a new light. Media can be very bias, after reading the article printed soon after Meredith was found, it would be hard to argue that Amanda had not contributed to the murder of the roommate. However, four years later her and her ex-boyfriends are allowed to walk free. Detailed information is hard to straighten out in a short amount of time. Information presented early is not as valid as information presented later on in the story, however it does give a heads up as to what is about to come. 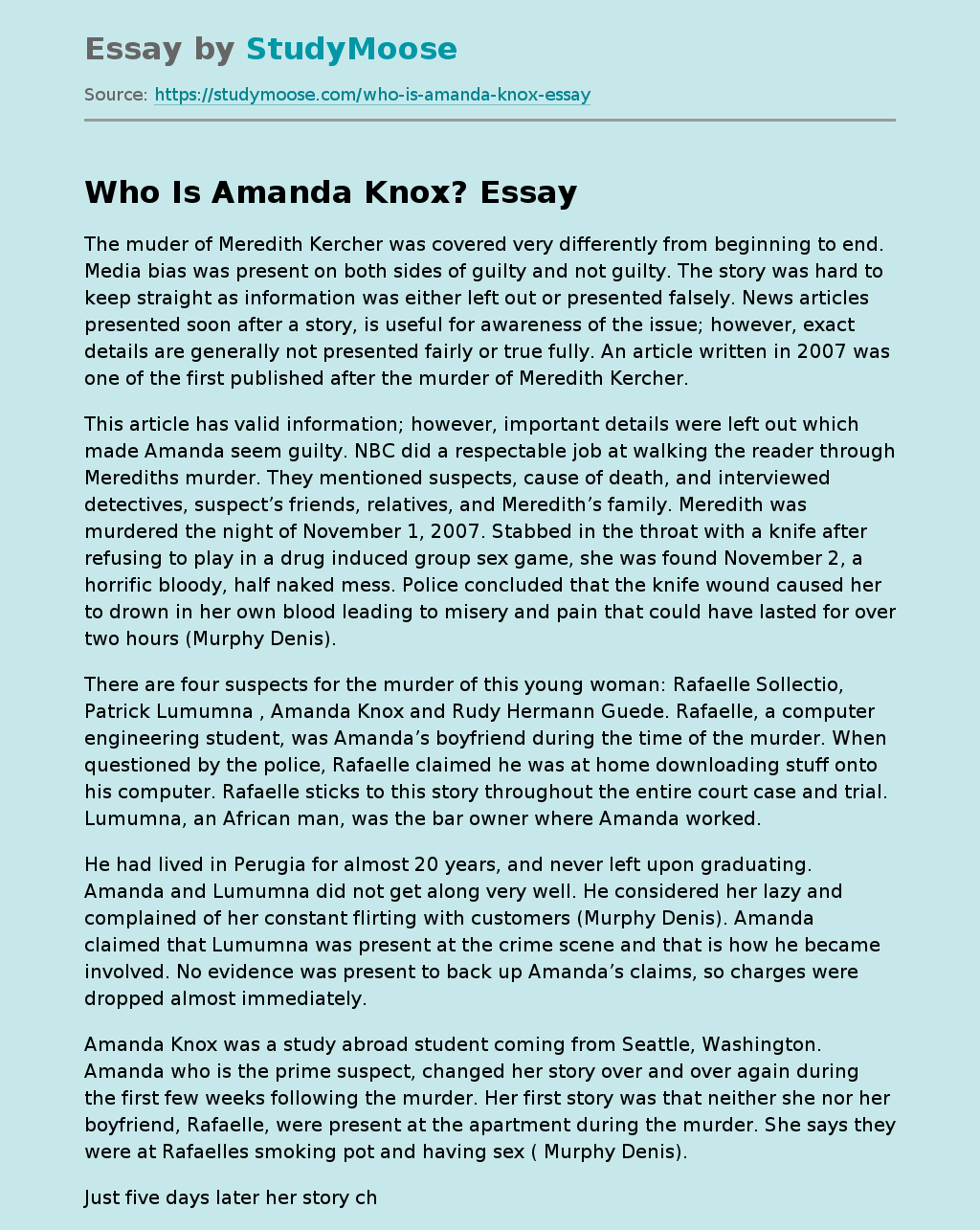