Amanda Knox grew up and attend school in Seattle, Washington. She attended college at University of Washington to pursue her degree in linguistics. Per Biography (2019), Amanda Knox was an ordinary college student. She threw loud parties, was named to the Dean’s List, and worked several jobs to pay her tuition. Friends recall her as a kind, gentle individual. While attending the University of Washington Amanda decided to study abroad so she could further her studies in linguistics. She moved to Perugia, Italy to attend the University for Foreigners.

Don't use plagiarized sources. Get your custom essay on
“ Amanda Knox grew up and attend school in Seattle Washington She attended ”
Get custom paper
NEW! smart matching with writer

Meredith Kercher was her roommate and she was also studying linguistics. They study and party together in Italy. Amanda met a man name Raffaele Sollecito she soon started dating. Kercher was murder and Knox and Sollecito were the suspects. What was Knox motive to kill her roommate? An investigation and trial are on the way.Do you think that Amanda Know guilty or not? Explain your answer. Amanda Knox was not guilty in the murder case of her roommate Meredith Kercher.

There were several things that took place that could went wrong. According to Biography (2019), Two officers soon appeared at the scene; they were postal police officers, used to investigating postal crimes, not murder investigations. During a criminal investigation the first thing the officers should have done was secure the crime scene and called the criminal investigation officers to come and investigate the crime scene. They needed to establish their crime scene boundaries. That did not happen because the two officers went directly to the victim’s room discovered the body but never protected the evidence in the room or the apartment.

The evidence was mishandled in this case. No evidence pointed to Knox According to Lasley, Guskos, and Seymour (2014), investigators must be able to understand and apply the following concepts; science, psychology, communication, law, ethics, and economics (pg47). If they do not understand and apply these concepts the crime scene can become a playground for them and lead to them not having enough evidence. In the case against Amanda Knox this is what happen. Evidence is the key when you are trying to convict someone of any crime. According to Timeline: Meredith Kercher murder case (2016) After being caught without a train ticket in Germany, Rudy Guede, a drifter originally from the Ivory Coast, is extradited to Italy. A vaginal swab taken from Kercher matches DNA from Guede. Guede admits to police that he had sexual relations with Kercher but says another man killed her while he was in the bathroom. This places him at the crime scene during the time of Meredith Kercher murder. How does he know another man killed her? Did he witness her being killed and flee the scene without calling authorities? Had this case occurred in the United States, what would have been different regarding the handling of criminal appeals? Discuss the difference in the court systems. If the cased had occurred in the United States things would have been much different starting with the investigation and evidence. Especially the interrogation. There were so many things wrong in this case. Some of those things are lack of motive, evidence, DNA, no witnesses, doubts about the murder weapon, and false confession would made things different in the United States. In the United States a defendant can file an appeal if they feel they did not have a fair trial. In Italy if an offender is found guilty, they can file for an appeal. According to Neubauer and Fradella (2014), in the United States Defendants cannot appeal on the grounds that they are innocent (pg.156). In the United states the appeals court focus on the rule of law and not if the defendant is guilty or not. According to the Laws and Courts in Italy (2019), If the appeal fails, it may be possible to appeal to the supreme court, but only on the grounds of the wrong interpretation or application of the law by a judge. In the Amanda Knox if she was found guilty in United States legal system, she would have a right to appeal the decision of the lower courts. After the higher courts reviewed the case, they would have to decide if she deserve a new trial. Because in this this case she was granted a new trial the prosecution has to make sure they can get a conviction. According to Neubauer and Fradella (2014), If the appeals court order a new trial and the prosecutor determines that a conviction may not be possible given instruction to correct the judicial error, the prosecutor may drop the case and not file charge. against the defendant for another trial (pg.157). Amanda Knox was conviction was overturned in Italy in 2011. Per Price (2016), In March 2013, Italy’s Court of Cassation threw out Knox’s acquittal and ordered a retrial.. Knox was convicted again, and the conviction was overturned. This would have happened in the United States the Fifth Amendment would have protected her from being tried again on the same charge.Which appellate court system do you think is better – Italian or American? Why? Be specific. The American appellate court system is better for several reasons. One reason is that you can not file an appeal just because you were found guilty. The defendant has to have a valid reason on why they want to file an appeal. Another advantage of the United States appellant court is that the judge does not determine if you are guilty or not, they just determine if the defendant had a fair trial and if so, she would have been granted a new trial. Once the conviction was overturned in the United states courts system, she would not have to worry about been tried again. She was protected by the Fifth Amendment. According to the Strasser (2017), The Fifth Amendment of the U.S. Constitution provides, “No person shall be held to answer for a capital, or otherwise infamous crime, unless on a presentment or indictment of a grand jury, except in cases arising in the land or naval forces, or in the militia, when in actual service in time of war or public danger; nor shall any person be subject for the same offense to be twice put in jeopardy of life or limb; nor shall be compelled in any criminal case to be a witness against himself, nor be deprived of life, liberty, or property, without due process of law; nor shall private property be taken for public use, without just compensation.

Amanda Knox grew up and attend school in Seattle Washington She attended. (2019, Aug 20). Retrieved from https://studymoose.com/amanda-knox-grew-up-and-attend-school-in-seattle-washington-she-attended-essay 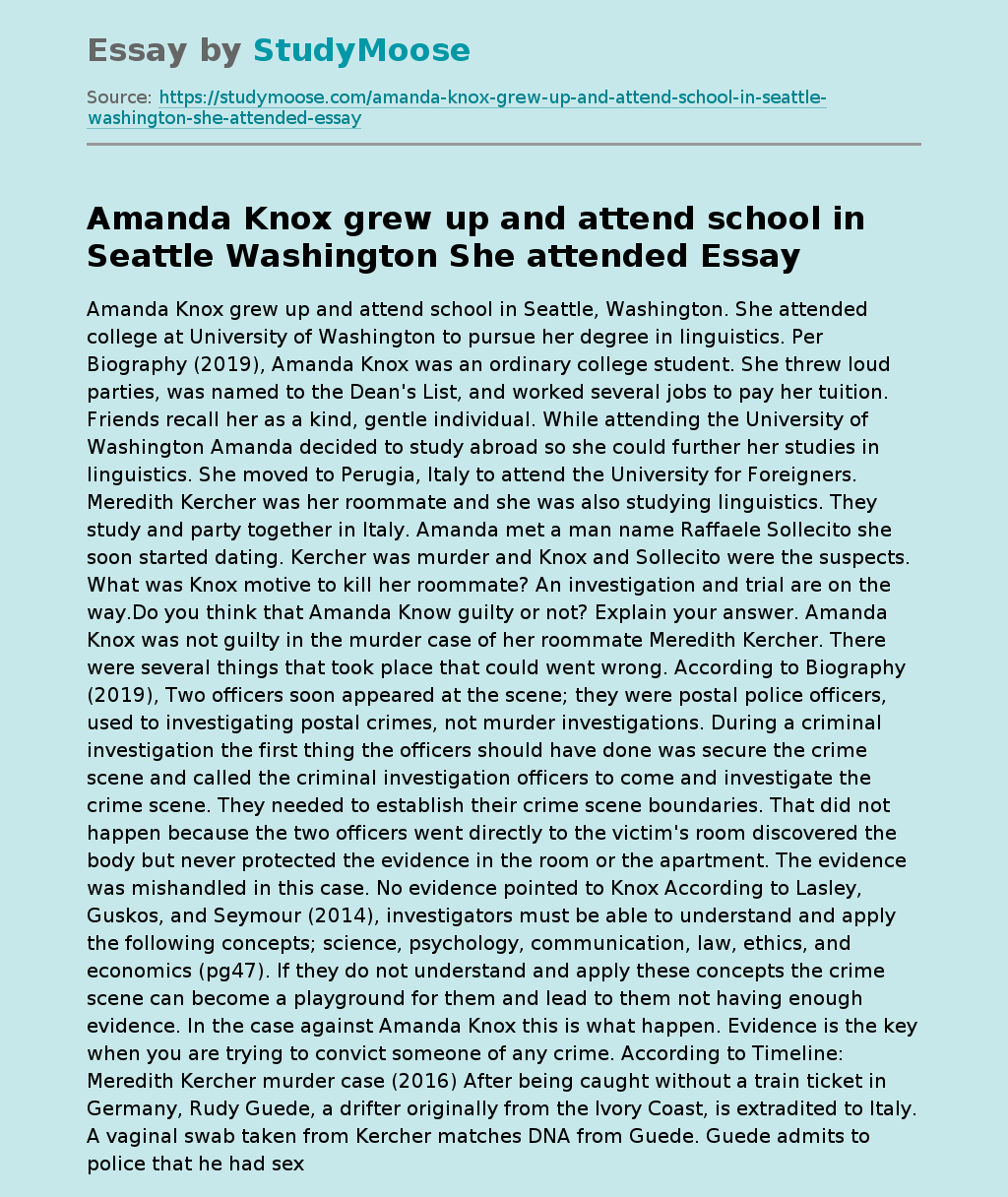