A Wedding I Have Attended

Last year, I went to Taiping to attend my cousin’s wedding. She, unlike most of my family members, is a Christian. So, this was the first time I have been to a Christian wedding. Her wedding was held in the Chinese Methodist Church. The wedding had two receptions in two different places, one in Taiping and another in Kuala Lumpur, Malaysia. This marriage was traditionally done every step of the way. The marriage and betrothals were made a year ago by both bride and bridegroom.

Don't use plagiarized sources. Get your custom essay on
“ A Wedding I Have Attended ”
Get custom paper
NEW! smart matching with writer

During the engagement, the bride and groom exchanged rings as symbol that they have tied a knot together. I could see the look on my cousin’s face that day, something that I cannot describe in words. She was grinning from ear to ear and I could tell she was really happy and also anxious at the same time. The engagement was held at the bride’s in Kuala Lumpur. Although it was just an engagement, it was held grandly because my cousin was the last one to get married in her family.

All of my family members came all the way to Kuala Lumpur to see her get engaged. On the exact same day, the couple announced that their wedding will be held on the month of September. The reason they chose this date is because they believe that the safest season to get married is between the month of harvest and the month of Christmas, when food is plenteous. On the wedding day, the bridegroom was smartly dressed in a tuxedo.

On the other hand, the bride looked stunning wearing a picturesque white gown and her face covered with a veil. Everyone was seated in the church with the groom and his best man, waiting for the bride. After a few minutes of waiting, the bride finally arrived. She was walk down the aisle by her father. This is one of the traditions of a Christian wedding.

This indirectly shows that, when her father gives his daughter away, he is giving his blessing to the couple and acknowledging that her family approves of her choice. As she walked through the hallway of the church were the groom awaits, she was escorted by two flower girls, two pageboys and a few bridesmaids. The flower girls, who were looking very pleasant, threw flower petals on the floor. The pageboys on the other hand, were carrying a ring each. The bridesmaids consists of my cousins close friends were just overlooking the scenario. As soon as the bride was on the stage, where the bridegrooms was, my uncle handed over his daughter to the groom.

Then, both of the bride and bridegroom kneeled down in front of the priest. The priest asked them the usual questions that are always asked in a Christian wedding. After both of them said “I do”, the bride and the groom exchanged rings. The priest pronounced them husband and wife, and his last word to the groom was “you may kiss the bride” indicates to the groom to kiss the bride and indirectly telling them that they are legally together as husband and wife. After that, my newly wedded cousin and her husband walk down the aisle again as husband and wife. Outside, a red Ferrari was waiting for them to take them to a fancy restaurant where the wedding reception is held. Me and all my family members followed their car from behind giving the newlyweds.

A Wedding I Have Attended. (2016, Dec 11). Retrieved from http://studymoose.com/a-wedding-i-have-attended-essay 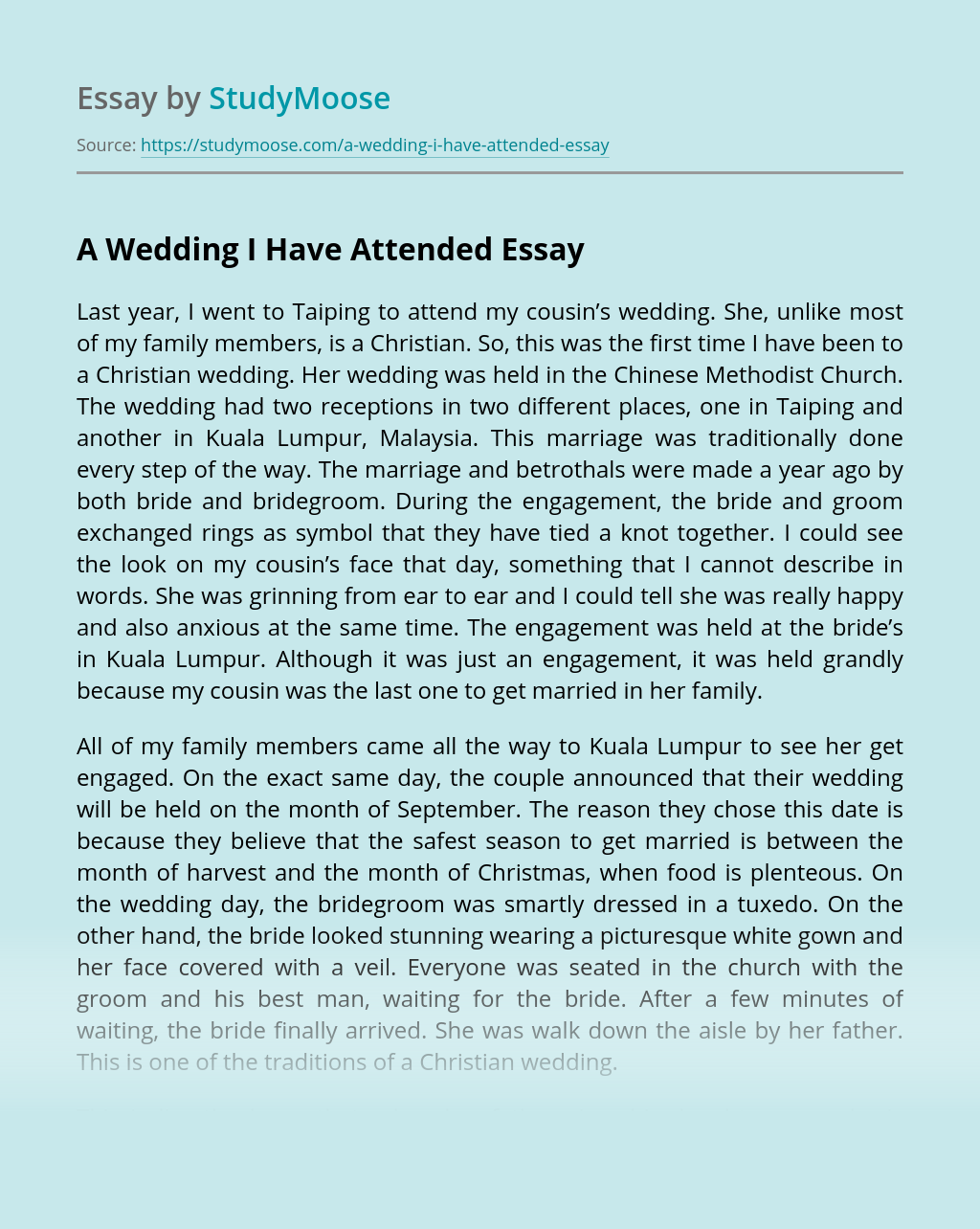