Where Do You See Yourself in 5 Years:?

Probably this is the most challenging question in the near future of my life. But in my opinion finishing University with a degree as good as possible will be the best start you can have. Also I think it is very important to have the best basis you can reach for your future life and what would be better than an outstanding result at University. Furthermore I would probably try to finish graduate classes. Right after this big step there will be several ways possible.

Turn in your highest-quality paper
Get a qualified writer to help you with
“ Where Do You See Yourself in 5 Years:? ”
Get high-quality paper
NEW! AI matching with writer

I haven’t decided yet, what kind of way would be the best to choose? But my time as a student will go on for at least 3-4 years if everything works exactly like I imagined it. So there are many days left to make my final decision. One way could be, that I will try to introduce myself to several companies, such as Boeing, Airbus, Sikorsky, Lockheed Martin or Cassidian. One of my dreams is to become an engineer in the military aircraft sector.

Proficient in: All About Me

This whole part of the aerospace industry includes a lot of challenging topics, of which every single one is totally interesting to me. But in my case I would prefer to become an engineer in developing several new parts in the cockpit, including the HUD (Head-up display) and improvements in controlling the whole Jet (Flight Control System). After all the FCS is probably the most important part of an airplane, because you will not be able to fly a modern Fighter without any sort of electronically support.

Another reasonable way would be getting the chance to become a pilot. It was always a dream of me to join the military and to help protecting our country from whatever there will be. Unfortunately is it not that easy to become a pilot of the German forces and the Luftwaffe (Air Force) is not as big as in the United States. For that reason I have to think about it twice and maybe there is the possibility to join some other forces under special circumstances. It is never easy to reach your goals especially when they are very difficult to reach, but nothing is impossible. Anyhow, there is still another way to go. Becoming a pilot of a commercial airplane is still a great opportunity to get up in the air. Also it is a very well respected job, I mean you have a lot of responsibility towards your passengers. They have to trust their captain a 100 percent, otherwise the flight will end up in total chaos.

For that reason the German Lufthansa will be a good option, they are well known in the world and almost everybody gives a good feedback after flying with them. Another aim of mine is to move over to the United States. I was here for a three-week road trip before coming to Oxford and there have been so many beautiful landscapes as well as big cities with a lot of friendly people. That is the total opposite of Germany. In Germany the normal behavior is to be more introverted and not so open to other people. I really became used to this kind of bearing and I don’t want to miss it anymore. Also I think that a house at the countryside will be nice, but it should not be that far away from a relatively big city. That’s the best solution for me, because I like to have the mix between repose and urban life. California will be a nice place to stay, the climate is pretty warm and I will life right next to the pacific. As I mentioned before I will be 26 in five years and I will also have a well-paid job, so that I can have some hobbies. First, I want to buy a 1967 Ford Mustang Fastback. The condition of the car is not important, I want to have it in my garage to spend as much time as I can to rebuild it. The color of the car will be black with red stripes. Another hobby of mine is to spend as much time as I can with my friends, because they are a very important factor of the normal life. They will help you if you get in trouble and you can spend nice evenings with them. The problem will be that most of them will life across the Atlantic, so it will be hard to see them all the time and to have a lot of contact with them. For that reason I want to travel to Germany at least once a year to visit my family and to spend some time with my best friends. The next big point will be to stay healthy. I like to do sports, such as soccer, jogging or a nice little workout in the gym. This is for me as important as eating wholesome food. So I have to try to get everything done even if I am busy with my job. The last thing that I want to reach during the next 5 years is probably one of the most important ones. I want to have a girlfriend, but not just anyone. I would like to meet the one sometime, I know everybody is saying that the special one girl is just an illusion but in my case I think she is somewhere out there. It is pleasant to spend your time and all you reach in your life with somebody that can really be trusted. On the other hand I think getting married and having children will be to early to happen during the next 5 years. I want to reach my goals in daily life, such as getting a good job and creating a basis for life first. 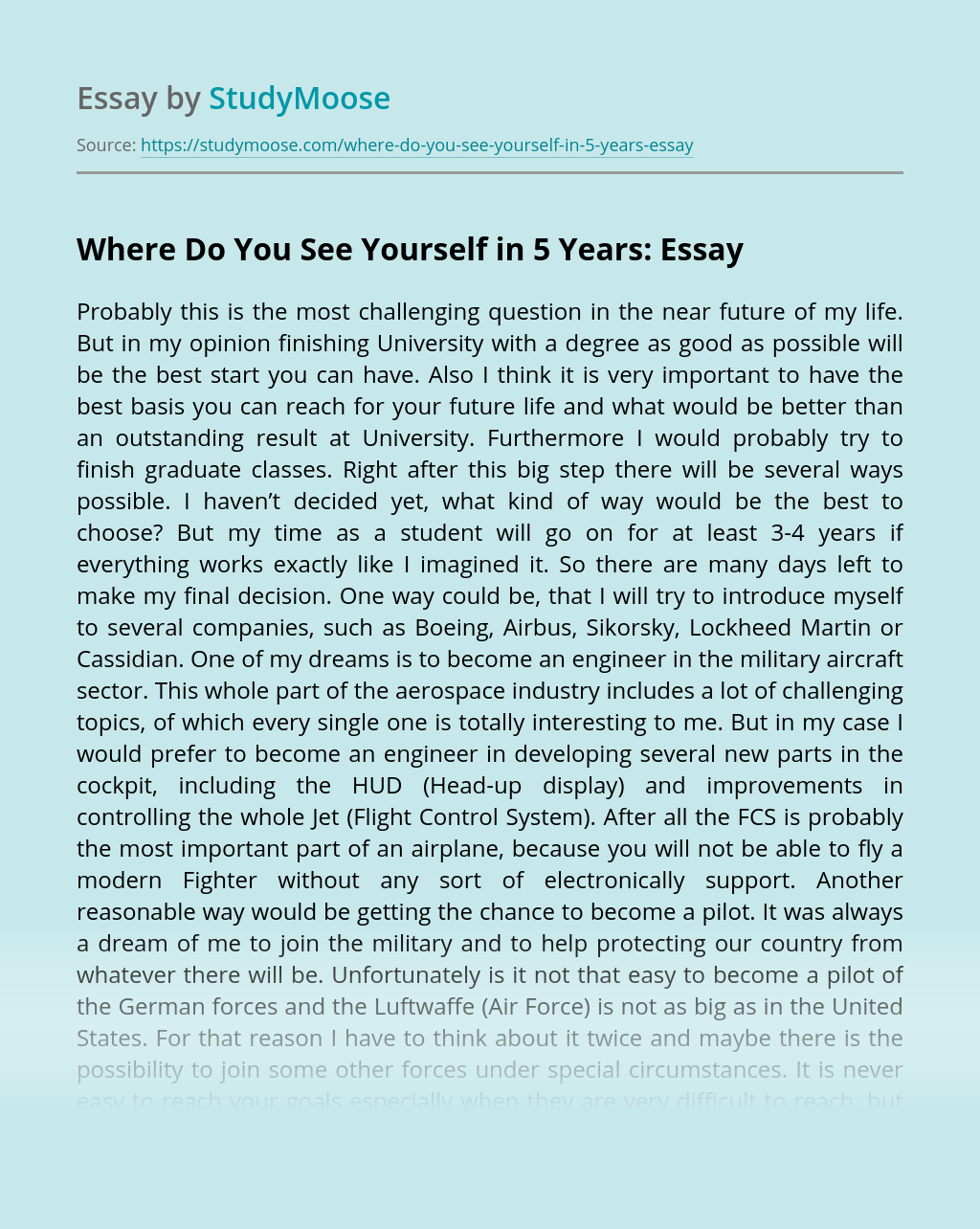 Turn in your highest-quality paper
Get a qualified writer to help you with
“ Where Do You See Yourself in 5 Years:? ”
Get high-quality paper
Helping students since 2015
Stay Safe, Stay Original