What Was the Significance of D-Day to the Outcome of World War 2?

What was the significance of D-Day to the outcome of World War 2? D-Day happened on 6th June 1944 after five years of war with Germany. D-Day was an invasion towards Germany by a massive military force that set out from England towards France. It was going to take over Nazi Germany and Germany’s leader Adolf Hitler because the Nazi’s had nearly taken over the whole of Europe which wouldn’t have happened if appeasement didn’t occur. The allied forces landed on the beaches of Normandy and started to break through the German army’s defences.

Don't use plagiarized sources. Get your custom essay on
“ What Was the Significance of D-Day to the Outcome of World War 2? ”
Get custom paper
NEW! smart matching with writer

They began an attack that lasted for eleven months which took them all the way to the German capital Berlin, to the bunker that was Adolf Hitler’s headquarters. In April 1943 the British General Fredrick Morgan was selected the chief of staff to the supreme allied commander (CASSAC) for the D-Day invasion. He was to draw up blueprints of the attack, Morgan finalized the planning in July 1943 and he had considered both the Pas de Calais and Caen as possible landings areas but although Pas de Calais was closer to southern England it was also heavily defended which is why he opted for Caen as the landing place.

Surprise was crucial, not just to allow the troops to get ashore but also to prevent the Germans from sending significant reinforcements quickly from elsewhere. Britain wanted to trick the Germans into believing that the landings would be in Pas de Calais because the Germans also feared an allied invasion of Norway so they retained a large number of troops there.

The Germans had their troops spread out around the coastline which meant a good chance of Britain reaching Hitler’s headquarters.

Morgan’s plans were approved at a conference in Quebec one 17th August 1943 but it wasn’t until the start of December 1934 that Eisenhower (President of the United Sates from 1953 until 1961) was made supreme allied commander in Europe for the invasion which was codenamed “Operation Overload”, two weeks later the attack began. The invasion began when allied planes and warships bombarded German positions along the coastline, this was to damage the defences making it easier for the troops to get ashore.

At the same time planes and gliders dropped tens of thousands of allied soldiers behind the German defences, so they could take control of important roads and bridges to make it harder for the German army to rush extra men towards the areas where the troops were landing. Masses of ships set out from the South coast of England, in total over 6,000 vessels joined the attack and were supported by over 11,000 planes. The naval force crossed the channel overnight, at 6:30 am on June 6 troops started to land on the beaches of Normandy and by the end of D-Day the allies had put 156,000 troops ashore in Normandy.

The troops landed on beaches along an 80km stretch of Normandy coastline in the North of France it’s not the closest part of France to the UK but it was chosen because Hitler was expecting the invasion force to cross the English Channel at its narrowest point. However by making a longer sea voyage they avoided some of the heaviest coastal defences. There were five main landing beaches: Juno, Gold, Omaha, Sword and Utah. The heaviest fighting was on Omaha beach; overall the soldiers suffered about 10,000 casualties (dead or wounded) on D-Day itself.

The allied troops were mainly made up of forces from United Kingdom, Canada and the U. S but there were other countries that helped with the Battle of Normandy including France, Australia, Norway and Poland. The allies landed around 156,000 troops in Normandy. The American forces landed 73,000 troops in Normandy, 23,250 troops on Utah Beach, 34,250 on Omaha Beach and 15,500 airborne troops. In the British and Canadian region 83,115 troops landed of which 61,715 were British; 24,970 on Gold Beach, 21,400 on Juno Beach, 28,845 Sword Beach and 7900 airborne troops.

In the airborne landings on both sides of the beaches 2395 aircraft and 867 gliders of the RAF and USAAF were used on D-day. Operation Neptune involved huge naval forces including 6939 vessels, 1213 naval combat ships, 4126 landing ships and landing craft, 736 ancillary craft and 864 merchant vessels. 195,700 personnel were assigned to Operation Neptune: 52,889 US, 112,824 British and 4988 from the other allied countries. The US lost more troops than any other allies but they had more troops to start with. 3184 were wounded, 1928 missing and 26 captured.

However each country lost a lot of troops that day but US suffered a greater loss than any other, which is one reason why the US wanted to join in World War 2 but when the Japanese bombed Pearl Harbour they realised they had to join. This is one of the outcomes to World War 2. There are many impacts that were caused by D-day and they were social, political and technological impacts. The social impacts were the Americans freeing the French and after the French were free, Paris then became liberated. Another social impact is that Hitler absolutely hated the Jews and Christians because the Jews wrote the bible.

The allied forces later freed the Jews when they started to encounter and release camp prisoners. The political impacts were; when the allied forces released the French government. Also a political impact was when the Germans were forced to retreat because of the U. S. troops crossing the Rhine on the western front. Another impact happened on January 16th 1945 when the battle of the bulge ended with a defeat ad retreat from Germany as their supplies grew short and its forces were overcome by allied forces. There were also technological problems with D-Day. Which were; during the war everything was paid for.

The allied forces began developing new weapons and thanks, Like the M3 Stuart, the M4 Sherman and the M7 priest tank and various other weapons such as pistols and ships. This meant that the new weapons would be able to continue fighting in the wars to come and other countries would have less advantage than others. Germany started World War 2 by invading on September 1st 1939 and then on May 10th 1940 began attacking on Western Europe but started by invading the Low countries, the Low counties consist of; the Netherlands, Belgium and Luxembourg. D-Day was a major turning point in World War 2.

What Was the Significance of D-Day to the Outcome of World War 2?. (2016, Sep 08). Retrieved from https://studymoose.com/what-was-the-significance-of-d-day-to-the-outcome-of-world-war-2-essay 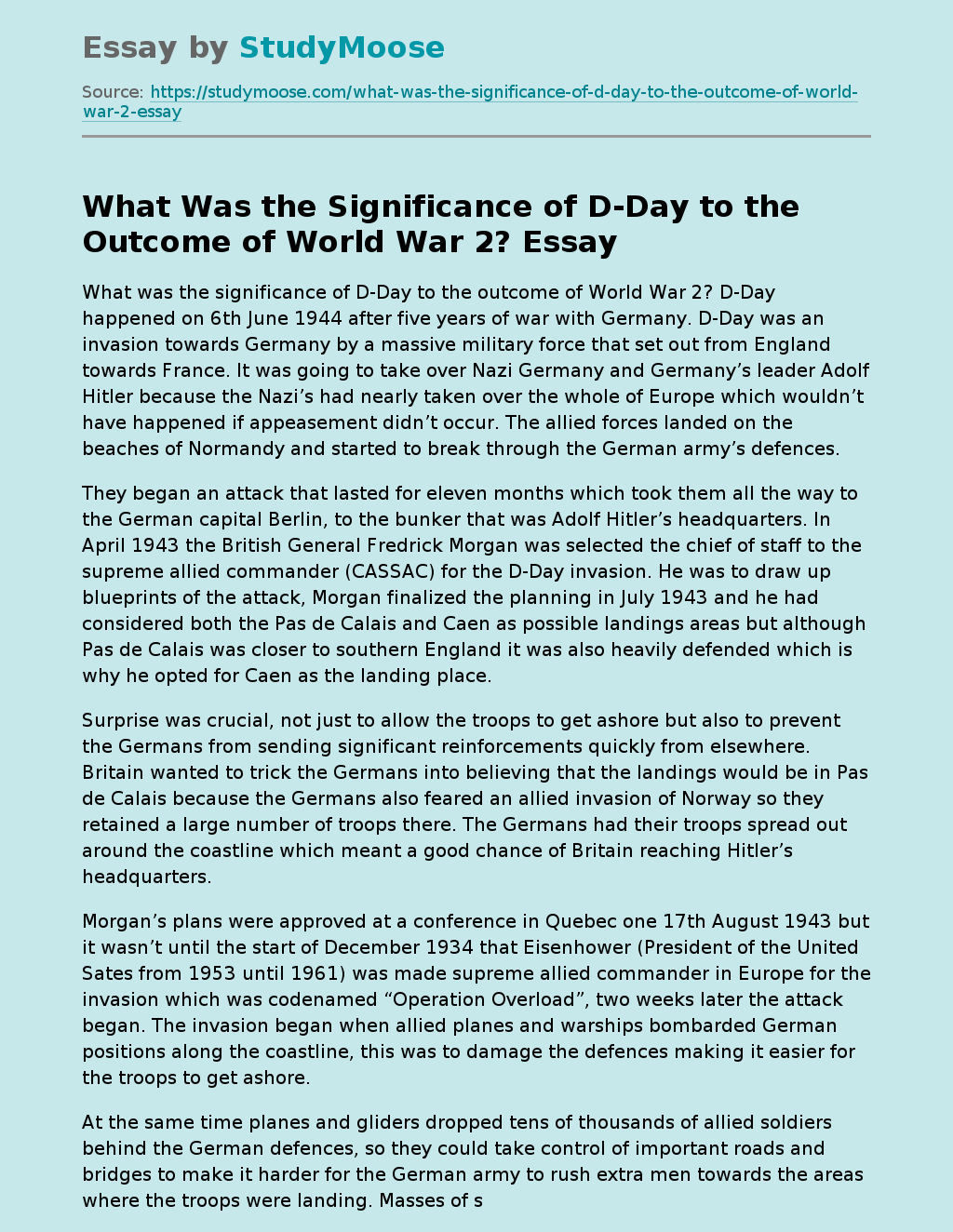