What is the importance of Simon in Lord of the Flies?

* the importance of the part Simon plays in the plot

* how Simon is different from the other boys

* the ways the writer user Simon to convey his ideas

Simon appears only in very few occasions, when compared with other main characters such as Ralph, Piggy and Jack. All those incidents are very significant to the plot. In the first chapter, Simon is introduced as a boy who is weak and “is always throwing a faint.

Don't use plagiarized sources.
Get Your Custom Essay on What is the importance of Simon in Lord of the Flies? Just from $13,9/Page

” As the chapter progresses Golding moves on to describe Simon by his physical appearance- “a skinny, vivid boy, with a glance coming up from under a hut of straight hair that hung down, black and coarse.” Simon plays a very important role when Jack is introduced. Jack’s harshness and choir’s attitudes towards Jack are well revealed at this point- “Wearily obedient, the choir huddled into line and stood there swaying in the sun…Then one of the boys flopped on his face in the sand…”

Simon is presented as the peacemaker.

When Jack passes remarks on Piggy, (saying that he didn’t do anything), Simon resolves the conflict saying “We used his specs, he helped that way.” This shows that Simon tries to hold things together. He is the person who keeps all the boys together and happy. This is also well depicted in chapter 4 when “Simon sitting between the twins and Piggy, wiped his mouth and shoved his piece of meat to Piggy” as Jack didn’t offer any meat to Piggy.

“Simon is always about” helping everyone. He helps Ralph to build the huts which is a very important in terms of civilisation. Here Simon contributes to the plot while standing out as a person who is willing to take physical labour.

Simon’s vision is very important as it’s foreshadowing what’s going to happen on the island. In chapter 4, when everyone is disturbed by the thought of the beast, Simon says “What I mean is…may be it’s only us.” This is the essence of this book. He is trying to say that it is the evil within the human heart which causes all this devastation. Not only his vision, his actions also foreshadows what’s going to happen. In chapter 6, Phil mistakes Simon (who walked through the jungle to his secret place) as the beast. Ralph warns him, “Well don’t do it again! Understand? Not at night. There’s enough silly talks about the beast, without the littluns seeing you gliding like a-” This is exactly what happens at the very end, all the boys kill Simon thinking that he is the beast.

Golding also uses Simon as a vehicle to take the readers to the island. He is the only person who realises that all the boys have been mistaking the dead parachutist for the beast. Thereby he solves the mystery of the beast- “The beast was harmless and horrible…Even with great care the beast he could do was stagger” His mental conversation with the Lord of the Flies, “You knew didn’t you? I’m part of you?” further illustrates the essence of the book which is very important.

The death of Simon, which I consider as the climax of the story is very important to the plot as it’s the first murder committed by the boys. This virtually leaves Ralph and Piggy alone (well depicted in chapter 10 when Ralph says “Piggy? Are you the only one left?”) while giving the other boys the freedom to turn themselves into complete savages and kill Piggy and Ralph as well if the fate allowed them to do so. Therefore I believe that Simon is very important to the plot.

Simon is a very different character. Golding says in chapter 1 “Simon had to do a double shuffle to catch up with the others.” This alone is a good evidence to suggest that he’s different from the others.

Throughout the novel Simon goes to a secret/hiding place where “he knelt down and the arrow of sun fell on him.” This might mean that he is praying and therefore suggests that he is religiously sensitive. Very significantly there is no reference in this novel to any other boy being religious or praying. Very often Christ analogy is associated with Simon. He “found for them the fruits that they could not reach…and passed back down to the endless outstretched hands” which is very similar to Jesus feeding the five thousand people. When Jack smacked Piggy’s head, his glasses flew off. Then “Simon got there first, found them for him…” This is very similar to Jesus curing the blind.

Simon is also very perceptive. This is well depicted by Simon’s thoughts during the second exploration of the island (in search of the beast)- “…a beast with claws that scratched, that sat on a mountain-top left no tracks and yet was not fast enough to catch Samneric?” He understands what others can’t.

He is also very brave. I don’t think I would be wrong if I say that Simon is spiritually the strongest person in the island although he is not physically the strongest (he faints all the time.) In chapter 7, he volunteers to go back and tell Piggy that they will be late- “I’ll go, if you like, I don’t mind, honestly.”

Simon is also prophetic. He tells Ralph 3 times that he would go home safely. The third time he says is very significant as Golding describes Simon shook his head violently till the coarse black hair flew backwards and forwards across his face. “No I’m not. I just think you’ll get back home alright-” This is the only place in the whole novel where Simon is associated with violence. This might have meant, whether I get back alright or not you would.

Simon is very different among everyone on the island when it comes to the awareness that the beast is created by people. “However Simon thought of the beast, there rose before his inward sight the picture of a human at once heroic and sick. ” This suggests that he understood that people have the potential to do good things, but they have an evil side within them.

Simon represents the truth of the real world. I think the island was a mini-version of the real world outside (The dead parachutist drifted down from the sky on to the island as result of the military airplanes battle). People have conflicts, they bully, attack or even go to the extent of killing. For civilisation to disappear there shouldn’t be any need to become savages physically. People could still wear posh clothes, talk in the same way and be savages mentally and behave like them.

Evil is within every human (well illustrated in the conversation that Simon has with the Lord of the Flies “You’re not wanted… We are going to have fun on this island! So don’t try it on, my poor misguided boy, or else…or else we shall do you. See? Jack and Roger and Maurice and Robert and Bill and Piggy and Ralph. Do you. See? “) And also people do have good qualities in them. The level of controlling one’s evil side depends on each and every individual. This is the fundamental truth of this novel and it’s revealed to the readers through Simon.

Golding uses Simon in so many ways to convey his message as previously described. His thoughts, words and actions all are used by Golding intentionally to convey his message to the readers. Very significantly Simon faints after he has some spiritual experience, for example, after the conversation with the Lord of the Flies “he fell down and lost his consciousness.” This illustrates that even Simon comes to a point where he can’t handle the stress any longer where he faints despite his deep understanding of the real world. The truth is bitter and it’s hard to accept- the very reason why others call Simon “batty.”

What is the importance of Simon in Lord of the Flies?. (2017, Sep 19). Retrieved from https://studymoose.com/what-is-the-importance-of-simon-in-lord-of-the-flies-essay 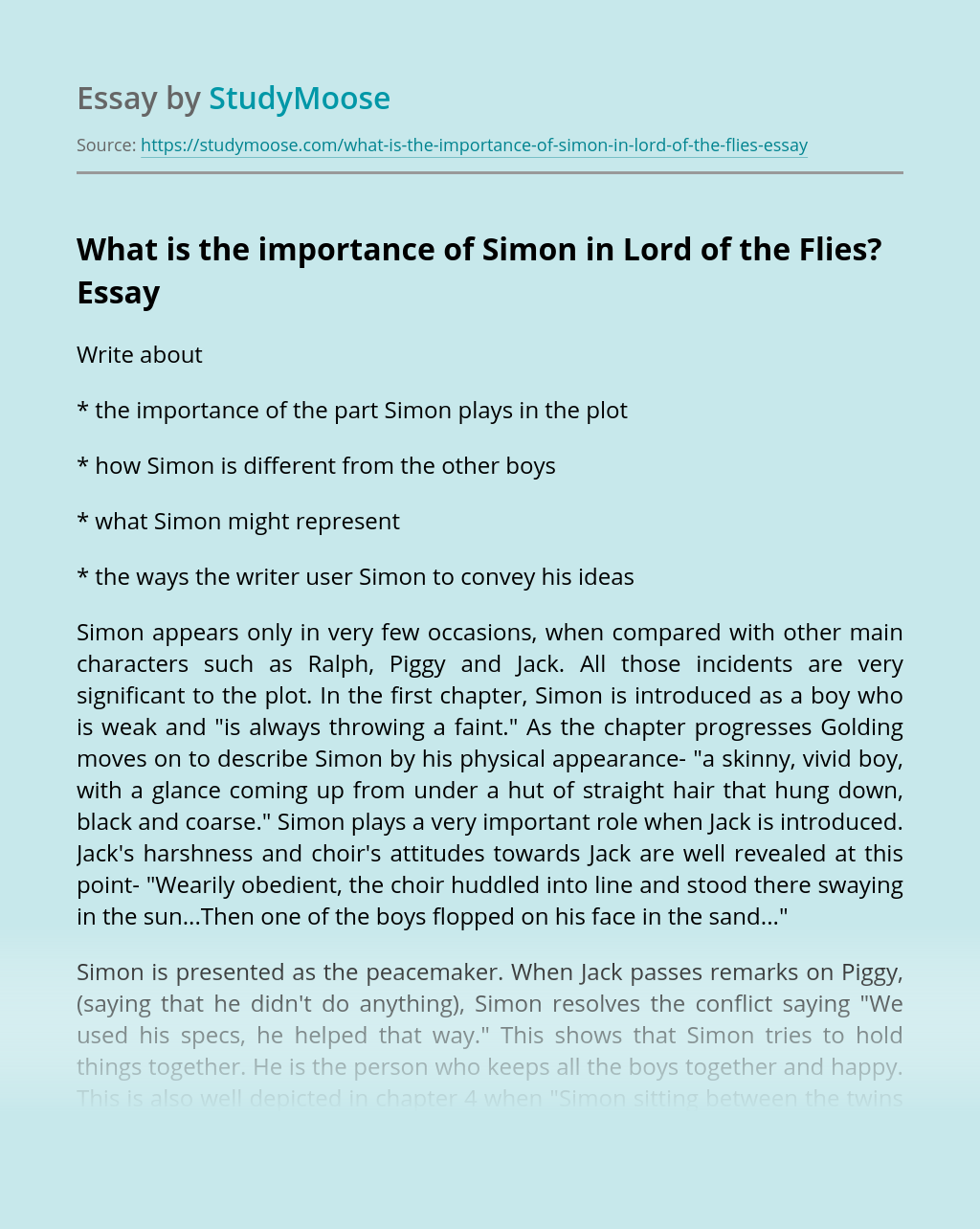 Literary Devices in Sinners in the Hands of an Angry God

In Hell we imagine it to be torturous, horrid, and filled with pain and suffering. In the story, Sinners in the Hands of an Angry God, it thoroughly explains what Hell would be like. Literary devices are used to emphasize how horrific Hell would be for sinners, and it scares you into being a Christian....

Q: Explore the theme of racism in the novel. Don't use plagiarized sources. Get Your Custom Essay on What is the importance of Simon in Lord of the Flies? Just from $13,9/Page Get custom paper A: To Sir With Love, is a testimony, written by E.R Braithwaite. A book which centers on a teacher, who...

1. Abstract Language: Language describing ideas and qualities rather than observable or specific things, people, or places. 2. Alliteration: The repetition of initial consonant sounds, such as “Peter Piper picked a peck of pickled peppers. ” 3. Allusion: A reference contained in a work 4. Ambiguity: an event or situation that may be interpreted in...

View sample
The road to Mecca

The statement “There is nothing sacred about a marriage that abuses the woman!” refers to social problems that harass women who are frequently the victims of violence and abuse. Elsa’s view of marriage is that it is a “human rights” approach to the problem of domestic affairs. These problems are more common in poor communities...

Plot How are the events presented in the story? How is the plot developed? Does the author use a linear (chronological) pattern? Is flashback one of the techniques used? Do any of the early events or incidents prepare the reader for later ones? Do any events or incidents lead you to anticipate the outcome? What...