What is Manifest Destiny?

Don't use plagiarized sources. Get your custom essay on
“ What is Manifest Destiny? ”
Get custom paper
NEW! smart matching with writer

A basic knowledge of what was happening back then will be needed in order to understand the essay provided. One of which is to already know who the Cherokee Indians were. Cherokee Indians where the people who lived in southend end of the American soil. The Cherokee lived freely in Georgia before Manifest Destiny and the Indian Removal Act. Another thing that requires basic understanding is the Mexican-American War.

And, even though the events may have affected the United States in positive ways, other places were affected negatively. Not just states or countries, but tribes and villages too. Because of the idea called Manifest Destiny, groups like the Cherokee Indians and Mexicans were affected in a number of ways. Most, although claimed to be great, were absolutely awful and now would be called inhumane.

For one thing, the Cherokee Indians, one of the many tribes affected by the Indian Removal Act, who were forced out of Georgia due to Manifest Destiny’s idea. The Indian Removal Act was an act that was supposed to help the Cherokee leave Georgia peacefully if the tribes similar to and like Cherokee wanted to leave, and if some decided to leave, land and the proper needs to survive in a new, undiscovered land would be provided to the Indians. This land given to the Cherokee was west of the Appalachian Mountains. Though the removal was planned to be non-violent and amicable, Indians rebelled and had to be forced out of the homelands given to these Indians by relatives from years back. The Cherokee, who was one of the tribes who most didn’t want to leave the lands, took Georgia to the Supreme Court because of a law passed that said that white people couldn’t live on the Indian’s land in Georgia without a license. This law was supposed to force white mercenaries not to help American Indians revolt against the Indian Removal Act and then the Indians would be able to live in peace on the old land. The court deemed the act that Georgia was doing, allowing people to move on to the Indian’s land, was unconstitutional. Although the court said the actions were not okay to do, Georgia refused to listen, and President Andrew Jackson didn’t reinforce the law. (pbs.org) The freedom and rights that the Cherokee Indians had to live wherever the people of the tribe saw fit, was ripped off them and disobeying the American rules was not an option. So, as a result of Manifest Destiny, the Indian Removal Act forced tribes like the Cherokee Indians to leave where the tribes had always lived and refused to listen to Indian rights and beliefs.

For another thing, the Trail Of Tears, a journey to move thousands of Native American Indians to modern-day Oklahoma, was a cruel way to transport people and a selfish thing to do as part of Manifest Destiny. Many were forced to travel and so many people died. “In 1835, a few self-appointed representatives of the Cherokee nation negotiated the Treaty of New Echota, which traded all Cherokee land east of the Mississippi for $5 million, relocation assistance and compensation for lost property.” (History.com) The previous idea stated in this quote by History.com angered many of the Cherokee. Some of the Indians even decided to make a petition which got 16,000 signatures, but the treaty passed anyways. Some of the Native American Indians, including some of the Cherokee, moved to the lands west of the Appalachian peacefully and some even supported the idea of the Act, but because of the resistance, the Trail of Tears became a way for American soldiers to move the Cherokee and other tribes. For the Cherokee that didn’t move, soldiers raided homes and stole belongings while holding Indians in place with weapons. The soldiers then proceeded to move Indians to the Indian territory promised to those who moved. “This spread diseases like cholera, dysentery, typhus, and whooping cough around, historians believe that more than 5,000 Cherokee died as a consequence of the journey to leave their homeland in Georgia.” (History.com) These are just some of the examples of the illnesses caused by the trail. This also proves that many of the Indians died because of a trip American soldiers and the people of Georgia forced the Indians to take and to move away from the Cherokee and other tribe’s rightful lands with no say or idea in the matter. So, this proves that the Trail of Tears was a cruel way that Manifest Destiny had affected the Cherokee Indians and other tribes.

In addition to the previous reasons, the Mexican-Americam War was said to be good, but was wrongly mislabeled. All the lives lost over whether Texas could be part of the United States, or if the land had to stay separate from the States. When Texas became independent from Spain in 1836, Texas was denied the right to join the United States when the area of land requested to be part of the country. The reason is believed to be because the northern states didn’t want a new slave state in the country. The Mexicans also encouraged border raids as a warning to tell the United States that any sort of association would mean going to war with Mexico. When James K. Polk became president in 1844, and decided to accept Texas into the United States. He wanted to obtain the now southwest, this meant mainly mooder-day California, New Mexico, and the rest of the US southwest. Polk’s offer to purchase those lands were rejected so he provoked a fight by bringing troops to a state that everyone recognized as a Mexican state, Coahuila. “On April 25, 1846, Mexican cavalry attacked a group of U.S. soldiers in the disputed zone under the command of General Zachary Taylor, killing about a dozen. They then laid siege to an American fort along the Rio Grande.

Taylor called in reinforcements, and–with the help of superior rifles and artillery–was able to defeat the Mexicans at the battles of Palo Alto and Resaca de la Palma.” (History.com) This quoted paragraph above shows how the Mexicans responded. With the help of reinforcements, the Americans were able to win the battle, but not without casualties. About 13,000 Americans died and 25,000 Mexicans died. That’s a lot of people dead! So as much as the Mexican-American war may have helped America and Manifest Destiny (The belief that the Americans had a divine power to achieve the land desired), the action hurt the new country too.

Given these points, Manifest Destiny, the idea that people could expand across the whole modern-day US, affected all types of people in all parts of the continent in negative ways that most people now would never even think about doing. People thought about and debated about forcing people out of the place these people have lived in for thousands of years! Also debating whether to kill so many people for the sake of land and money! Creating war over an independent country’s choice of whether to stay away or join a larger country too! Because of Manifest Destiny, the Indian Removal Act prevented Cherokee from staying in the land their ancestors founded because if a law passed by the Americans. This was unfair to those who were living in that land first and needed the land to live comfortably in the land founded by their ancestors.

The Trail of Tears was an unfair, and cruel way to force people, like the Cherokee, out of their homeland, to travel 1,200 miles away while risking catching diseases and illnesses that so many of the people on the journey died from, against their will. The Mexican-Amerian war was mislabeled as ‘good for the country’ but there were so many things wrong with the war. All things considered, whether Manifest Destiny was good or bad, the United States earned a lot more land and riches. But people now know, the United States weren’t the only ones affected, and the United States had been affected in the best ways possible, considering the other effects on so many other places.

What is Manifest Destiny?. (2020, Sep 10). Retrieved from http://studymoose.com/what-is-manifest-destiny-essay 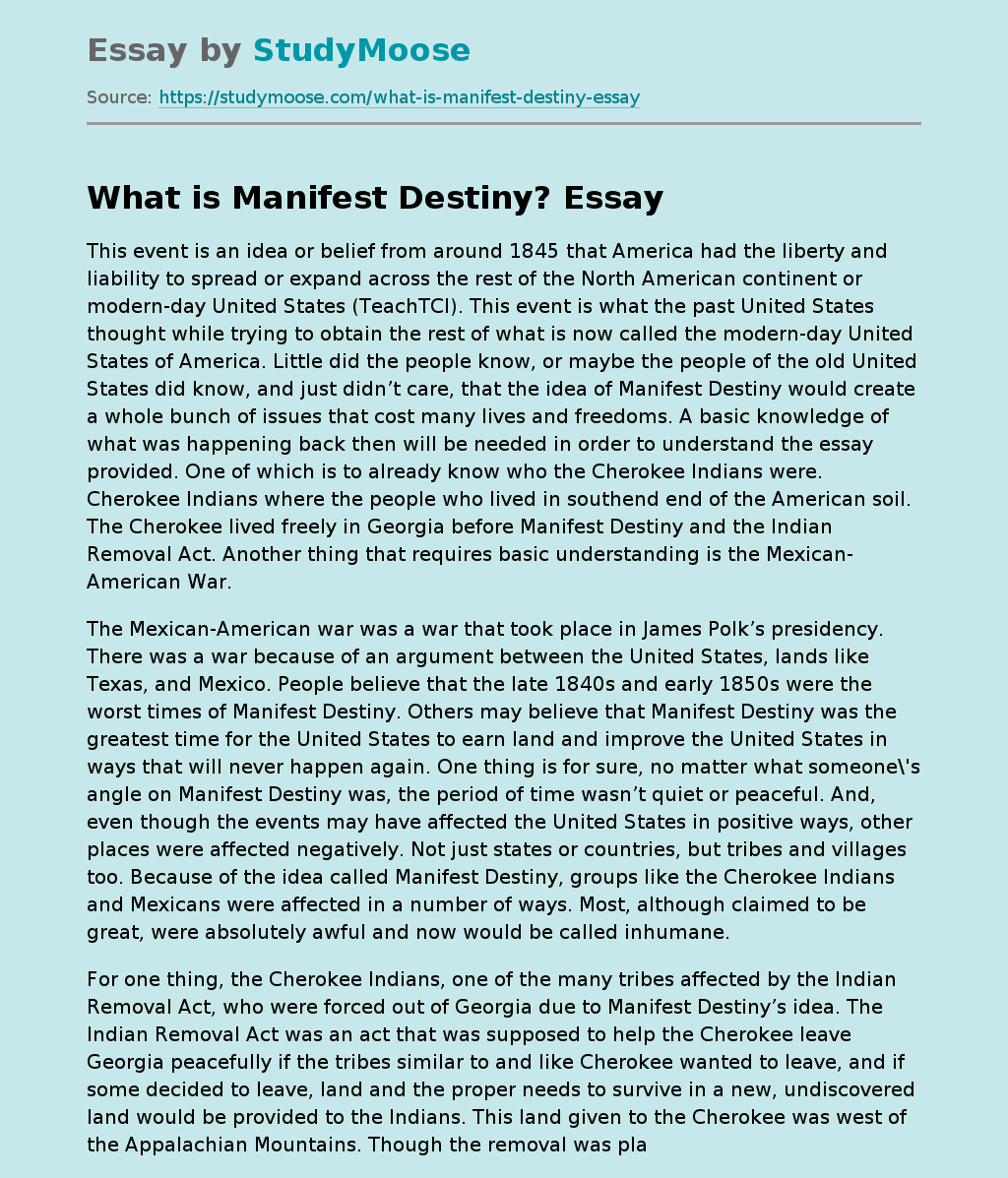