Manifest Destiny in the United States

In 1803, the Louisiana Purchase nearly doubled the size of the country. As Americans began to conquer this “unclaimed” land, they pushed the Natives that had been living there further west. The Southerners desired new land suitable to grow cotton, which would spread slavery across the new territory. Despite the possible economic gain for the country, many in the North fought against the expansion of the country. John Gast’s painting entitled American Progress “Spirit of the Frontier” justifies Manifest Destiny in the United States in order to gain wider acceptance in the North.

Don't use plagiarized sources. Get your custom essay on
“ Manifest Destiny in the United States ”
Get custom paper
NEW! smart matching with writer

As “destiny” moves across the painting, she brings with her American ideals. By doing this, she enlightens those that choose to live on the new territory with Christianity and American ideals. This is represented by the light and dark portions of the painting, as well as the book she carries. The Native Americans are shrouded in darkness as they run from new traditions, and a new religion. The portions of the painting bathed in sunlight represent the land now conquered by Americans, making those living on the land enlightened.

The book represents education, both religious education and scholarly education. As education expands, American ideals spread across the land, and so does Christianity. The spread of democracy and American ideals were a key factor in the decision to move west. Lady Liberty brings Christianity industrialization, and democracy, which would greatly improve the lives of those living in the new territory.

American inventions also are pushing the frontier, making life better for many.

In the background, the pony express can be seen, yet the women in white carries Telegraph wires. The railroad is also in the background. Farmers in the foreground are taming the west and are growing crops, something very important to people. Not only are there farmers, there are also structures being built. There is a cabin and a fence, which although small and seemingly insignificant, symbolize the pushing of society further and further west. The background has steamboats and bridges on the river which shows the future of the rivers of the west.

Mountains are in the background, and are still shrouded in darkness. This shows the possibilities that are open to America if they keep expanding. Not only would this open up many new economic opportunities, but it would expand democracy. This was something very important to citizens of the new country. Native Americans are also cloaked in darkness, showing their unwillingness to join society. Joining society would mean adopting Christianity, something many natives were not ready to accept. This is portrayed by them fleeing westward into the depleting darkness. The many animals on the frontier seem to be following the Native Americans. Animals like bison are in darkness, clearly fearing the people on this land and leaving behind their carcasses.

John Gast’s painting American Progress “Spirit of the Frontier” was instrumental in gaining support for the expansion of the country. It portrays the past, present and future of the United States and highlights the new possibilities now open to the United States. The possibility of expanding democracy from sea to sea pushed America westward, even though the threat of expanding slavery loomed. This oil painting was instrumental in changing the minds of those still believing the expansion of the country was dangerous to freedom, and that it was a slippery slope to becoming to powerful. Much like Great Britain, which they had revolted against in the Revolutionary War, the fallout of which created the new nation they inhabited.

Manifest Destiny in the United States. (2021, Apr 09). Retrieved from https://studymoose.com/manifest-destiny-in-the-united-states-essay 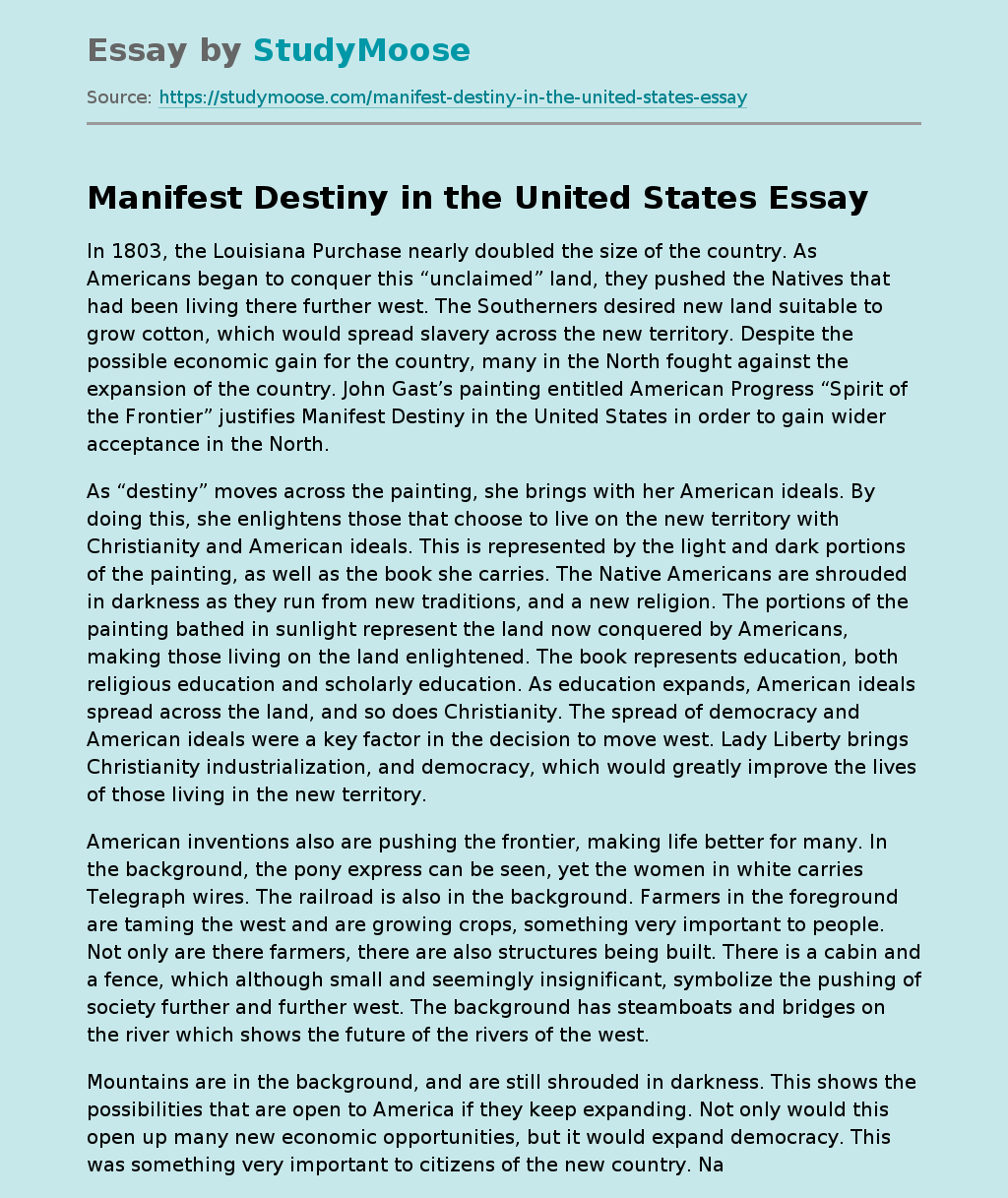