“Character is destiny” is a dominant theme that often appears in Shakespearean tragedy. In the play, King Lear this concept is portrayed through the characters of King Lear, Gloucester, and Edmund. The characteristics and the roles that each of the characters have within the society of the play determine the treatment that they receive from other characters as well as their destiny. In the play, Lear demonstrates various characteristics that can be classified as his tragic flaws. In the opening scene, Lear’s irrational basis for distributing the kingdom between his daughters reveals that he is accustomed to hypocrisy, that he is quick tempered, that he is impatient, and that he is unaware of human limitation.

Don't use plagiarized sources. Get your custom essay on
“ Character is destiny ”
Get custom paper
NEW! smart matching with writer

By asking his daughters to publicly display their love towards him, he reveals that he is accustomed to flattery.

This also demonstrates that he is proud of his ability to exercise his will quickly and effectively. A.C Bradely comments on this tragic flaw by stating that “A long life of absolute power, in which he as been flattered to the top of his bent, has produced in him that blindness to human limitation and that presumptuous self will” .

In the opening act, King Lear also demonstrates his quick tempered nature through the disowning of Cordelia and the banishment of Kent. When Lear does not hear what he expected from Cordelia, he disowns her as his daughter without any rational thoughts.

In addition, when Lear hears what he expects from Goneril and Regan, he rewards them with a large portion of his kingdom. This reveals his gullible, generous, and unsuspicious nature. Overall, Lear’s characteristics are revealed in the first Act of the play.

He is accustomed to exercising his will freely, he is gullible, unsuspicious, and is blind of human limitations. These characteristics are his tragic flaws that later lead to his destiny. Lear’s destiny at the end of the play is predetermined because of his tragic flaws. He disowned Cordelia because he believed that his position as a monarch enables him to dictate love. By disowning Cordelia, he loses his protection against the evil deeds of Goneril and Regan. In addition, Lear’s gullible, generous, and unsuspicious nature towards Goneril and Regan lead to the division of his kingdom between the two ungrateful sisters. Because of Lear’s characteristics, he is unable to see in advance the possible outcomes of his actions. His gullible and unsuspicious nature does not permit him to see beyond the misleading surface of Goneril and Regan’s proclamations. As the play progresses, Goneril and Regan are able to use Lear’s characteristics against him to advance their own powers and to 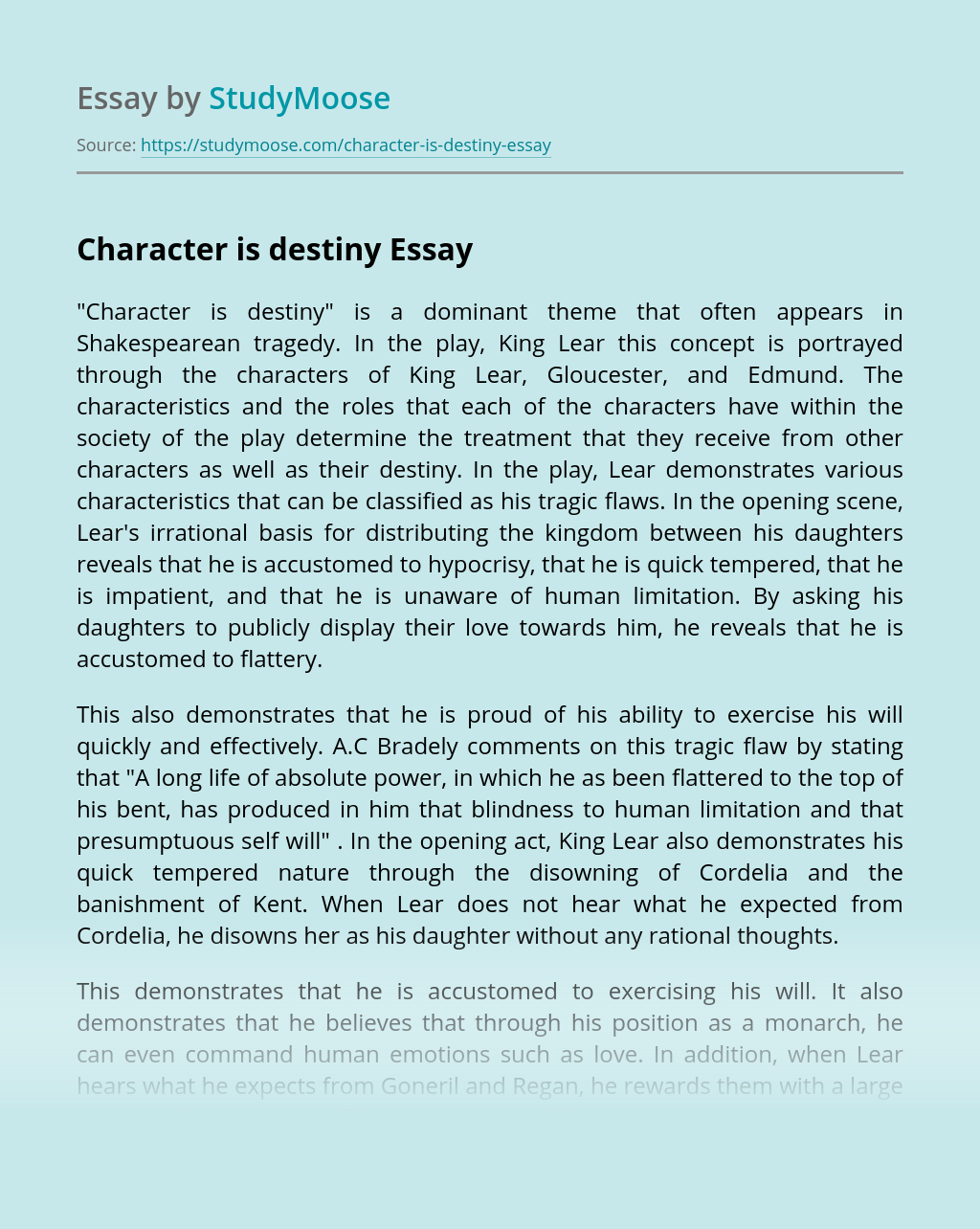