Manifest Destiny: Was It Really Imperialism?

Imperialism is, by definition, the extension of rule or influence by one government, nation or society over another; manifest destiny is the belief held by many Americans in the 1840s that the United States was “destined” to expand across the continent. This belief of “destined expansion” was nothing new to America’s leaders for their vision of the United States when they first established it was that of a nation that stretched from the Atlantic to the Pacific. The American people themselves had underlying reasons for their imperialistic actions as well, mostly economic and political.

Don't use plagiarized sources. Get your custom essay on
“ Manifest Destiny: Was It Really Imperialism? ”
Get custom paper
NEW! smart matching with writer

During the conquest of manifest destiny the US acquired Texas, Oregon and California. Americans tooled over the West like an aggressive imperialistic empire reaching over unclaimed lands full of Native Americans and Mexicans in order to accomplish their political and economic destiny.

Stimulated by the American Revolution, Americans felt the need to expand its territories. In February of 1821, Congress ratified the Transcontinental Treaty, which completely excluded Texas from American territory.

American’s feelings towards Texas quickly changed when they realized that cotton flourished on the Texas plains. The South quickly took interest in the land. Mexican authorities even offered free land to groups of settlers following the treaty and by 1830 there were 20,000 white Americans and 2,000 slaves living in Texas. In 1836 Texas declared their independence from Mexico and ten years later was annexed into the US.

The annexation of Texas had been a controversy for years because of the slavery issue. Slavery was another issue that further fueled expansionism, as the North and South each wanted the nation to admit new states that supported its section’s economic, political, and slave policies.

The United States had no reason to annex Texas other than the fact that they wanted the fertile land and more votes in Congress. They hid behind the idea of “Manifest Destiny” but the truth is that each section wanted the land for its own purposes. We even fought a war of it. The unnecessary annexation of Texas is a perfect example of imperialism in the United States.

The expansion campaign in America during the 19th century stretched all the way west to Oregon. Oregon was a territory that was shared with the British under the Treaty of 1818. Americans pressured the British to give up their claim to Oregon territory. This allowed the Americans to fulfill their Manifest Destiny and own land all the way to the Pacific Ocean. Not many people lived in Oregon before but suddenly, in the early 1840’s, a huge caravan of people began to move to Oregon, spurred on by manifest destiny. The land in Oregon was fertile and the fur plentiful. This trip to Oregon became known as the Oregon Trail. These pioneers fought little wars with the Native Americans along the route, argueing over posession of land once they arrived. Many Americans took their land in Oregon by the way of the gun. They pointed their guns at everything that moved in order to get their land. This is imperialism, how the government gave permission to kill thousands without giving any recognition whatsoever to who was living there before, to who’s home that might have been.

Another example of imperialism in the US can be seen by looking at the way we handled California. California was really the key to the Pacific and the trade routes with Asia and China. West Coast harbors such as San Diego, San Francisco and the Strait of Juan de Fuca were considered “the keys to the trade” and the Americans wanted them. A caravan of American pioneers embarked on the California trail and, as the Mexicans had expected, the settlers brought word back and the US now wanted to annex California. President Polk had sent an envoy to Mexico City in an attempt to purchase California and other parts of the Southwest.

In May 1846 Mexico refused the offer. This refusal was one factor–along with the Texas annexation–that led to the Mexican War. This land was not ours, we had no right to fight a war over it. That is imperialism; the extending a nation’s power by territorial acquisition, by force at times. America ended up winning the Mexican War and acquiring Texas and California along with all the trade routes, and it was phenomenal for our economy but the end does not justify the means.

To conclude Manifest destiny, the American policy of acquiring certain choice territories, can be labeled as nothing more than aggressive imperialism for that is what it is. We wanted land and we got it just because we did. We trampled over Native Americans and Mexicans just to establish trade routes and to gain political power. In the end we extended our borders by about 66% through manifest destiny, the doctrine that was no more that an excuse for Americans to become aggressive imperialists.

Manifest Destiny: Was It Really Imperialism?. (2021, Jun 16). Retrieved from http://studymoose.com/manifest-destiny-was-it-really-imperialism-essay 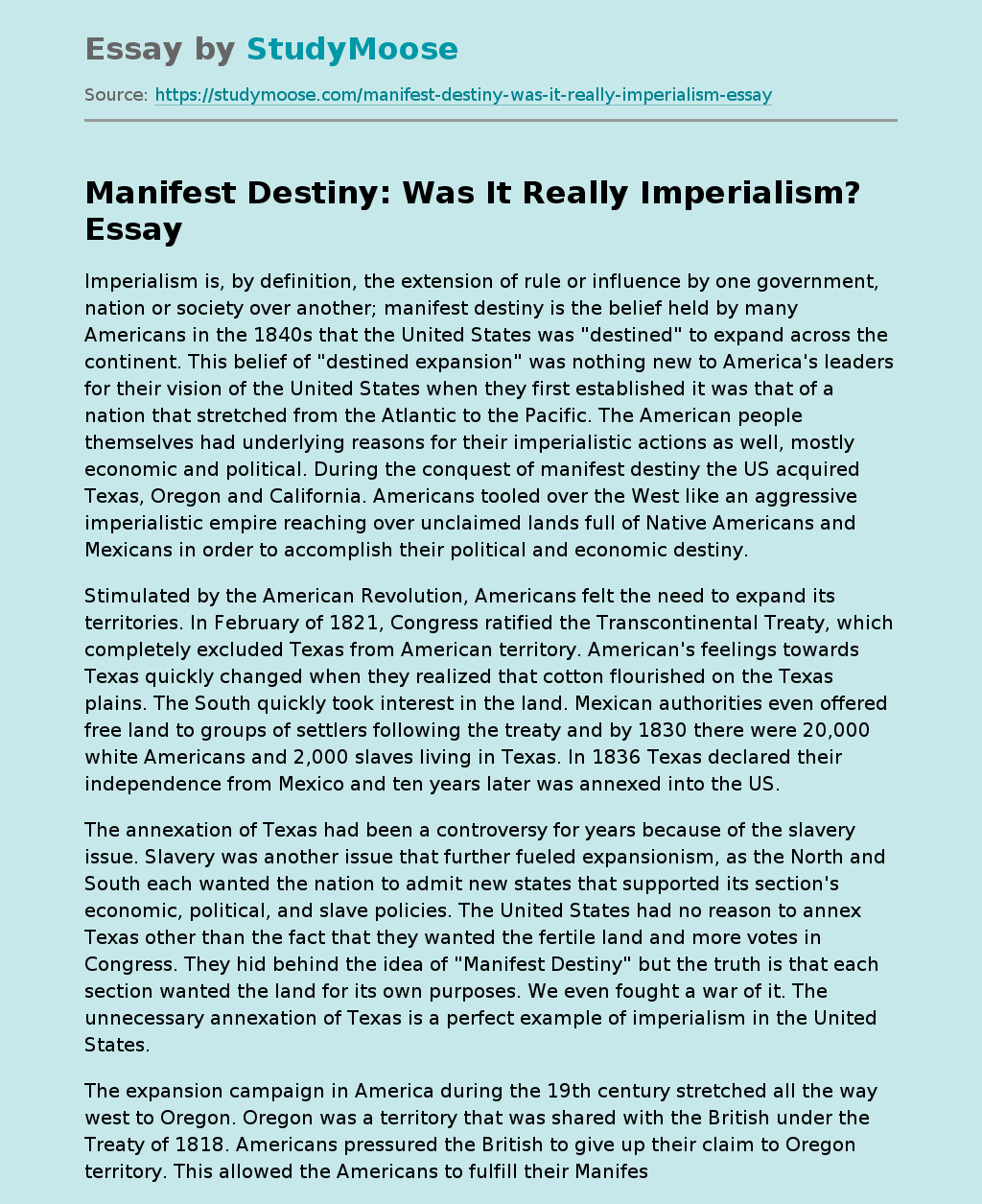