Introduction
Health is important to each and every one of us. Everyone needs to be healthy and not only physically but also mentally and psychologically. The health of any given individuals will determine how he or she functions. The purpose of this writing is to inform people on the importance of their health. As it is usually said, “health is wealth, “so each and everyone has the right and responsibility to a healthy life style. However, to have a healthy life and remain will be almost impossible without healthcare, which may be provided by but not limited to hospitals, institutions, nurses, doctors, dentists, government agencies, and voluntary agencies.

Don't use plagiarized sources.
Get Your Custom Essay on What is health Just from $13,9/Page

According to (craven & Hirnle 2009), health care in the united states has changed throughout the years and due to shorter hospitals stays and advanced technology, the population requires healthcare has increased. It is ones right and responsibility to have healthcare. The focus is on how, where, and by whom should healthcare be provided.

(ANA 2007). Even though this is a pertinent issue, most consumers are often faced with cultural and social factors while healthcare providers on the other hand face some cultural and ethical issues as to what to do in particular circumstances.

Definition:
Health can be defined in so many ways. As defined by Craven and Hirnle, Health may be state of well-being and optimal functioning. It is also defined as interactive process between the person and the internal and external environment. (p.1415). As defined by the Mosby’s Medical, nursing, &Allied Health Dictionary (6th Ed, p.783), Health is a condition of physical, social, and mental wellbeing and the absence of diseases. The Merriam-Webster’s dictionary and thesaurus (p.497) define health as sound physical or mental condition. Literature review

According to Lorian et al (2011, p 318), health is really important and they discuss various ways to improve the health of the population. They focus on health promotion and disease prevention rather than health care services. According to the authors, they believe that individuals are responsible for their own health and they hold that their health would be determined by personal habits like smoking, diet, exercise, and physical behaviors, by environmental factors like pollution, exposure to toxic chemical and contaminated food intake, by social factors like education, income, sexual behaviors, and housing.

Beal, states that according to the World Health Organization, US ranks 37 out of 191 countries. She emphasizes on the fact that infant’s mortality has reduced but then, she stated that the US still needs to do a lot as far as health is concerned. She discussed the goals and objectives of the healthy people 2020. The author states that the nation needs to identify various ways to improve on the health of its citizens, educate the entire population on factors that affect health and the various ways to promote a healthy lifestyle and prevent diseases. (Beal, 2011, p13)

Price and Thomas (2010) had their own point of view which includes improving health policies and practices, as the best way to promote health. In order to improve on the health care policies and practices, they cited Colebatch (2002) who talked on two kinds of policies: vertical policy dimension and horizontal policy dimension, which could be used in the healthcare system. Also cited was, Crinson & parkin (2009) was proposed that in order to answer the question on what kind of policy we require, a framework that supports a new revised policy must be identified.

Price and Thomas (2010) suggest that policies must have certain features such as titles must specify the age group they are referring. The health of the nation is also, greatly determine by the number of people that have health insurance. Most unhealthy individual are usually illegal immigrants with no insurance. According to Mills & Bhandari 2008, 26% of illegal immigrants cannot have insurance partly because they are barred by the government and also because their employers would not let them have insurance.

The government is already spending much on health care and it almost impossible for it to spend money on illegal immigrants. Catlin et al (2008), discuss the impact of health care on the US government. They mention that 2.1 trillion (16%) of Gross income was spent on healthcare in 2008 while Dobbs (2008) backs this up by using New Jersey as an example of how much healthcare is costing the US.(cited in baiden,p.1-6) BODY

“The states of health or diseases are expressions of the success or failure experienced by the organism in its efforts to respond adaptively to environmental challenges.”Rene Dubos” The health status of a nation would determine how the nation functions, and the activities of the nation would determine its level of health. People are faced with every-day activities that either mar or make their health. If people are unhealthy, they might not be able to carry out their daily activities.

Health is not only based on the absence of diseases but also psychological and mental aspects (Craven & Hirnle, p.1415). A nation cannot be completely health but then it should not be characterized by high levels of disease. For example, depression is something of the mind. It is not a disease like malaria, but then it greatly affects the health of individuals who is depressed. If the individual is depressed, he cannot function normally. His sleep and wake cycle, eating habits, and interaction with his environment is almost completely affected. This may therefore give room for others disease such as obesity.

Therefore, in order to maintain a healthy environment, it is important not to only focus on the cure of diseases or absence of disease, but also to maintain a psychologically and mentally environment. However, talking about healthcare is not a good idea. This is because healthcare is one of the best ways to a health environment. One would not expect to see a health environment which does not have a good health care system. The US government has come up with certain strategies to improve the health of the nation. The blueprint of a healthy nation is discussed in the healthy people 2020.

The government seeks to provide better healthcare facilities and improve the health of its citizens by promoting health, preventing diseases and educating the masses on how to take care of themselves. Beal (2011.p.13) Conclusion

It so baffling that the US in 2008, spent 2.1 trillion of its budgets on healthcare, but there is still much to be done as far as health issues are concerned. Taking a look at the ratio of nurses, physician to patients, in the US, there is an equal ration of one is to one, while on other countries like china, with a ratio of one nurse to 1000 residents (WHO2007). Looking at this data, one would come to a conclusion that the health problems faced by the US are not supposed to be blamed wholly on the government.

Though the government needs to improve on its policies and practices (price & Thomas), such problems are also caused by uninsured illegal immigrants who are barred by the government, and by their employers (Baiden 2010), unhealthy personal and social behaviors, and the environment in which people find themselves in (Beal 2011, p.13).

In order to have a healthy life, it is the right and responsibility of every individual to take care of himself physically, mentally, psychologically and spiritually. Health is important in my field of study because my goal is to see people healthy. As such I have to take the entire necessary step to help people improve on their health.

What is health. (2016, May 10). Retrieved from https://studymoose.com/what-is-health-essay 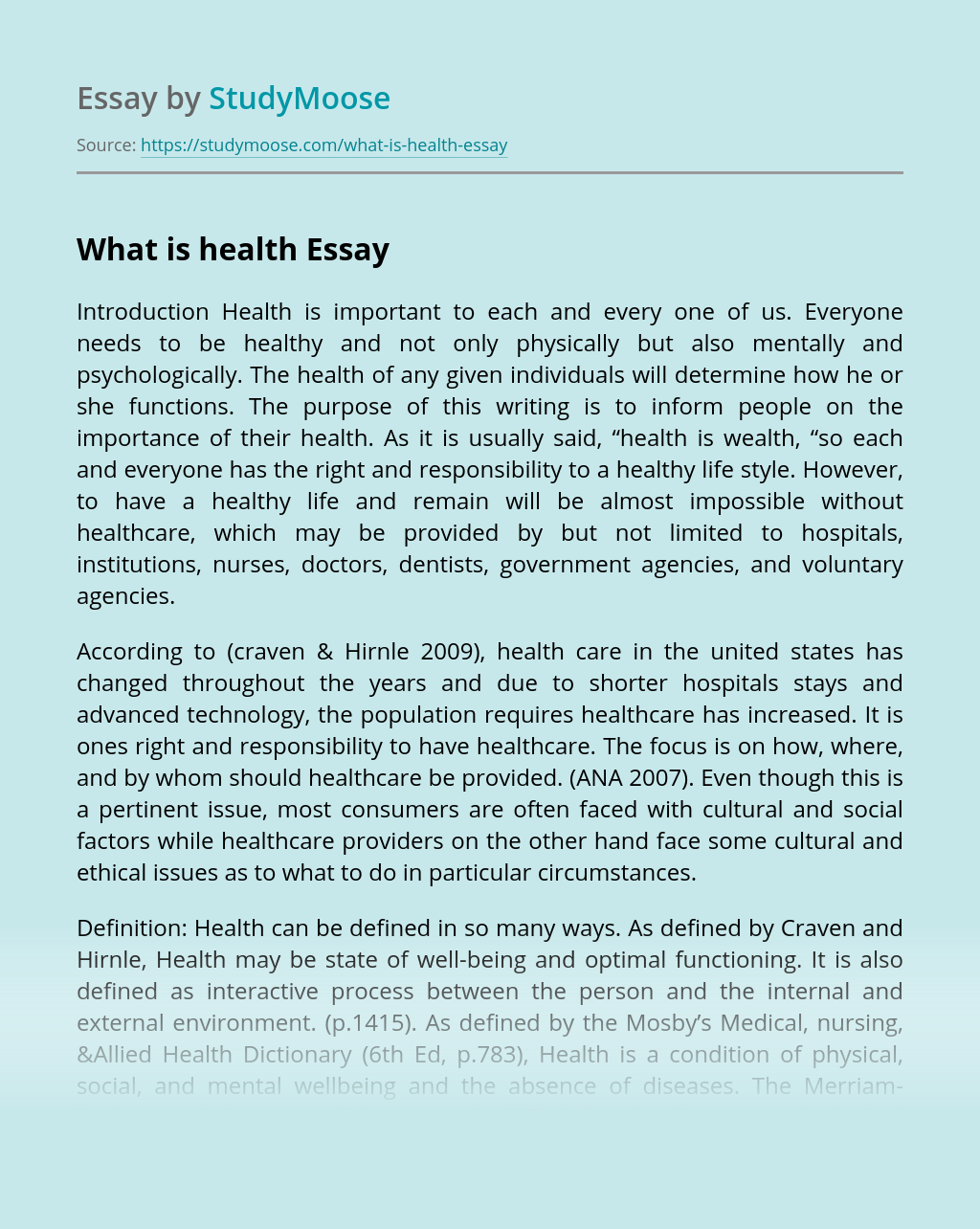 Introduction Carphone warehouse is a mobile phone retailer founded in 1989 in an era when phones were too bulky, hence being referred to as carphones. It’s based in UK and has over 1700 stores across Europe. Outside the United Kingdom and Ireland, the company carries on its business under the name phone house. Carphone warehouse...

National income is a measure of production activity. So, a higher national income overtime should mean more production and more availability of goods and services to the people. Should more goods mean that people are better off? Are they better of in physical terms, or in psychological terms or both? Are there things other than...

Great Divergence: primary themes and main arguments by Timothy Noah Introduction        The most striking change in American society in the past generation roughly since Ronald Reagan was elected President has been the increase in the inequality of income and wealth. Timothy Noah’s “The Great Divergence: America’s Growing Inequality Crisis and What We...

Injections and Withdrawals are necessary functions in our understanding of financial activity and business cycle. Explain the relationship in between them and how they affect nationwide earnings. * Injections-only part of need for companies occurs through consumers, the remainder originates from other sources outside the inner flow. Investment- This is the money firms invest after...