What is good health?

The definition of health is ‘the state of being free from illness or injury’ (Definition of health, 2013). There are five main components of health including physical, mental, social, environmental and spiritual health. All of these five components have inter-relationships in one way or another and can both positively and negatively impact the well-being of a person. An example of this is the strong link between physical health, spiritual health and mental health. Being physically healthy and exercising does not only improve your mental health but also your social and spiritual health as well.

Don't use plagiarized sources.
Get Your Custom Essay on What is good health? Just from $13,9/Page

Scientists have proven that poor physical health brings an increased risk of depression, as do the social and relationship problems that can be common among people. This essay will examine why all five components of health are important in maintaining well-being and be able to function and contribute to society. Physical health is when the body functions at its optimal level, is free of disease and functions as it is designed to.

In order to have good physical health we need to look after our bodies so they can work as best as they can. Nutrition and exercise are critical to the body functioning properly and to be healthy. Nutrition is essential for energy and for the body to continue to work as it is designed to. Exercise is important for the body to keep good muscle tone and keep your lungs functioning well. People who do not do sufficient physical activity have a greater risk of cardiovascular disease, colon and breast cancers, Type 2 diabetes and osteoporosis. Low levels of physical activity are a major risk factor for ill health and mortality from all causes (Australian Institute of Health and Welfare). Being physically active improves mental and musculoskeletal health and reduces other risk factors such as overweight, high blood pressure and high blood cholesterol (Australian Institute of Health and Welfare 2013).

The National Physical Activity Guidelines for Australians recommend that we should undertake at least 30 minutes of moderate-intensity physical activity on most days of the week (Australian Institute of Health and Welfare 2013). The World Health Organisation’s definition of mental health is “a state of complete physical, mental and social well-being, and not merely the absence of disease” (WHO 2013). In simple terms it is good brain health (Grohol 2008). Many people consider good mental health to be the emotional and psychological well-being where you can cope with normal stresses can work productively and can make a good contribution to their community (Mental health basics, 2011). Mental health describes our social, emotional, and psychological states, all wrapped up into one (Grohol 2008). Staying active and having some daily exercise in your life contributes to good mental health, as does having a good life balance with work and your social life (Grohol 2008). The lack of these things in a person’s life may also lead to poor mental health or mental illness. The Australian Institute of Health and Welfare (2013) states that symptoms of a mental disorder were experienced at some time during a twelve-month period by an estimated 3.2 million people (20% of the population aged between 16 and 24), while 7.3 million (45%) reported a lifetime mental disorder (Australian Institute of Health and Welfare 2013). Improving mental health means to value and accept yourself (2003 Mind). It is also important to take care of your body, exercise, get plenty of sleep as well as surrounding yourself with good people who care about you.

Good social health mainly focusses on yourself and who you feel comfortable around in your everyday life. This also includes good social skills and the ability to listen. Having good relationships with friends and family and being able to communicate openly and confidently with people around you is an example of good social health. Positive impacts of good social health include a sense of contentment, a zest for living life, the ability to deal with stress, a sense of meaning and purpose, a work-life balance and having self-confidence and high self-esteem (Smith et al. 2013). Poor social health could be described as someone who is opposite to this. They are withdrawn, isolated and do not socialise with many people. An example of this type of behaviour would be someone who suffers from agoraphobia. Agoraphobia can be described as someone who fears being in crowds, public spaces or open areas and may experience an anxiety or ‘panic attack’. They may avoid leaving their home for a long time (State Government Victoria 2013). In order to maintain mental and emotional health, it’s important to pay attention to your own needs and feelings. Don’t let stress and negative emotions build up. Try to maintain a balance between your daily responsibilities and the things you enjoy. If you take care of yourself, you’ll be better prepared to deal with challenges if and when they arise (Smith et al. 2013).

Environmental/cultural health looks at all the physical, chemical and biological factors external to a person. Environmental health encompasses the control with the assessment of the environmental factors that can eventually affect your health (WHO,2013). Australia has a relatively stable environmental health. For example, the rate of people without homes or shelter is low and has good access to clean drinking water, good food, medical facilities and supplies as well as the ability to feel secure in their home. The availability of these things in our day to day lives allows a good standard of living and an awareness and appreciation of other cultures. This in turn leads to a more united nation as a whole with integrated communities resulting in a strong workforce and good economic climate (Unknown, 2013). On the other hand, the environment in which we live can also have a negative impact on our environmental/cultural health. If we do not have access to supplies like clean water and good food then this can lead to a reduction in the health and emotional well-being of people. The World Health Organisation (2013) states that 23% of the world’s diseases are due to poor environmental health. In children, environmental risk factors can account for slightly more than one-third of the disease burden (WHO, 2013). There are a number of ways to improve environmental/cultural health and these include reducing poverty and closing the gap between the wealthy and the poor. This in turn would help in raising the standard of living and therefore reduce illness and disease. Governments can also assist by providing the basics of clean water and provide the mechanisms in which people can look after themselves better.

In Australia, the government aims to improve public health in areas such as emergencies, natural disasters, water supply, health services and improving the living standards of indigenous and islanders in Australia . Spiritual health is an important part of a person’s well-being. Your “spirit” usually refers to the deepest part of you, the part that lets you make meaning of your world. Your spirit provides you with the revealing sense of who you are, why you are here and what your purpose is for living. It is that innermost part of you that allows you to gain strength and hope (Thompson Rivers University, 2013). Many wellness behaviours can benefit your spiritual health. Such behaviours include feeling connected with others, feeling part of a community, volunteering, having an optimistic attitude, contributing to society and self –care (Thompson Rivers University, 2013). A lack of spiritual health may lead to negative impacts in a person’s life including a lack of connectedness and sense of belonging which could in turn affect relationships with family and friends and lead to depression. Some ways in which to improve spiritual health include taking time out for yourself, be open with the people around you, be non-judgmental and have an open mind, be receptive to pain or times of sorrow, practice forgiveness and live joyfully (Thompson Rivers University, 2013). While all aspects of health can be differentiated from one another, they are also interrelated and can have additive effects on wellbeing (Psych Central 2013).

For example, physical and mental health are affected by one another in some cases. A lack of physical health and well-being can compound mental health issues such as depression. The combination of heart disease and depression can cause twice the reduction in social interaction than either condition alone (Psych Central 2013). We have also seen how poor environmental/cultural conditions can lead to issues in social, physical and mental health and affect people’s ability to fit into the world around them. Similarly, a sustained lack of sleep can affect someone’s mental abilities and capacity to function normally like a healthy human being. Ultimately, all aspects of health can affect a person’s spiritual health and their feeling of connectedness, being part of a community and being able to contribute to society. It is therefore evident that all aspects of health play an important role in a person’s well-being and that all aspects of health combined are as important as each on their own.

What is good health?. (2016, Feb 23). Retrieved from https://studymoose.com/what-is-good-health-essay 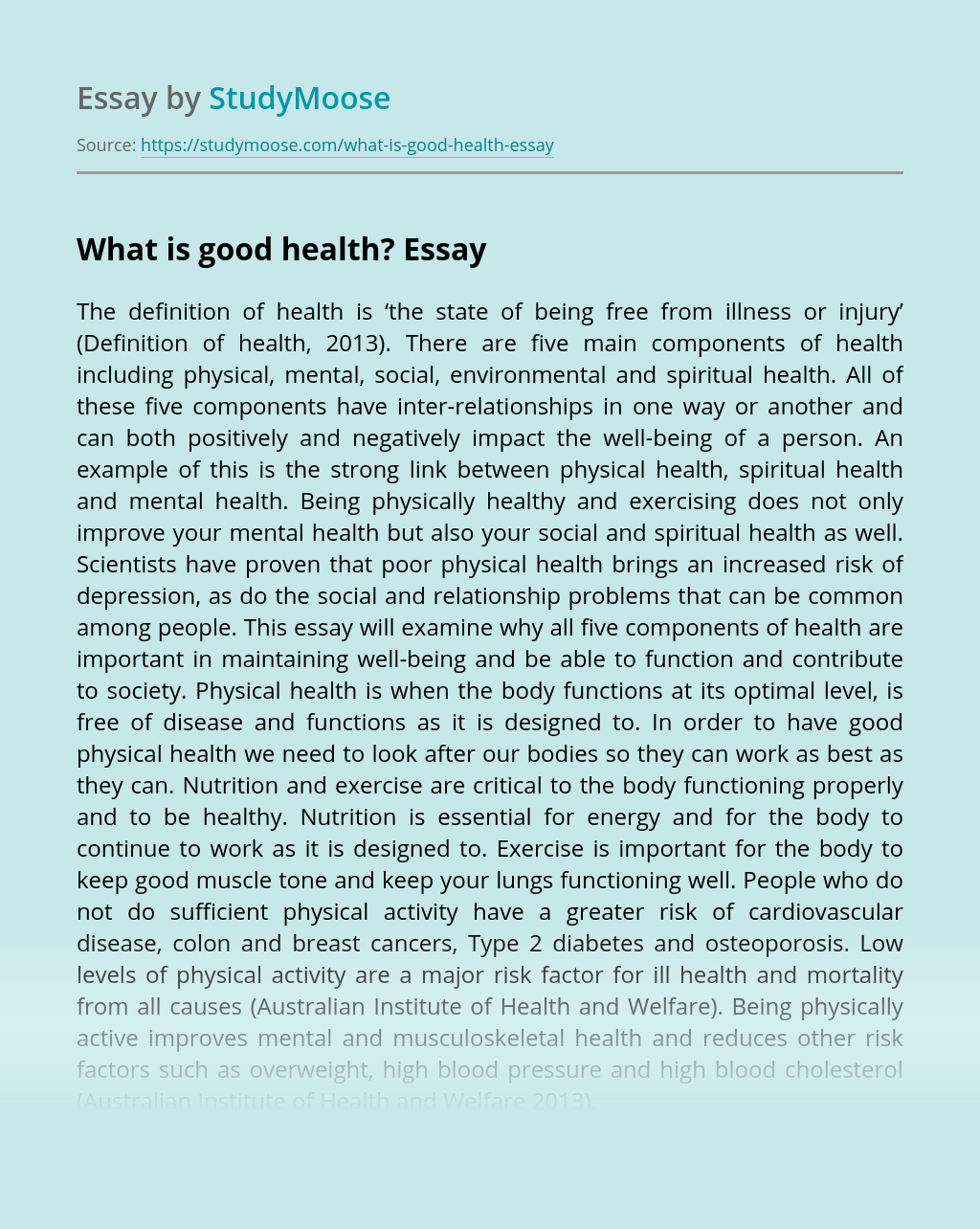 How to Lead a Long and Healthy Life Speech

Good Health starts from the very infancy. It is here that protection and care is needed, so that each organ functions well, each organ develops naturally, and there are no deformities, disabilities and diseases but often the health of children remain neglected, with the result that they grow unhealthily and that affects their education as...

View sample
Get Essay
Centers for Disease Control and Prevention

Center of Disease Control and Prevention (CDC) The center of disease control and prevention is one to the most important and outstanding centers in the world. Their job is to inform the United States population of the different diseases and inform them on how to prevent them. The CDC is one of the centers that...

Course Description: Continued study of nursing models and application of relevant theories to guide nursing practice as it pertains to health promotion and risk reduction. Using the family as the essential unit of care across all environments within the community, critical thinking and clinical decision-making processes will facilitate the design, management, and provision of care...

“‘Good health implies the achievement of a dynamic balance between individuals or groups and their environment.'” (Better Health Commission 1986, cited in Carey, D., Perraton, G.; Weston, K. 2000: 3). According to the World Health Organisation (WHO), ‘health’ can be defined as the absence of illnesses and a state of mental and social well-being (Carey...