Hemingway’s story “Hills Like White Elephants” appears, on the surface, to be a simple short-story, composed mostly of dialogue, with little overt action or final resolution, the story, far from being slight on theme or technique actually represents many levels of meaning. Hemingway’s natural-sounding language his naturalistic descriptive technique helps to “disguise” the deeper inferences of commonplace objects and common-sounding dialogue that are described in the story.

In order to heighten the sense of double-meaning, Hemingway stripped away expository writing, which is the releasing of direct information to the reader which will help the reader to place the action of the story in context.

Don't use plagiarized sources. Get your custom essay on
“ What ‘Hills Like White Elephants’ Reveals? ”
Get custom paper
NEW! smart matching with writer

Rather than weigh down the narrative with expository writing, Hemingway chooses to leave this story lean and bare, consisting primarily of conflict-charged dialogue between the story’s two main characters.

By refusing to included background information or even internal monologue on behalf of the two characters.

The lack of final resolution is notable enough that even critics are left to their own devices to decide what happens to finish the story and conclude the conflict between the two characters. The character of the “girl” in the story represents, one side of the conflict which is hinted at in the story’s odd title.

The conflict implied by the title: the burdensomeness of something unwanted a “white elephant” combined with the nature-symbol of hills suggesting rich and fecund fertility extends throughout the entire story, forms its basic thematic premise, and functions as a sort of “axis” by which the changing attitudes and evolving conflict between the characters spins.

The struggle in the story becomes not merely the struggle to direct or control a relationship, but a struggle to define one’s self and defend (or impose) one’s subjective desires and ambitions over the world at large.

In this way, the girl is a symbol for the natural world, of nature itself, and vice-versa, the nature imagery of the story is associated with the figure of the girl. By implication, this places the male character of the story in conflict, not only with the girl, herself, but with nature, a fact which is sustained by the nature of his own argument within the context of the story. One of the important aspects of the conflict in the story is the question of who “wins” the conflict: the male or female character.

To extrapolate a probable resolution for the conflict in “Hills Like White Elephants” it becomes necessary to examine the conflict which lies under the overt abortion-question of the story. The girl, as a symbol for nature, stands for more than a simple impediment to the man’s desire to live an unfettered life: it is the symbol of everything commonly associated with a submission to nature and natural processes: including death.

If the story is, indeed, about the “capitulation” of the girl, then her refusal to capitulate is evident from the action of the story. The girl does, win the conflict: nature triumphs over “man. ” This is shown in the story’s closing action. To fully understand that the girl has not capitulated to the man in the story, is is necessary to embrace Hemingway’s use of narrative “silence” as a method for transmitting crucial information in his narrative fiction.

What 'Hills Like White Elephants' Reveals?. (2016, Oct 08). Retrieved from https://studymoose.com/what-hills-like-white-elephants-reveals-essay?post 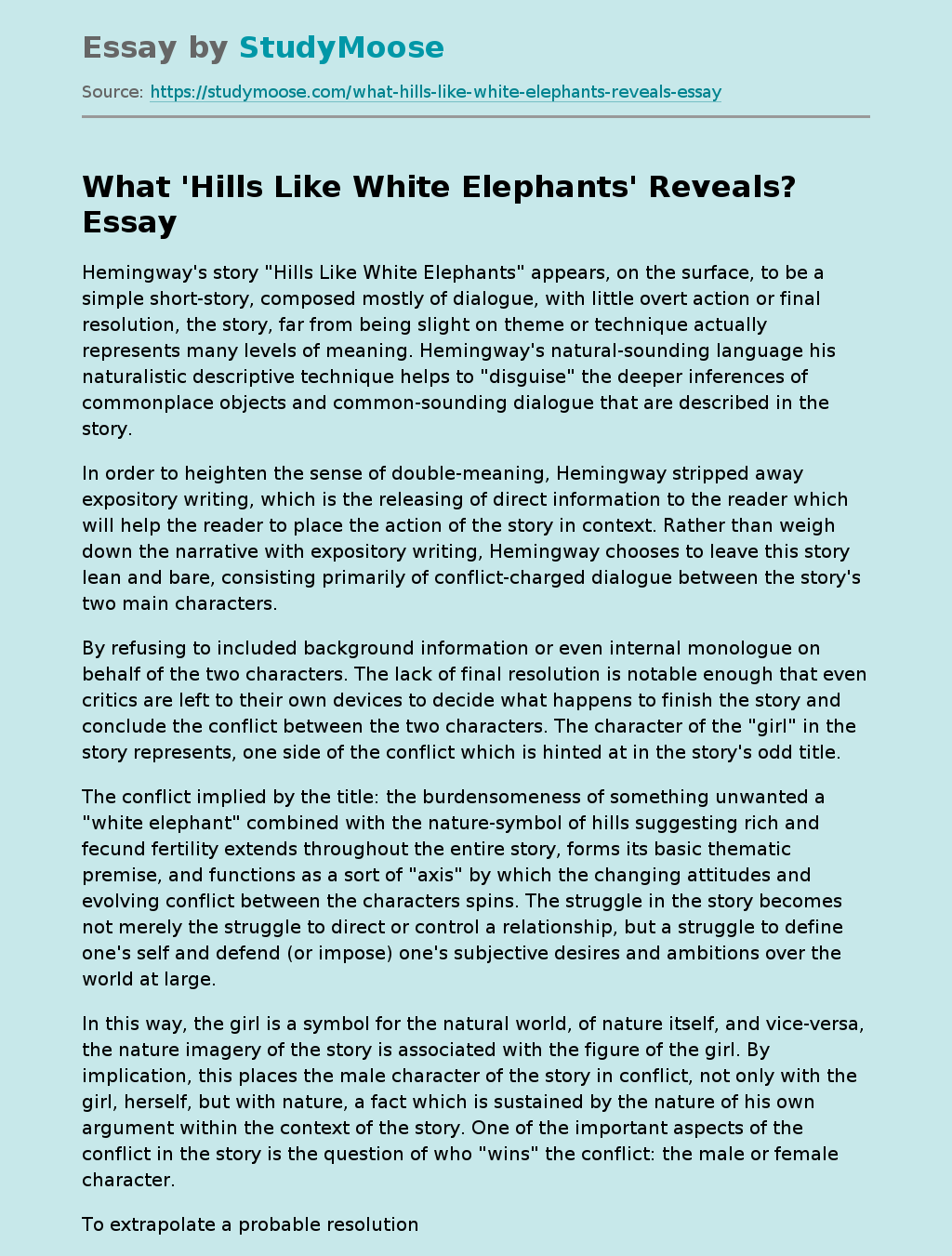