What Are the Pros and Cons of Raising the Minimum Wage?

The premise that raising the minimum wage would increase economic activity and spur economic growth was selected because the economy would be highly boosted due to an increase in the GDP of the country.

Don't use plagiarized sources. Get your custom essay on
“ What Are the Pros and Cons of Raising the Minimum Wage? ”
Get custom paper
NEW! smart matching with writer

The GDP would increase because households would spend more money, and this would lead to the creation of jobs (Card et al, 2013). If there are more jobs for citizens, more people will be able to contribute to economic growth through the jobs they do.

The pro that increasing the minimum wage would reduce poverty was also selected because most people live below the poverty line because of the low minimum wage.

The low minimum wage enhances poverty since most people are unable to afford even the low standards of living (Card et al, 2013). If the minimum wage was increased, a lot of people would be driven out of poverty, especially the elderly.

The government would, therefore, not need to fund any welfare programs and would save that money for something else.

If I believed in the view that raising the minimum wage would increase poverty, I would notice that there would be an overall decline in the earned income due to the employment declines. I would also notice that the minimum wage should not be increased since it would heighten the costs of production. If production costs are high, the price of goods increases, therefore, purchasing power reduces (Maloney et al, 2010).
This idea that higher minimum wages increase poverty levels would be true when there are higher levels of unemployment. When many people are poor, it would mean that they have been unable to find jobs due to the decrease in levels of employment as employers would be forced to comply with the minimum wage requirement (Maloney et al, 2010). The idea would also be true when lower quantities of goods are produced by manufacturing companies due to the decrease in demand, causing them to lay-off some employees.

The interesting thing about the premise that a minimum wage increase would hurt businesses and force companies to close is that there would be a reduction in the number of companies hence a decrease in the number of employment opportunities available. Businesses would be forced to pay higher wages to their workers, which they might fail to afford (Mincer, 2016).

If I believed in this view, I would notice the negative impact of a decrease in the number of businesses caused by an increase in the minimum wage. The closing companies would also let out a lot of workers. The stores which are yet to open would also fail to open due to the fear of paying high wages to the workers (Mincer, 2016). This idea might be true when businesses are small scale and lack enough funds to stick to the high minimum wages.

After playing the believing game, my thinking about the topic has changed. Although it is good to increase the minimum wage, it is also advisable to check the cons associated with increasing the minimum wage and weigh the cons versus the pros in order to determine which view to take.

What Are the Pros and Cons of Raising the Minimum Wage?. (2020, Nov 12). Retrieved from https://studymoose.com/what-are-the-pros-and-cons-of-raising-the-minimum-wage-essay 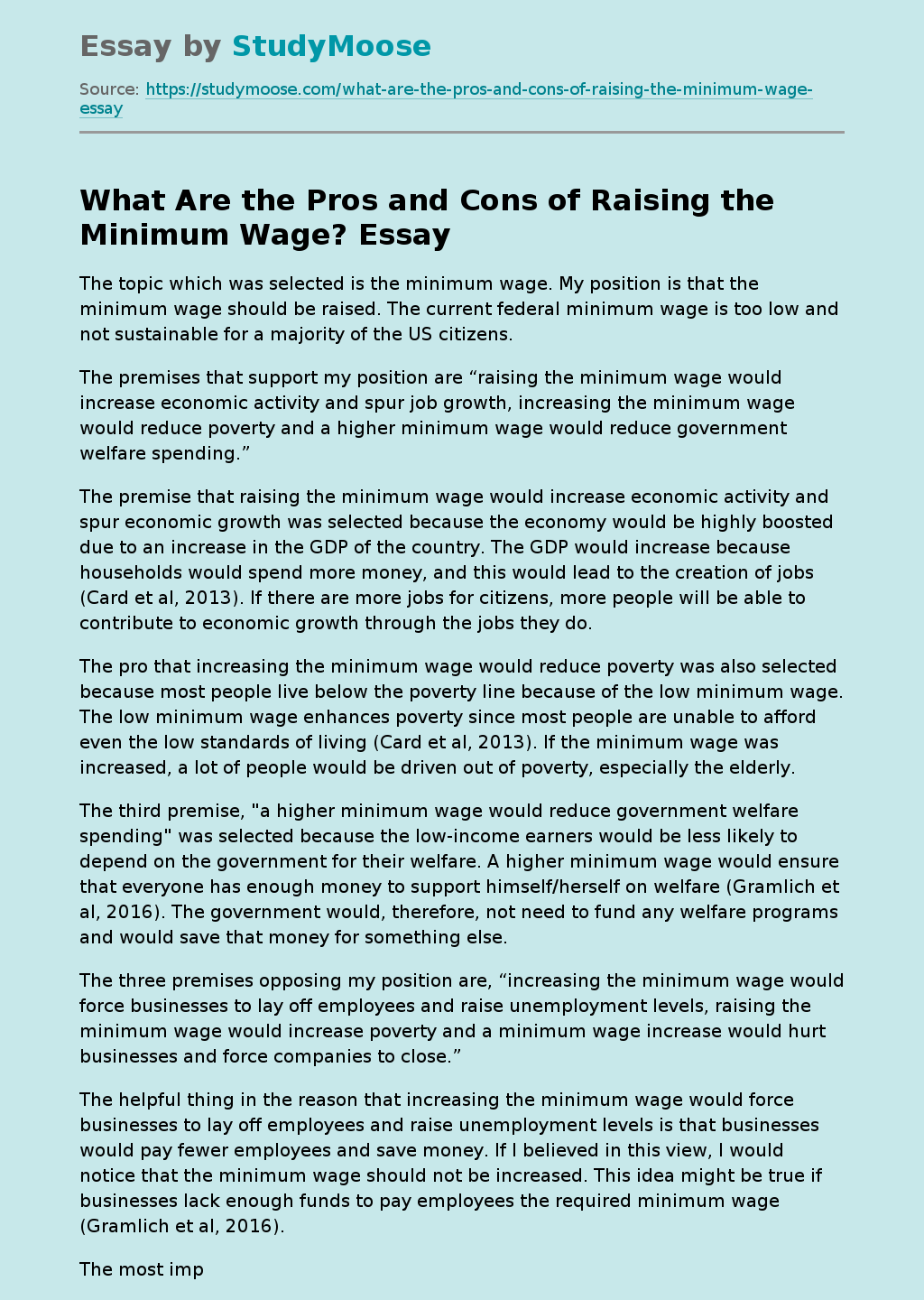