What Are the 3 Categories of Driving Distractions?

Benjamin Franklin, an inventor and one of America’s Founding Fathers, once stated, “A stitch in time saves nine.” Driving can be a wonderful experience, giving drivers the freedom to come and go wherever one may choose quickly and conveniently.  Driving could also lead to bad experiences. It could lead to car accidents and even death. To be behind the wheel calls for adept attention on the road.

Don't use plagiarized sources. Get your custom essay on
“ What Are the 3 Categories of Driving Distractions? ”
Get custom paper
NEW! smart matching with writer

Many may find it hard to believe but overcautious drivers are one of today’s most dangerous drivers. These drivers could cause and slow up traffic, drive below the speed limit, frustrating other drivers because they’re indecisive, creating more hazards being too careful.

According to Scott Atkinson, a personal injury lawyer at Atkinson Law Firm, a study shows that in the United Kingdom, those who drive too slowly may pose a significant danger of causing serious traffic accidents.

The study found that nearly a third of all drivers experienced a near-miss involving motorists who were driving slow enough to disrupt the flow of traffic.

A few years ago, I was riding a passenger with a friend and we encountered a driver who slowed down and stopped his vehicle, causing unnecessary traffic behind him. Other divers got frustrated and honked at the overcautious driver. This resulted in the overcautious driver running a red light, nearly missing an 18-wheeler.

Distracted drivers are far more dangerous than overcautious drivers.  These drivers drive while their attention isn’t on the road like it’s supposed to be. Instead of paying attention to the road, they’re on their phones texting and calling, conversing with passengers, or eating and drinking.

Distracted drivers tend to get distracted because they feel that they can multitask as if whatever they’re doing is more important than making it home safe. According to the National Safety Council, people using cell phones while driving causes up to 1.6 million accidents each year, which is 1 out of every 4 car accidents.

There have been times where I’d receive a text message while driving. Instead of being smart and pulling over, I’d rather text and drive. This has caused me to take my attention off the road, which could’ve resulted in a car accident.

Transition: As bad as a distracted driver sound, it is nothing compared to the most dangerous driver of them all–aggressive drivers.

By far the most dangerous drivers of them all…Aggressive drivers.  Most drivers take their time to reach their destination. Unlike most drivers, aggressive drivers squeeze their way through the smallest opening they can find, weaving and speeding through traffic as if they were in a police chase, tailgate drivers, don’t pay attention to traffic signs, cut and block off drivers, and even change lanes without signaling.

In 2010, an associate director of planning and public policy for United Way of King County, Colleen Laing wrote a guide Aggressive Drivers which stated about 2 out of 3 of traffic fatalities involve behaviors related to aggressive drivers. When I received my license was the first time, I encountered an aggressive driver. I remember being tailgated by a driver who seemed to be in a rush. The driver then proceeded to honk at me. If that wasn’t enough, he swerved to another lane, cutting me off and running a red light. His action resulted in the driver t-boning an oncoming car.

Aggressive drivers tend to drive aggressively because of their emotional status, making them prone to more car accidents than distracted drivers and overcautious drivers.  For example, picture a driver running late for work. Since he won’t get to work on time, he becomes infuriated and takes his anger out on other drivers on the road, causing him to speed.

According to the National Conference of State Legislatures (NCSL), in 2015, speeding became a contributing factor in 27% of the fatal crashes and 9,557 lives were taken. Transition: Now that we’ve looked at all of today’s most dangerous drivers, I would like to go over it again.

In conclusion, drivers are prone to encounter dangerous drivers such as overcautious drivers, distracted drivers, and aggressive drivers.
These driver’s behavior can be the reason an innocent life can be taken away. My advice to drivers on the road is to stay alert for these dangerous drivers. Do not let anything or anyone become a distraction while on the road and never drive while emotional.  As a saying I’ve always heard, “Always have the mindset that you are the only sane driver.”

What Are the 3 Categories of Driving Distractions?. (2020, Sep 12). Retrieved from https://studymoose.com/what-are-the-3-categories-of-driving-distractions-essay 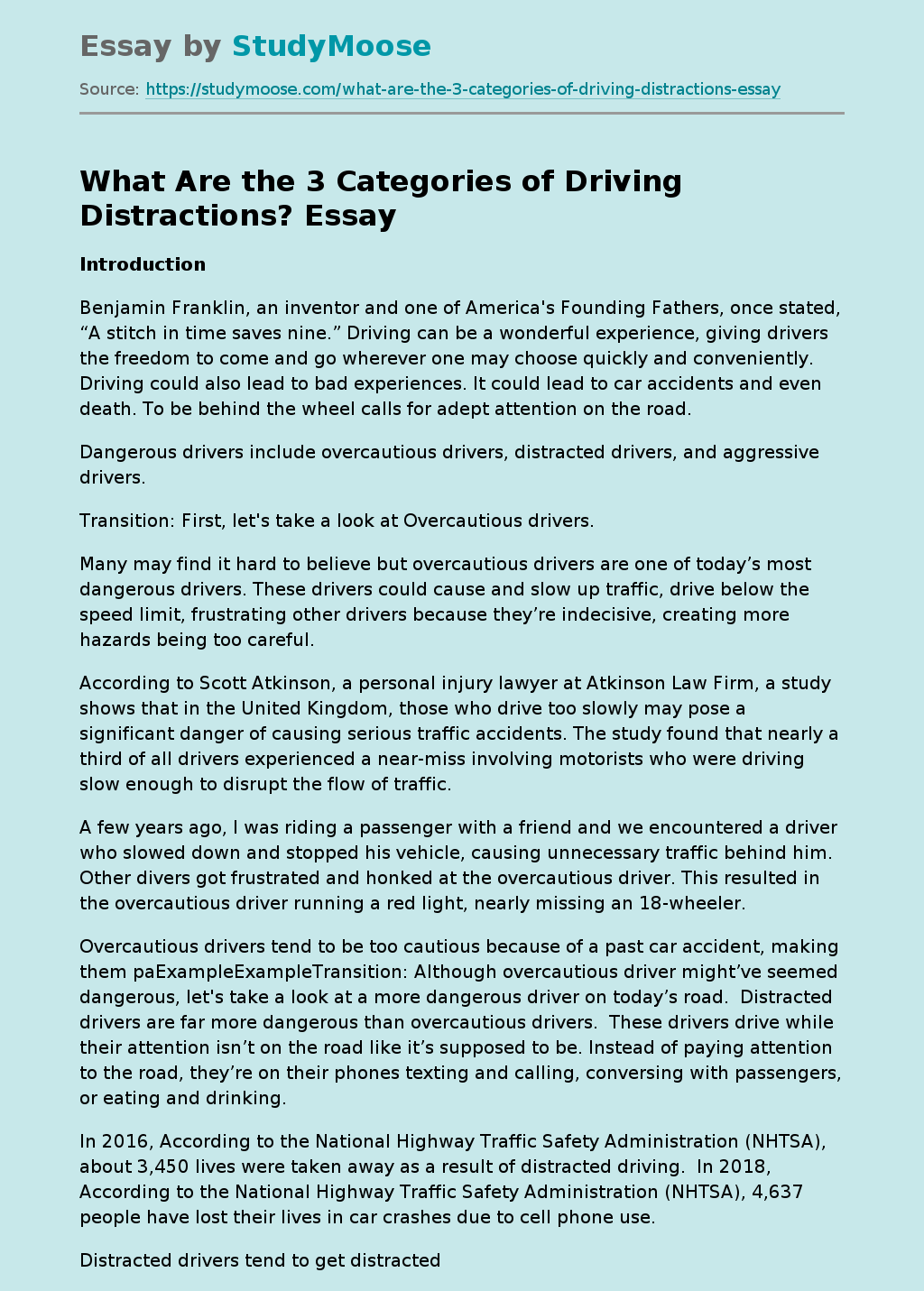