I have applied for a job as a web designer within the MIS department of college sir gar, and I have been shortlisted for an interview. Prior to the interview, I have been asked to produce a series of short reports based of several web related issues, and I have to submit them before the interview takes place.This will help the interview panel prepare suitable questions to ask me and help them decide who they should employ, partially based on their knowledge of web related subjects.

Don't use plagiarized sources. Get your custom essay on
“ Web Architecture and Cloud Computing ”
Get custom paper
NEW! smart matching with writer

Web hosting – Web hosting services are companies that give you the option of purchasing their service which is to provide a server to you that is connected to the world wide web/internet. They often offer you fixed amounts of space that if you want more you will need to upgrade, but other than that they allow you full access to the web server often via a client panel within their web site or via FTP which information will be provided to you. Sites such as GoDaddy, 123-reg, Tso host and many more offer web hosting.M1Web 2.0 ” Web.20 isn’t so much as a physical device or piece of hardware that is put together, web 2.0 is a list of rules/methods that are put together to structure a website.Before Web 2.0 the sharing of information was only done by the owners and not with the other users, it was also very basic sharing as well. Web 2.0 has revolutionised to allow the users around the world to share information which has made it easier for everyone sound the world who use computers.

Social media platforms are becoming more popular and millions of people daily are signing up to social media sites, also people are now adding posts from Facebook and twitter on to their own website if they want to show their site viewers info. Web storageWeb storage Web storage was a big result with web 2.0. This is still new with the users and is being used regularly with others. Cloud computing is where programs, files and even photos are stored online instead on drives or the computer. With this the documents can be modifed within the storage, this is handy as this cannot be lost whereas a pen drive can. This technology counts in demand technology; this is an advantage of having files, photos and other documents anywhere on any computer when using and connected to the web/internet. Though it is easy to use, there are risks such as security, hackers could easily get into your information and any viruses could corrupt as well, also the service could crash sometimes making it difficult to get to your information. There would always be problems with many things but cloud computing is reliable and safe and easy to access your files, documents and photos which is why its becoming more and more popular day by day.

Cloud computing offers the basis of functions but instead of the user using cloud computing for websites and applications the user uses it to store their personal data, such as documents and images, in the cloud instead of just on their local device. This means that if their local copy is destroyed on their local device or becomes corrupt then they can easily retrieve all of their personal documents safely and easily. Cloud storage also allows you to access your personal files from anywhere in the world as long as you have an internet connection which is extremely useful for businesses who are international as it allows their employees to exchange documents across countries in order for them to do their job. I personally have used cloud computing to exchange work from college to my home computer which makes it easier to work.

” P2Download Speed – Download speed is the amount of data the user can download per second and is capped by their ISP. Download speed can effect the loading time and performance of a website in many ways on the user end of the system. If the user has a low download speed, then the webpage will take longer to load and complete tasks that the user is asking it to do.

This is a user side factor that will influence the performance of the website that the user is trying to access. Slow download speeds will create a long waiting time in loading the website, and so performing tasks such as loading videos, clicking on hyper-links and navigating through the websites pages will take a long time and can become frustrating for the user on the site.

Cache Memory-Cache memory is temporary memory stored on your computer. A computer with a larger cache memory will be able to store more of the temporary things that websites need to run. Cookies, passwords and other scripts that websites generally perform when you access the website. A larger cache memory will allow for more of these to be stored, allowing for quicker access and quicker website performance.Processor Speed-The speed of the users processor will be a factor that influences the performance and speed of websites. A processor with a higher speed will allow the computer to perform tasks quicker, thus processing websites and all the scripts, cookies and other tasks that websites have on them faster. A higher processing speed will also allow videos and flash animations to load faster on webpages.

” P3Security Risk – Viewing any sort of information over internet can involve risks. When a user exchanges personal data such as banking or emails, the user is sending important packets of data over variety of networks, these packets are very easy to track and intercept, a hacker can gain this important information and commit a crime called identify theft.Hacking – Hacking is a malicious users who intend to exploit weaknesses in a computer and its internet software. They intend to force their way into the computer and discover personal information on the owner of the computer, and use it for identity theft or other malicious intent and its very common in this day and age so its important to have security on your computer.

Phishing ” Phishing is the act of taking a secure website, such as the login page for an online banking account, and copying it in its entirety and uploading it to another website with an almost identical address. The website will tell the user to login, and once they have logged in with their username and password or their personal details, the website will show a page informing the user that the website is down for maintenance.

Meanwhile, the user’s information is being sent to malicious users in another country, who will use the information to sign into their online banking and steal from them.Identity Theft – Identity theft is when malicious users use software, such as Trojans, to gain personal information on people and use it to steal their identities and use them for personal gain. They will gain their identity through passports, driving licenses or other ways of confirming a person’s identity, and using them they will open bank accounts in their name, withdraw money from their bank accounts and commit fraud.

Firewall -This is software and also can be a hardware based on network security. This system controls incoming and outgoing traffic within the network. It analyses the data and chooses whether it is allowed to go through or not. Overall it is a device that is used to deny viruses based on a set of rules.

” D1The Internet is referred to as a network of networks and there are three main components that will allow it to work in full function. The three components include hardware, protocols and software.TCP/IPTCP/IP stands for Transmission Control Protocol/Internet Protocol which is a set of rules that define packets of information must reach the end user and if necessary it will then resend the packets of information. The TCP is used to give the data across to the IP networks, it basically establishes a connection between devices with requests and replies across a physical network. There are other protocols linked with TCP/IP such as:SMTP – Simple Mail Transfer ProtocolFTP – File Transport ProtocolHTTP – Hyper-Text Transfer Protocol

File Transfer Protocol is the protocol that takes take care of the transfer of files between computer systems such as uploading webpage’s onto a web browser. What is IP?This stands for internet protocol, this is a label assigned to every device that is connected to a computer network. The IP has two functions, location addressing and hosting or network interface identification. The IP is responsible for the address. If we didn’t have it then the packets would not know where to go. We have IP’s to ensure that the packets reach the correct destination and also IPs can tell people everywhere where someone lives and each internet has a unique IP.

The Internet Layer is the IP part from the TCP/IP protocols. This layer will define the IP addresses that can be used as well as how the router will use these IP addresses to find the right destination. The Internet Layer will add the addressing information on to each of the packet headers such as the sender IP address and the destination IP address. Once this layer has been completed it will then pass the right packet with the address to the next layer known as the network Interface Layer. Network Interface LayerWhen the packets are sent to the Network Interface Layer they are sent over the local network to the local Internet router. Once this layer has found the local Internet router, it is then passed back to the Internet layer. An example can include a college sending packets from a computer system over the colleges Ethernet network, which should be in the correct format for Ethernet. The packet will then reach the college Internet router, which will then transfer the packets into the cloud (Internet). Another example could be users at home using a wireless network. The principle is similar however; the packets are required in a different format. 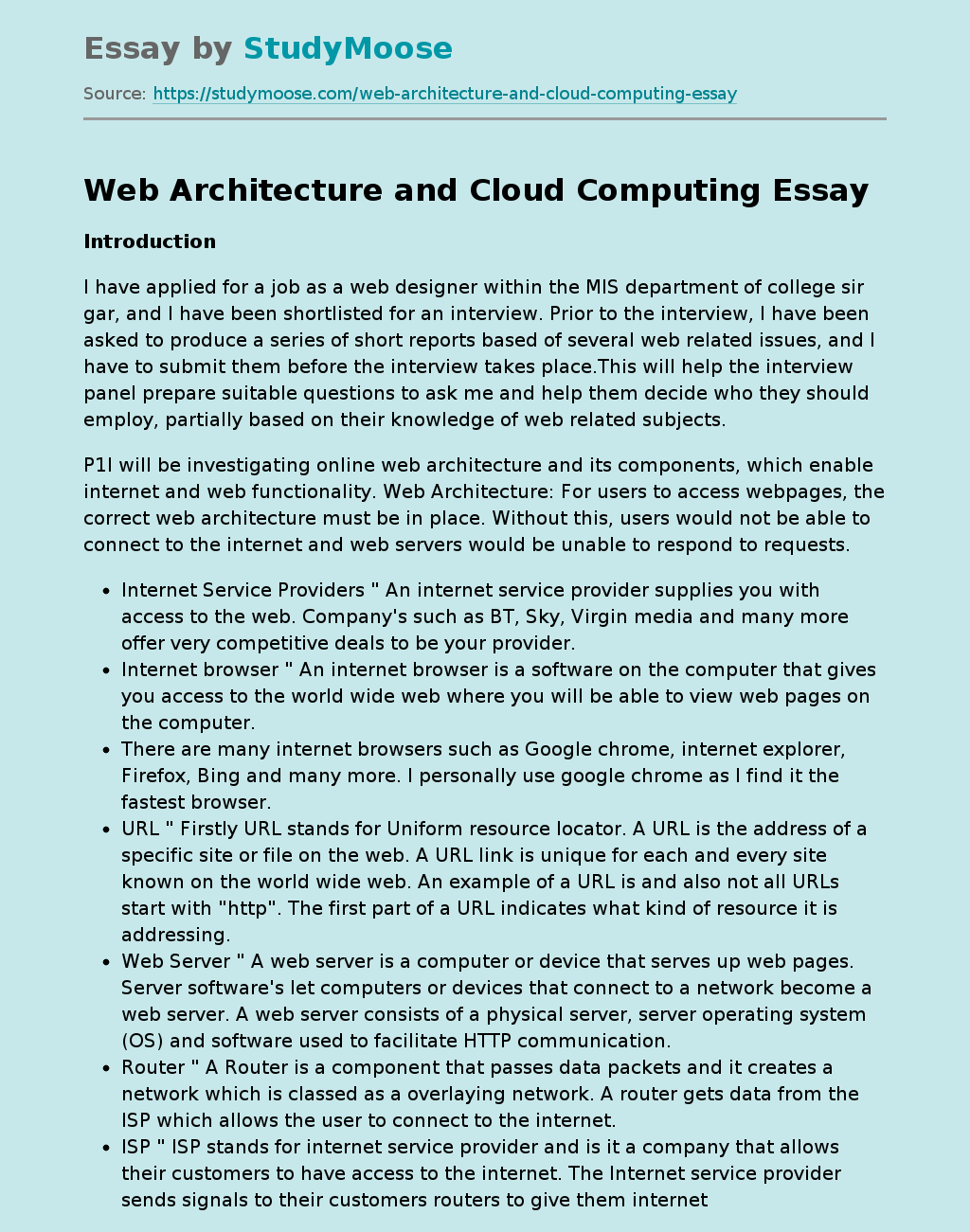