In William Shakespeare’s Macbeth, the Scottish general Macbeth is told prophesies by three witches. These prophecies and encouragement from his scheming wife leads him to go through with terrible acts of murder in his attempts to disrupt the chain of being.

Throughout the play when Macbeth is doing these things, chaotic weather is used as an expression that reflects unnaturalness in the universe and disruption of the chain of being.

The witches and their power to predict the future is very unnatural, the weather reflects this by becoming chaotic whenever the witches are in a scene.

Don't use plagiarized sources. Get your custom essay on
“ Weather Symbolism in Macbeth ”
Get custom paper
NEW! smart matching with writer

In the very first lines of the play the witches are on stage with thunder and lightning. They set the tone for all of the unnatural events that will happen throughout the rest of the play, and let the audience know that by stating that “fair is foul and foul is fair” (1.1.12). This means that nothing will happen the way that it is supposed to, rules will be broken, and everything will be hectic.

They even mention their connection to crazy weather when they talk about how when they meet it will be “In thunder, lightning, or in rain” (1.1.2) Later on in the play the witches show even more unnaturalness by conjuring characters that speak to Macbeth. As the apparitions appear, the stage directions say that it is thundering and lightning. Making apparitions rise out of a cauldron is undoubtedly an unnatural event, and that is why the weather is again chaotic.

Bad weather is also used as a sign that that there has been disruption of the chain of being. The chain of being is the idea of a kind of social pyramid where gods are at the top, then kings, then nobles, then middle class, and peasants at the bottom. This is supposed to be an undisturbed chain, but Macbeth is breaking the rules and disrupting it to try to improve his position. He is told by the weird sisters that he will become king, and he can not imagine how this would happen because the current king is alive and well. He soon realizes that the only way to become king is to kill the current king.

At first he is not brave enough to do it, but with his wife pressuring him to do it, he decides to. The morning after the murder, Lennox says: “The night has been unruly. Where we lay, / our chimneys were blown down… Some say the earth / was feverous and did shake.”(2.3.61). Lennox has not even heard of the murder yet but he could tell that the bad weather was a harbinger of chaos. He was right, because that night was the beginning of Macbeth’s rampage to destroy the chain of being.

Hectic weather is also used as a harbinger of disruption or attempted disruption of the chain of being. The witches prophesized that even though Macbeth was king, Banquo’s sons would take the throne after him. This greatly disturbed Macbeth because he didn’t want to go through the whole murder of Duncan so that Banquo’s sons could be kings. So his next step in disrupting the chain was to murder Banquo and Fleance.

Macbeth hires murders to go kill Banquo and Fleance, and right before the murderers show up, Banquo says: “It will be rain tonight.”(3.3.23). The murderers succeeded in the killing of Banquo, but Fleance escaped. Therefore Macbeth’s attempt to disrupt the chain of being had failed because Fleance would still take the throne after him. Because of Macbeth’s failure, it never rained that night.

Chaotic weather in Macbeth is clearly a sign of unnatural events and breaking in the chain of being. The witches, Macbeth’s murders, and the times when Macbeth was being given knowledge that he should not have had, were all marked with this type of weather. Shakespeare had obviously planned this and did a very good job of placing it throughout the play. 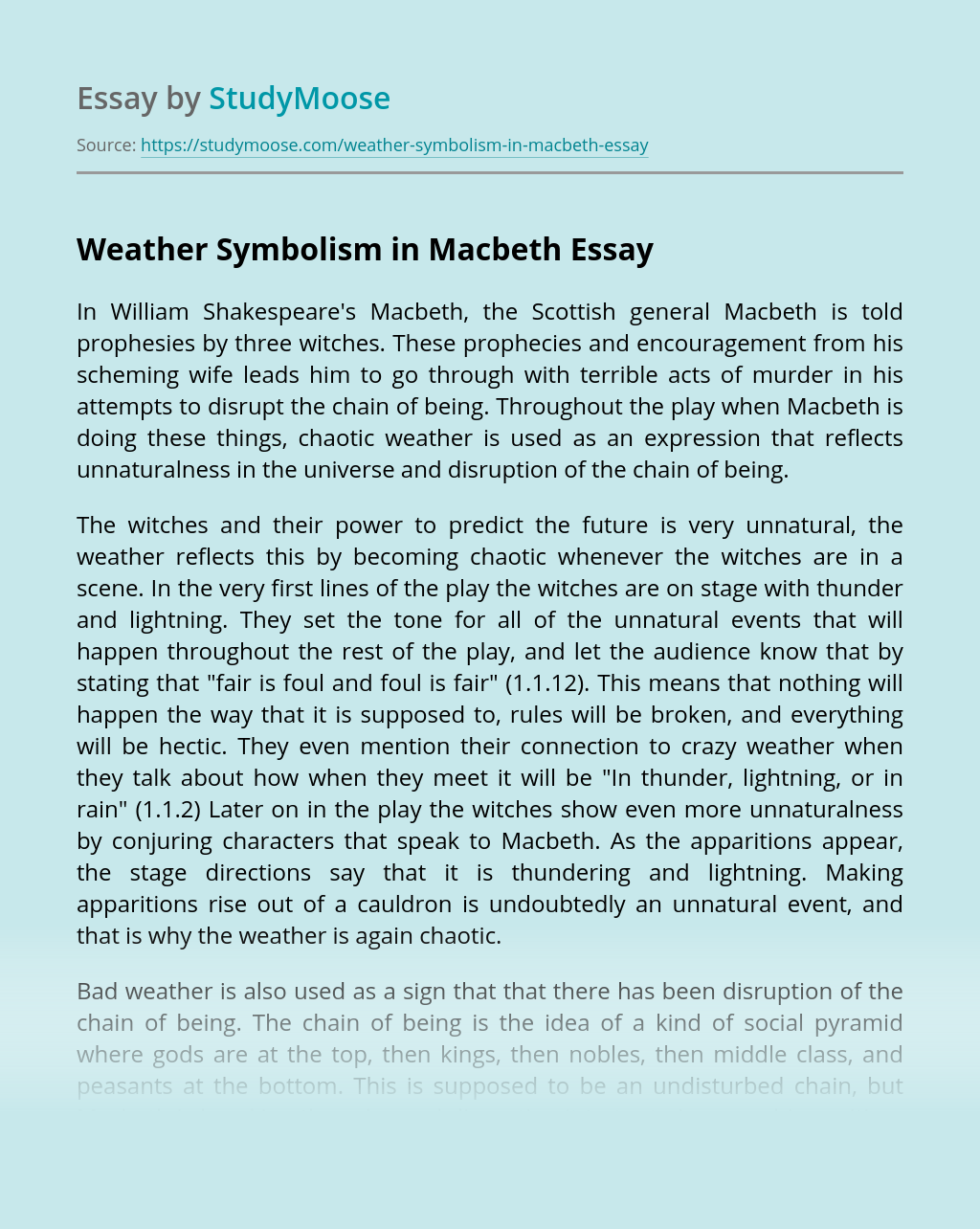