The weather controls every aspect of our daily lives. It influences our choices and decisions on what to wear, what to eat, and what kind of activities we should do. Ancient civilizations feared and respected the power of the weather. They created and worshiped different weather gods. During extreme weather conditions such as during dry seasons and floods, they used human sacrifices to appeal to the god of sun or to the god of the rain. Survival and biological necessity defined the relationship between men and the weather.

Turn in your highest-quality paper
Get a qualified writer to help you with
“ Weather and Mood ”
Get high-quality paper
NEW! AI matching with writer

Even with the advance of science and philosophy in the next civilizations, the study of weather was primary linked to a physiological and biological needs. Research studies with psychological approach were rare and often ignored because scientists and researchers did not believe in weather’s psychological effects on humans. According to the French philosopher Blaise Pascal, who strongly denied any correlation between weather and mood, ” the weather and my mood have little connection.

I have my foggy and my fine days within me; my prosperity and my misfortune has nothing to do with the matter” ( n d).

Thanks to the psychological revolution in 1950’s, more research studies have dedicated a lot of thought to this relationship between weather and mood. As a result of a special interest in this correlation between weather and mood, much research has been performed to demonstrate that weather has influence over people’s emotion and behavior. Keller et al.(2005) investigated the effect of temperature, pressure, and the time spent outside on the psychological processes.

Their research study demonstrated that sunny weather with high temperature and high pressure has a positive effect on the mood of participants who spent more than 30 minutes outside, but among participants who spent less than 30 minutes, higher temperature and pressure were associated with lower mood.( Keller et al., 2005). In a similar multidimensional experimental study, Howarth and Hoffman (1984) studied the impact of different weather variables such as humidity, temperature, and hours of sunshine on mood ( Howarth & Hoffman, 1984). They concluded that sunshine is associated with the mood of optimism, where as humidity and and low temperature were associated with the mood of anxiety, aggression, Depression, and low concentration (Howarth & Hoffman,1984).

In this study, we decided to broaden “our experimental laboratory” to include different states in the country with completely different climatic characteristics. Our research, which was a combination of correlation research and experimental study, was run in Alaska which is known for its bitter and cold weather, Arizona which is known for its heat waves that can reach 110 degrees Fahrenheit, and Florida which has a very pleasant weather with optimum temperature. Participants from Alaska and Arizona set up our experimental group, whereas participants from Florida set up our control group. We hypothesized that mood ( our independent variable) would dramatically decline as temperature (our dependent variable) drops below zero degree Fahrenheit ( positive correlation) or rises above 110 degree Fahrenheit ( negative correlation ) and would be boosted at an optimum temperature ( between 70 and 80 degrees Fahrenheit).

300 people were randomly selected to participate in the experiment ( 160 males and 140 females). They ranged in age from 18 to 35. subjects had no previous psychiatric disorder nor any serious health problems. We assigned 100 participants for each states ( Alaska, Florida, and Arizona). To ensure consistency, participants from each state were selected from the same demographic area with the same median household income ($45,000 was the average median household income) and with the same racial and ethnic characteristics (the majority was white Americans). Volunteers were not compensated for their participation in the research.

To collect our data, We set up surveys that rely only on emails. Participants answered questions related to their well- being, and state of mood. Each participant got a score that evaluated him/her as a low or high mood person. In our experimental group, subjects from Alaska took the survey during winter time when the temperature was between – 40 and – 60 degrees Fahrenheits and again in summer when the temperature was in the 70’s. Similarly, subject from Arizona were tested under extremely hot climate as well as during pleasant climate. In our control group, volunteers from Florida were also tested twice but during the same pleasant days when the optimum temperature was between 70 and 80 degrees Fahrenheit. We obtained data on temperature in the three different states from weather.com.

The survey consisted of 5 simple questions that participants were requested to answer honestly without knowing the involvement of weather. Subjects were asked to report what they had felt during the last seven days. The basic mood assessment that was asked to be completed by the participants was the following model :

-Rate your suicidal thought on a scale of 1 to 10

-Rate you sleeping patterns on a scale of 1 to 10

The results supported the hypothesis that very hot climate as well as extremely cold weather affect negatively our mood. Nice weather with an optimum temperature of 70 to 80 degrees Fahrenheit boosts our moral, makes us happy, and improves vitality.

The results not only do support the findings of previous studies, but also give us a better appreciation of one of the most effecting weather variables: the temperature. Keller et al.’s prediction and exclusive findings about the effect of weather on mood and cognition focused on the relationship between atmospheric pressure and temperature and cognition and memory ( Keller et al., 2005). Despite the fact that Howarth and Hoffman (1984) ran a multidimensional study in which several weather variables were included (such as precipitation, wind, humidity, temperature, barometric
pressure, and hours of sunshine), their findings demonstrated that temperature had the greatest effect on mood (Howarth & Hoffman, 1984).

Many limitations affected the outcome and the success of the research. Relying on random sampling and on the survey data to run our experiment did not allow us to look at the cases in more depth. Moreover, the wording used in the survey questions might have affected the survey results because the phrasing of some of the questions might have been interpreted differently among participants and subsequently affecting the way how they would report their behavior. The accuracy of the data depended tremendously on the honesty of the participants, a factor that we cannot verify or control. Horn-thorn effect could have affected the accuracy of our data as participants could alter their behavior or state of mood, simply because they were being studied.

Participants could have lied about their true emotions or mood. In addition, we couldn’t control the other confounding variables that might influence the independent variable ( mood) or the dependent variable ( temperature). It was very hard to eliminate other factors that might have affected the mood of the participants such as their psychological and social problems and it was hard to distinguish between positive mood or happiness and life satisfaction as a whole. Isolating temperature from other weather variables was also a big challenge. The interference of other weather factors such as clouds, wind, or barometric pressure could have affected the mood of the participants.

As we were running this experimental research, we adhered to the APA ethic codes and we respected all the ethical principles developed by APA and other international psychological organizations. Before taking the survey, we obtained participants’ informed consent and we made it clear that their information would stay confidential. No harm or discomfort was caused to the participants during or after the experiment. At the end of the experiment, participants were fully debriefed ( temperature and weather were not mentioned until debriefing to guarantee the success of the study).

The purpose of this research is to enrich previous studies on the effect of different weather variables on mood and cognition. Knowing that mood peaks at optimum temperature ( 70 to 80 degrees Fahrenheit) and declines with higher and lower temperature can primarily help psychologists to evaluate people who suffer from depression from a new perspectives.

A new “weather therapy” can be useful in treating people with psychiatric disorder such as depression and post-traumatic diseases. This study can also advance the field of industrial psychology by understanding the effect of high and low temperature on employees and productivity. Retail industry, as well, can benefit from the findings of this study. Predicting and understanding the behavior of their customers based on weather-mood correlation, retailers can adjust their sales analysis data to maximize profit or minimize losses. 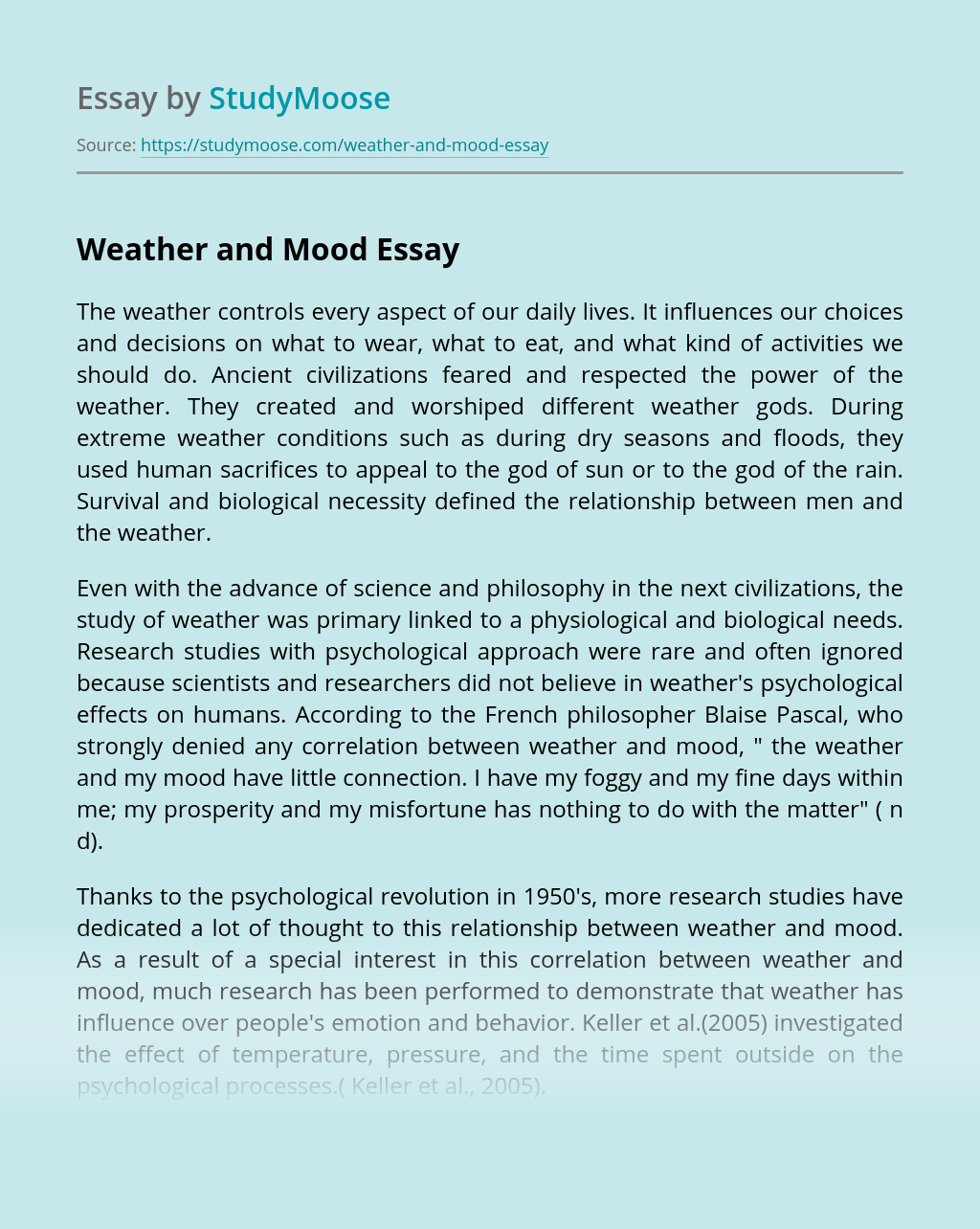 Turn in your highest-quality paper
Get a qualified writer to help you with
“ Weather and Mood ”
Get high-quality paper
Helping students since 2015
Stay Safe, Stay Original