Gwendolyn Brooks makes great use of rhyme throughout the poem. She uses words such as “cool”, “school”, “sin”, and “gin” (Brooks 684-685). These are rhymes that appear at the end of lines. The rhyme scheme used compliments the theme, since it is the directed to a young audience. It is known that Brooks is trying to attract a young crowd because she is talking about young people who are supposed to attend school. The poem has an up tempo beat, almost like a rap.

Don't use plagiarized sources. Get your custom essay on
“ We Real Cool ”
Get custom paper
NEW! smart matching with writer

This rap-like sound may also help to appeal young readers.

Devices But as if the rhyming weren’t enough, Brooks also uses alliteration, the repetition of a particular sound in the first syllables of a series of words or phrases, usually a consonant. “Lurk late. We” “Strike straight. We” (684) Sometimes the rhyming doesn’t even stop with the two end words: “Sing” “sin” “thin” “gin” (685). She also uses dialect, a black dialect.

This poem describes the lifestyle of young rebels.

They are “cool’ having left “school”, and “die soon.” The seven players in the poem were victims of self-destruction. Brooks makes the theme evident to the reader with the use of irony. The first line of the poem reads “We real cool” (684)and the last line read “We die soon” (685). So, in other words the pool players were too cool for their own good. Brooks expresses the way she feels about school drop outs in a short, yet forceful poem.

“We Real Cool” is very unique definitely has a powerful message behind it.

Gwendolyn Brooks illustrates the essence of troubled teenagers who will eventually suffer the ill-fated possibility that life will render a human being if they continue the lifestyle of the streets — “Die soon”. The poem was written in 1950 (685) during the struggle for African-American civil rights messages and, to appeal to young African Americans of the time. It expresses the problems and also the dangers which affected the young African-American community; and it serves as a way to help the youth realize the ways of their problems and change themselves for their own good and the good of the community. 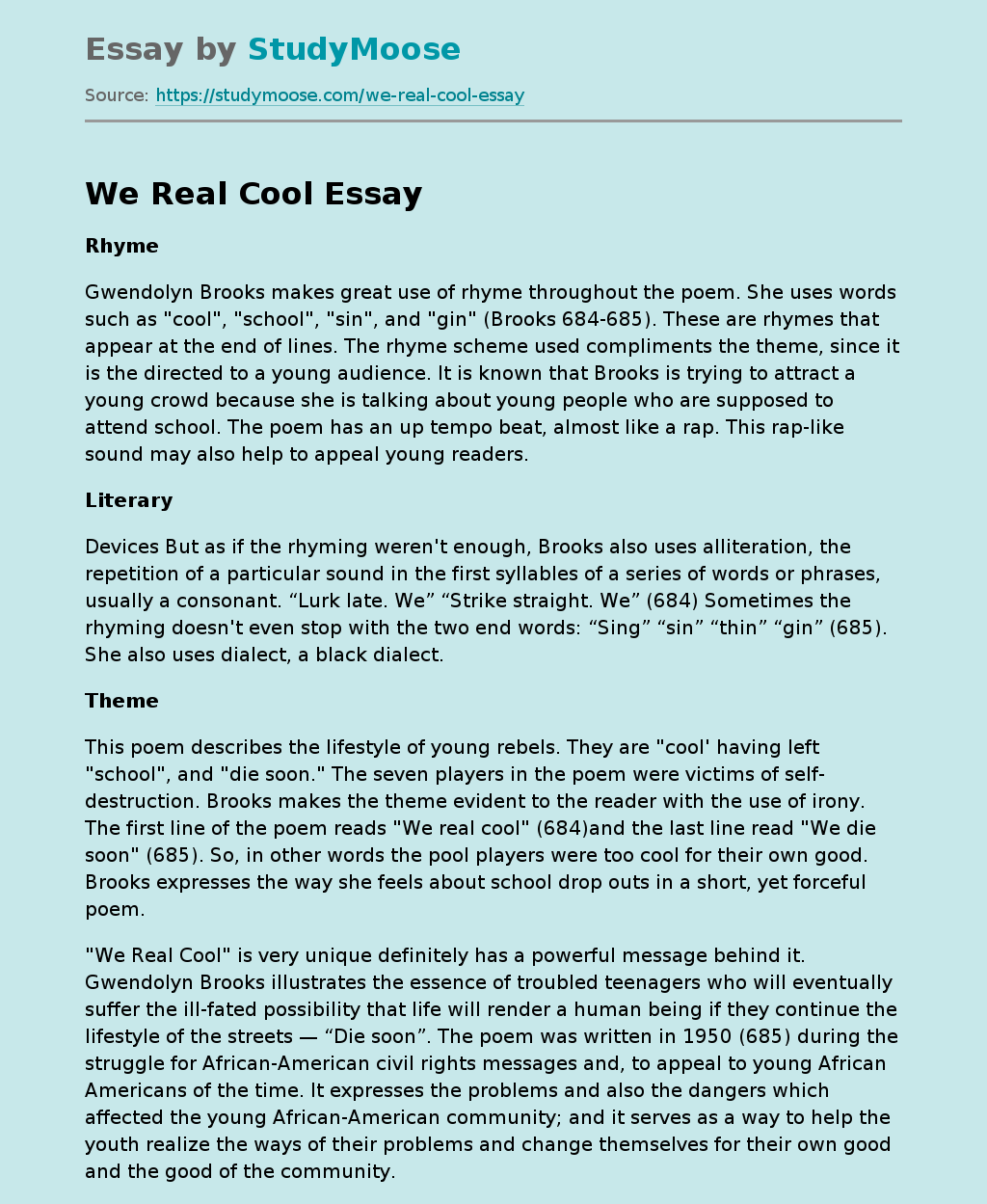