We Live in an Unheroic Age

Ladies and Gentlemen, I am here today to convince you that we do not live in an unheroic age. It is clear to me that whether we like it or not, and we can deny it all we want, there will always be heroes in some shape or form. I hope that by the end of this speech, I will have convinced all present of this reality. What qualities should a hero have? Should they be big or small, strong or weak, good looking or ugly, male or female? Well I guess that depends.

Don't use plagiarized sources. Get your custom essay on
“ We Live in an Unheroic Age ”
Get custom paper
NEW! smart matching with writer

Because everybody’s ideal hero is different. Everybody’s hero is heroic in a different way. There is no common denominator in every hero. Except one. To inspire.

Is that not what a hero should do? Inspire those who look up to them? Be a role model? Encourage people to follow their dreams? Show an example, in order to instil a sense of ‘I can do it’ in their followers? I believe they should.

Over the years, there have been countless heroes who have inspired others to be better in some way, shape or form. There are thousands of examples. Open a newspaper and you’ll find some heart-warming tale of joy. I opened the local newspaper ina small Scottish town last summer, to see the headline: ‘Pink Donates 10k to Save Cancer Child’s Life’. It turned out that Pink, the singing superstar, had donated ten thousand pounds to a young Scottish girl who had cancer.

The money paid for the operation that saved her life.

Read more: A total number of words in the harry potter series.

The Irish actress Evanna lynch played the role of Luna Lovegood in the Harry Potter movies. As a child, Lynch was severely anorexic. She was struggling to beat the disease, her only distraction being reading and re-reading Harry Potter novels. One day, she decided to write to JK Rowling. She explained how she had a debilitating illness, how she was a huge fan of the Harry potter novels and how she idolised Rowling. To her surprise, rowling replied. Over the course of a few months, they exchanged letters. Lynch found a friend in the most unlikely of shapes. Eventually, the young Irishwoman built up the courage to ask Rowling if she could possibly get a part in a Hrry Potter movie.

The answer was obvious. There was no way an anorexic ghirl with no acting experience could be cast in such a world-renowned movie series. But Rowling didn’t stop at saying no. She explained to Lynch that in order to earn a part, she would have to beat anorexia. Rowling told her not to view it as something that could hurt her, but more as a challenge, an obstacle she had to overcome. Sure enough, Lynch beat the disease and after a highly successful audition at an open casting call, she was cast as Luna Lovegood.

There are, of course, countless other instances of heroism. The 2012 London Olympics was based on creating a legacy and inspiring a generation. Rob Heffernan of Ireland came fourth in the fifty kilometre walk at the olympics, went away and trained hard. The next summer, he won gold in Moscow at the World Championships. That’s an inspiring story. I think it is fair to say that the term ‘hero’ has been watered down. It no longer has the same meaning as it once did. However, I believe that in this day and age, a hero is someone who inspires, who spurs another on. Whether that’s to become a world-renowned champion or to wreak devestation and havoc, like Adolf Hitler inspired David Copeland. David Copeland is an English Neo-Nazi militant who became known as the “London Nail Bomber” after a thirteen day bombing campaign in April 1999 aimed at London’s black, South Asian and gay communities that resulted in three people killed and more than a hundred injured.

Copeland’s first attack, on Saturday, 17 April 1999, was in Electric Avenue, Brixton. He made his bomb using explosives from fireworks, taping it inside a sports bag before priming it and leaving it at Brixton Market. The Brixton Market traders became suspicious, and one of them moved the bag to a less crowded area, two further moves of the bomb occurred by unconvinced traders, including the bomb being removed from the bag, which is when it ended up at the Iceland supermarket. It detonated just as the police arrived, at twenty-five past five in the evening. Forty eight people were injured, many of them seriously because of the four-inch nails Copeland had packed around the bomb. One twenty three month old toddler had a nail driven through his skull into his brain. His second bomb, on the following Saturday, 24 April, was aimed at Brick Lane, the centre of the Bengali area in the east end of London. There is a famous street market on Sundays, but Copeland mistakenly tried to plant the bomb on Saturday when the street was less busy. Unwilling to change the timer on the bomb, he left it instead in a black Reebok bag on Hanbury Street.

There it was picked up by a man, who brought it to the police station on Brick Lane, which was shut. He had placed it in the boot of his car which was parked outside number 42 Brick Lane, where it exploded. Thirteen people were injured, but there were no fatalities. The third and final bomb was planted and detonated on the evening of Friday, 30 April at the Admiral Duncan pub in Old Compton Street, the centre of London’s gay village. The pub and street outside were very crowded because the evening was the start of a Bank Holiday weekend. Andrea Dykes, a twenty-seven year old, four months pregnant with her first child, died along with her friends and hosts for the evening, Nick Moore and John Light, who was to be the baby’s godfather. Andrea’s husband, Julian, was seriously injured.

The four friends from Essex had met up in the Admiral Duncan to celebrate Andrea’s pregnancy, when the bomb exploded after being taped inside a sports bag and left near the bar. Seventy-nine people were injured, many of them seriously. Four of the survivors had to have limbs amputated. This devestating attack did not come about of Copeland’s own accord. He was inspired by Adolf Hitler to target those he didn’t like and ethnic minority groups. If a hero is indeed one who inspires, does that not make Adolf Hitler a hero as well? The point I am making here, is that whether we like it or not (and we can deny it all we want), there will always be heroes in some shape or form because there will always been someone who has been inspired by another. One just has to hope that said inspiration is for the better, like Evanna Lynch, and not the worse, like David Copeland.

We Live in an Unheroic Age. (2016, Sep 17). Retrieved from https://studymoose.com/we-live-in-an-unheroic-age-essay 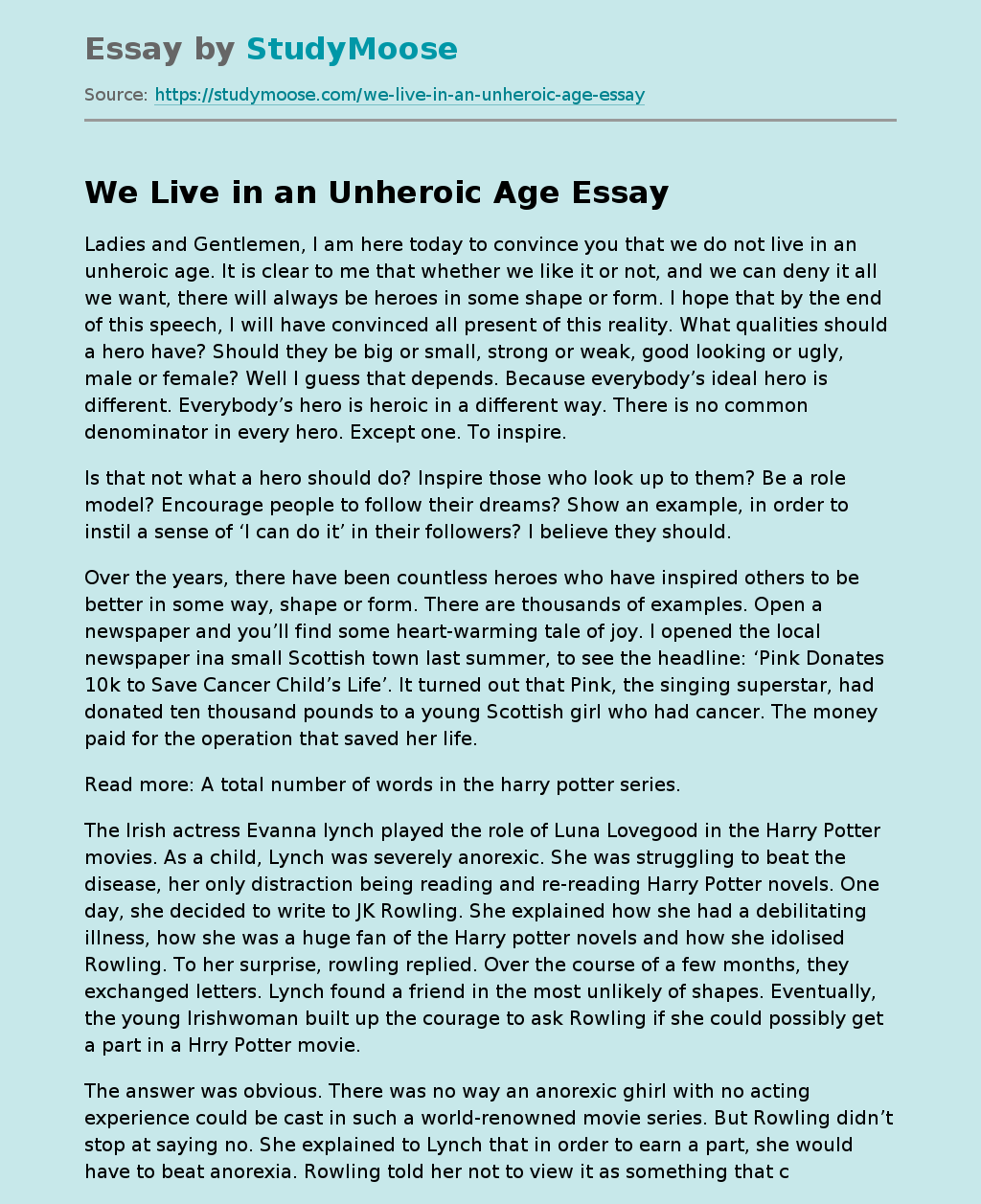