Wating for a Superman Stylistic Review

In David Gugenheim’s compelling documentary Waiting for a Superman the current state of America’s educational system is examined thoroughly. The educational system is clearly broken in many ways; the film not only examines the many areas and implications present in the educational system but also give an insight into the hardships families can face with education. Through an excellent use of personal interviews, frightening statistics and well-focused transitions the film makes it shockingly clear that American educational programs are flawed and a drastic change is needed for improvement.

Don't use plagiarized sources. Get your custom essay on
“ Wating for a Superman Stylistic Review ”
Get custom paper
NEW! smart matching with writer

The film begins with Geoffrey Canada recalling a childhood memory, “One of the saddest days of my life was when my mother told me ‘Superman’ did not exist. She thought I was crying because it’s like Santa Claus is not real. I was crying because no one was coming with enough power to save us”, this quote quickly sets the tone for the rest of the documentary. The documentary touches on many points; it alternates from interviews of students and their families, then gives a quick look into the state of education, and finally elaborates on key problems in education.

The beginning scene is just one of many touching interviews used throughout the film. The film’s use of interviews gives the audience an emotional attachment to the struggles of students and their families; it also gives the viewer an insight into how the problems of education affect people’s lives. One great example of how the film illustrates the need of educational reform through interviews is when the documentary shows a young single woman traveling great distances to look at potential charter schools for her daughter.

The young mother spends a great portion of her day looking for better education for her daughter, but the only option available to her is a lottery in a charter school. In this lottery the opposition is hundreds of other students and failure means her daughter will be forced to go to one of the worst schools in the state. Many of the failing public schools in cities are not paths to success but instead a fast-track to failure. The emotional distress the mother presents shows just how bad education is in her nearby area and by displaying this woman’s struggle in the form of an interview, the audience is more involved in her journey.

This statistical example shows how effective teachers unions are at keeping teachers jobs but the teachers union also impede almost any change at all in education. One of the strongest areas that drives the documentary forward and portray it’s message effectively is the transition between scenes. The film is almost formulaic at times; a personal interview will often hint at a topic then the film moves into an elaborate explanation of the topic.

The transitions not only move the plot and message forward but also keep the audience interested and involved. One excellent example of this is when the film shows three separate families waiting on results to charter schools. The film shifts between family to family as the names of admission are slowly revealed, this builds a mounting tension and quite an emotional response once the admission statuses are revealed. Waiting for a Superman paints an elaborate picture of the changes in education during the last three decades.

This film makes it quite clear that education isn’t functioning properly in this country but it also shows new approaches to education and developing ideas. The educational system may be flawed but it is true that at one time America’s education was the best in the world. American citizens should recognize this issue and unify to address this problem; that is why I would recommend this documentary to anyone. The message in this film should be spread to everyone. In order to fix a problem of this size a huge collaborative effort must be made or nothing will change.

Wating for a Superman Stylistic Review. (2017, Jan 02). Retrieved from http://studymoose.com/wating-for-a-superman-stylistic-review-essay 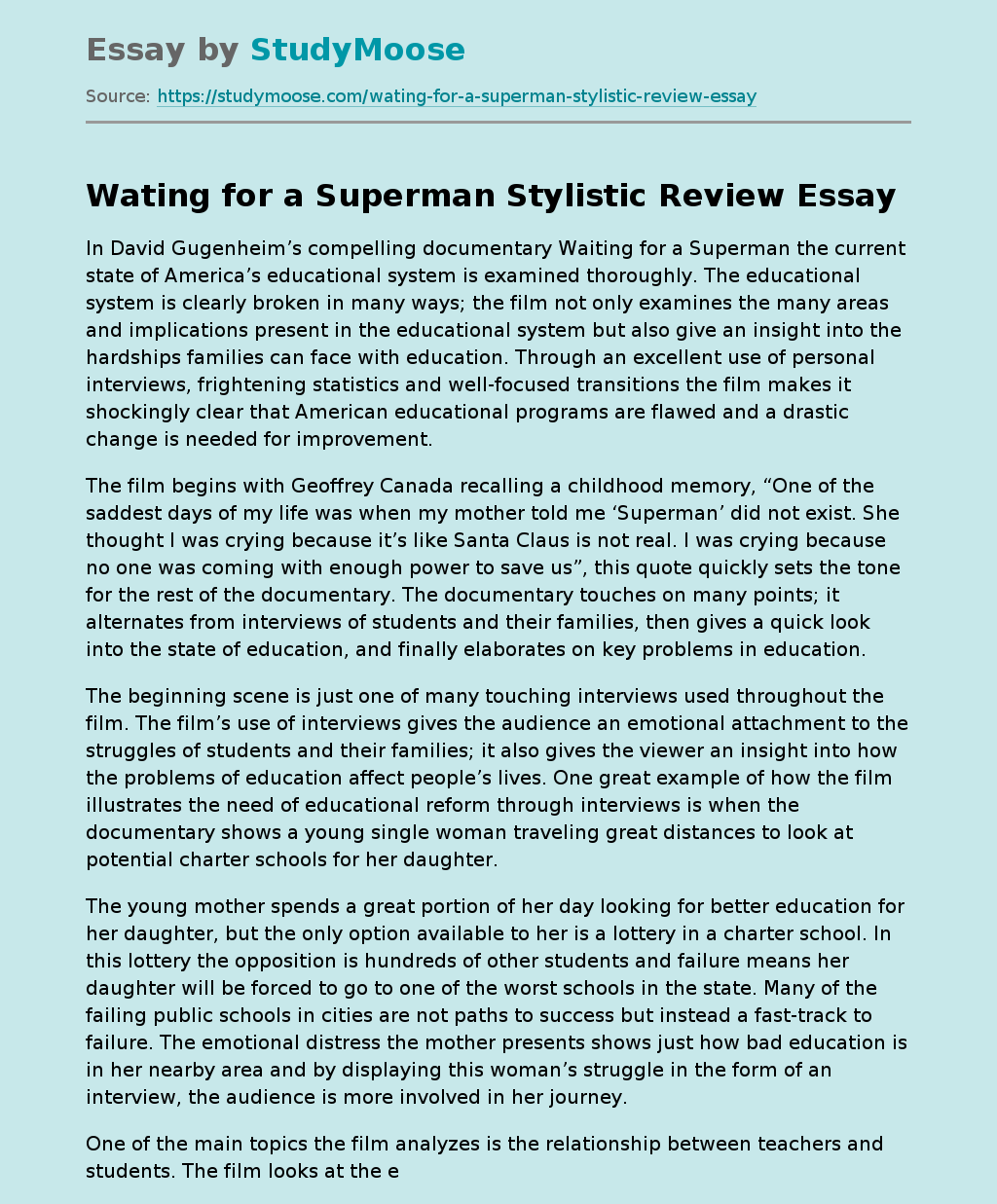