Water is the one thing we all drink

It’s something we all need to keep us hydrated, alive, and well. But, with water as a mixture with tea and coffee, it makes a wonderful stimulant. Coffee and tea are very popular all around the globe since everyone needs to start their day off right with just a little boost. Tea and coffee have many similarities with each other and both are very beneficial in their own way, but they differ by their various health benefits.

While tea and coffee have similar health benefits by lowering risks of heart disease, type 2 diabetes, and Parkinson’s disease, they also have many differences.

Don't use plagiarized sources. Get your custom essay on
“ Water is the one thing we all drink ”
Get custom paper
NEW! smart matching with writer

Tea contains a substance called antioxidants. Antioxidants are compounds produced in your body to help fight against free radicals, which are unstable atoms that can cause illnesses and aging. Coffee also contains antioxidants but not as much as tea unfortunately. On the upside, research says that coffee lowers the risk of getting depression and intrusive thoughts. Tea can relieve stress and can help with insomnia for those who suffer with anxiety and sleeplessness.

Coffee on the other hand will keep you concentrated, boost your energy levels, and physical performance. Coffee is an energizer; when one is extremely fatigued and didn’t get enough sleep, they’ll pour a hot cup of coffee and it’ll keep the body awake and fully relaxed. Tea is a loosener, it will help with reducing stress and sickness, it will boost your mood with the aroma of it.

Tea and coffee originated in many different countries and developed in different time periods.

Tea originated in the 2737 BC, found in China, India, and Myanmar. Coffee originated in 9th Century AD and found in Ethiopia. The history of tea and coffee are both mishaps that changed the world. A Chinese ruler named Shen Nong, discovered a leaf in his boiling water then realized that it had a wonderful flavor from it. He soon began to put more leaves into his boiling water. It spread throughout China and is the largest consumer of tea currently. Turkey, the United Kingdom, and Ireland are very popular with tea as well. The history of coffee was discovered much later after tea, it is believed it was first discovered near the Red Sea at Arabia in 674 A.D. A Yemeni shepherd named Kaldi noticed that his sheep was acting energetic after eating an unknown berry from a tree. He decided to try one of the berries as well and later was very hyperactive. He told this to one of his scholars about his discovery of this berry and how it keeps you awake. The scholar soon made a tea out of it and thus, coffee was born.

The preparation of the tea is steeped, coffee is brewed. Once coffee beans are ripe and ready to be picked, it will be dried so it can be brewed and roasted in different temperatures and methods for flavors. Coffee is brewed by drip or immersion. It can also be brewed in a variety of machines, filters, grinds, and containers to get the different kinds of flavors. People can add cr?me of different flavors or plain milk to coffee. It can be added with sugar or honey with it as well. Although, if you add too much of a flavored cr?me and sugar, it can raise the risks of having higher cholesterol levels. Tea plants come from a plant called Camellia sinesis and is transformed into dried leaves so it can be steeped. Tea usually comes in little bags so it can be dipped into hot water. Depending on the amount of tea, the teabag can be steeped in the water for about 4-5 minutes. If it’s left steeping for more than 5 minutes, the tea will not have that perfect amount of flavor. It can be added with milk, sugar, honey, or lemon. Everyone has their preferences though.

Both coffee and tea have healthy benefits for the body in various ways. Some people could either drink coffee or tea depending on how their body reacts and how they personally react to the high and low levels of caffeine. At the end of the day, coffee and teas have different tastes and flavors. It could be added with cr?me, milk, sugar, honey, lemon. When drinking either beverage, it’ll most likely benefit you with a long and healthy life.

Water is the one thing we all drink. (2019, Nov 28). Retrieved from https://studymoose.com/water-is-the-one-thing-we-all-drink-essay 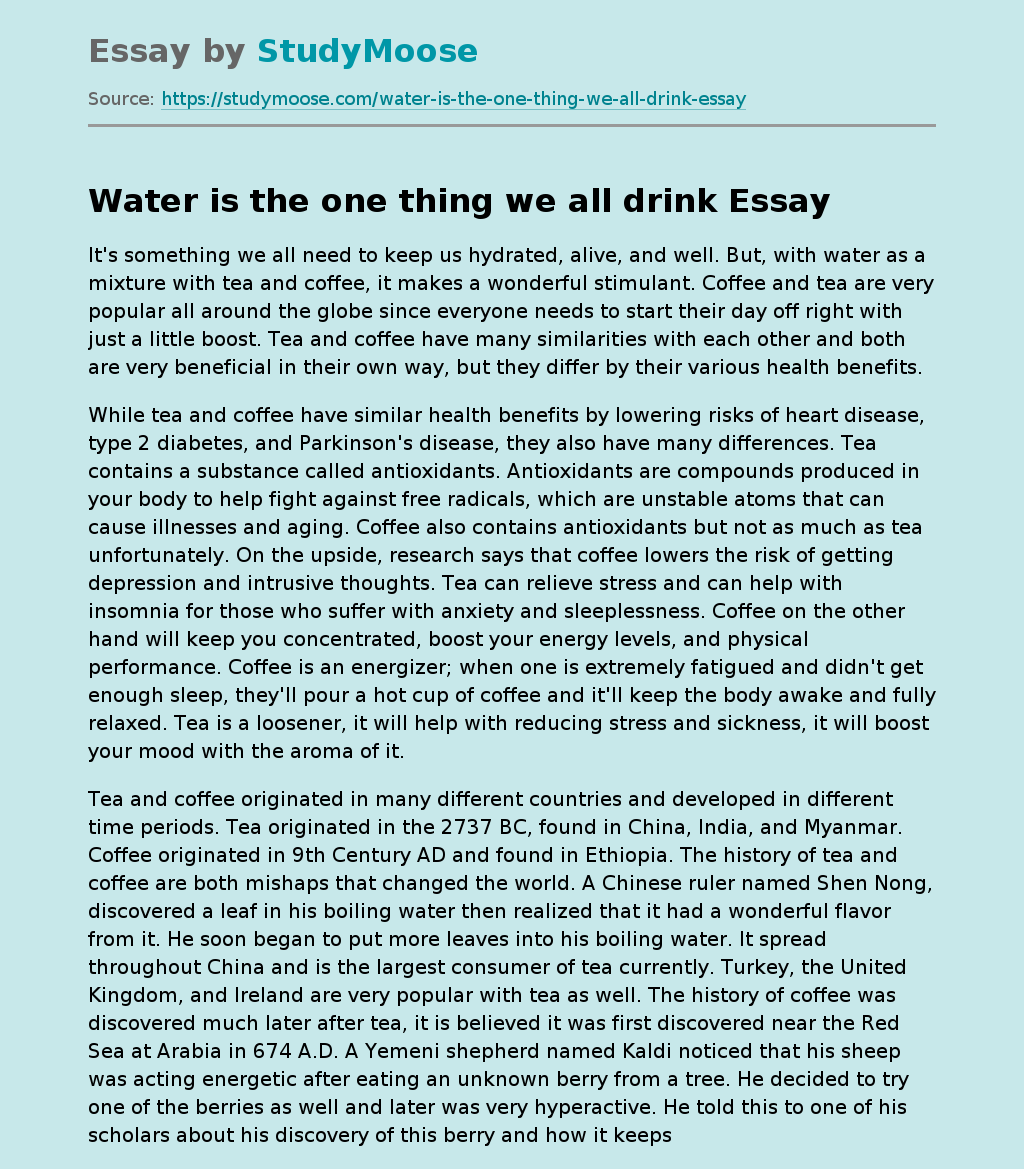