A discussion of why the Chicago Bulls are so good

Two weeks ago, I was home watching a Chicago Bulls game. I started to analyze why the team had the best record in the league. About nine years ago, the Chicago Bulls selected Michael Jordan in the third pick of the college draft from North Carolina. A few years later, the Bulls drafted Scottie Pippen from Central Arkansas State and just recently acquired Dennis Rodman from the San Antonio Spurs. After my diagnosis, I concluded that the Bulls have the three key elements to win the championship in 1996.

The Bulls have Scottie Pippen the floor general, Michael Jordan the leader, and Dennis Rodman the rebounder.

The Bull’s floor general is Scottie Pippen, a player who has control over everything that happens on the floor. Scottie Pippen is one of the most versatile and talented player in basketball. He can pass like a guard, rebound like a power forward, score like a shooting guard, and run and jump like few others.

The floor general is very important to the team because when the team is down by two the floor general will always make the basket to pull the team ahead. He also keeps the team focused and helps bring the younger players around. The leader is Michael Jordan, a player who everyone knows. Michael Jordan is the most recognizable athlete in the world. He is not only the top player of his era but is quite possible the best player ever to wear the uniform of an NBA team.

What amazes me about Michael is he was not good in college. He worked harder then any other player to become great, and his career stats prove that fact. Michael walks on the court and leads by example. Ninety percent of the time, Jordan will prevail. Read also Is Michael Jordan an entrepreneur

Without a leader, the team would not endure the playoffs. The rebounder is Dennis Rodman, a player who takes his job seriously. He is a very popular player around the league. Dennis is known for his multiple tattoos and colorful hair styles. He is also very flamboyant and a loud mouth: nevertheless, the team could not win without him. The rebounder must take on two roles that nobody wants. He must intimidate the opponent and get a technical foul every game. The head coach of the Chicago Bulls must be a lucky person. If I had to coach a team as good as the Chicago Bulls, it would be a very easy job with the talent they have on the team. The most important thing about these three players is their love for the game. There are other good teams in the league, and they all have the same type of players floor general, leader, and rebounder. The whole team plays an eminent role in every game. However, the floor general, the leader, and the rebounder must carry the team to the championship. 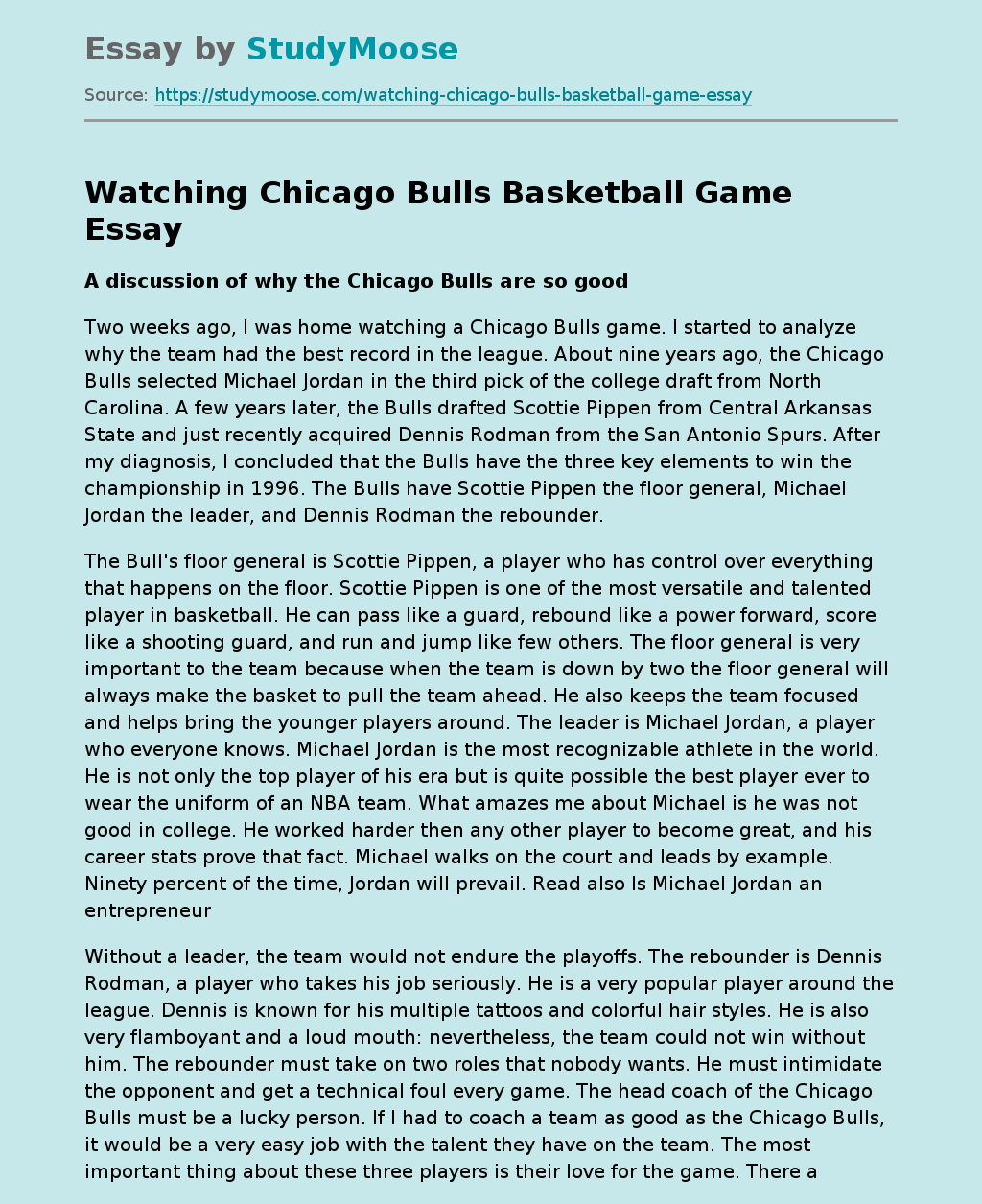