Was giving eighteen-year-olds the right to vote a mistake? Discuss

Was giving eighteen-year-olds the right to vote a mistake? Discuss. I believe that for the time period, it was not a mistake to give eighteen-year-olds the right to vote. However, I do not believe that the succeeding generations deserve that right. If it was possible to change the voting age back to 21 with a clause allowing younger military, students and political party members to vote that would be ideal in my opinion. In 1971 the voting age was dropped to 18. This decision came about during the tremendous loss from the Vietnam War.

Don't use plagiarized sources. Get your custom essay on
“ Was giving eighteen-year-olds the right to vote a mistake? Discuss ”
Get custom paper
NEW! smart matching with writer

Just thirty years earlier the draft age was lowered to 18.

Within that time, American youth were drafted in the many battles of World War II and the Cold War. Vietnam was the straw that broke the camel’s back for the youth of America. After all, if an eighteen-year-old was mature enough to fight and die for America, why were they not allowed to participate in voting for their leader? The sad reality is, since 1972 participation from voters between 18 and 21 has been on a decline.

It’s in the nature of the American teenager to take for granted the progress made by their preceding generation. I was appalled during this most recent election to hear young adults brag about writing in Mickey Mouse for president. Countless teenagers, posting on their social networks, complained about how annoying election season is. They threatened to remove anyone who tried to express the importance of voting.

The majority of the present 18 to 21 year old Americans seem to be ignorant at worst and apathetic at best.

Let’s say we take the above mentioned gag voters out of the equation and just focus on the ones who vote for legitimate candidates. As much as eighteen-year-olds like to think they do have their own opinions, I would say most people at that age have not developed their own opinions. If they don’t still believe what their parents taught them, simply because their parents were the ones teaching them that, then they intentionally and rebelliously believe the opposite. That still does not make it their own opinion. The way that our society is set up, with grade school and children living at home for so long, we don’t encourage independence and freethinking. The majority simply doesn’t have the life experience needed to form their own opinions. Time and time again, I am surprised to see the amount of potential voters who are not aware of the facts.

This is something that you see in all age groups, but I believe that it is more so a new voter’s responsibility to research the political parties and candidates before becoming set in their ways. I personally lean toward the third party candidates. I strongly believe that most people would agree with them too if they didn’t have their minds made up that the third party is a waste of time just because the media only plugs the two main parties. Regardless of my political opinion, the fact still stands true that with every new generation we have a chance to start fresh. If the youth earnestly took on the responsibility of voting we could make the change that we are always complaining about. I just don’t believe they are ready yet.

Was giving eighteen-year-olds the right to vote a mistake? Discuss. (2016, May 10). Retrieved from https://studymoose.com/was-giving-eighteen-year-olds-the-right-to-vote-a-mistake-discuss-essay 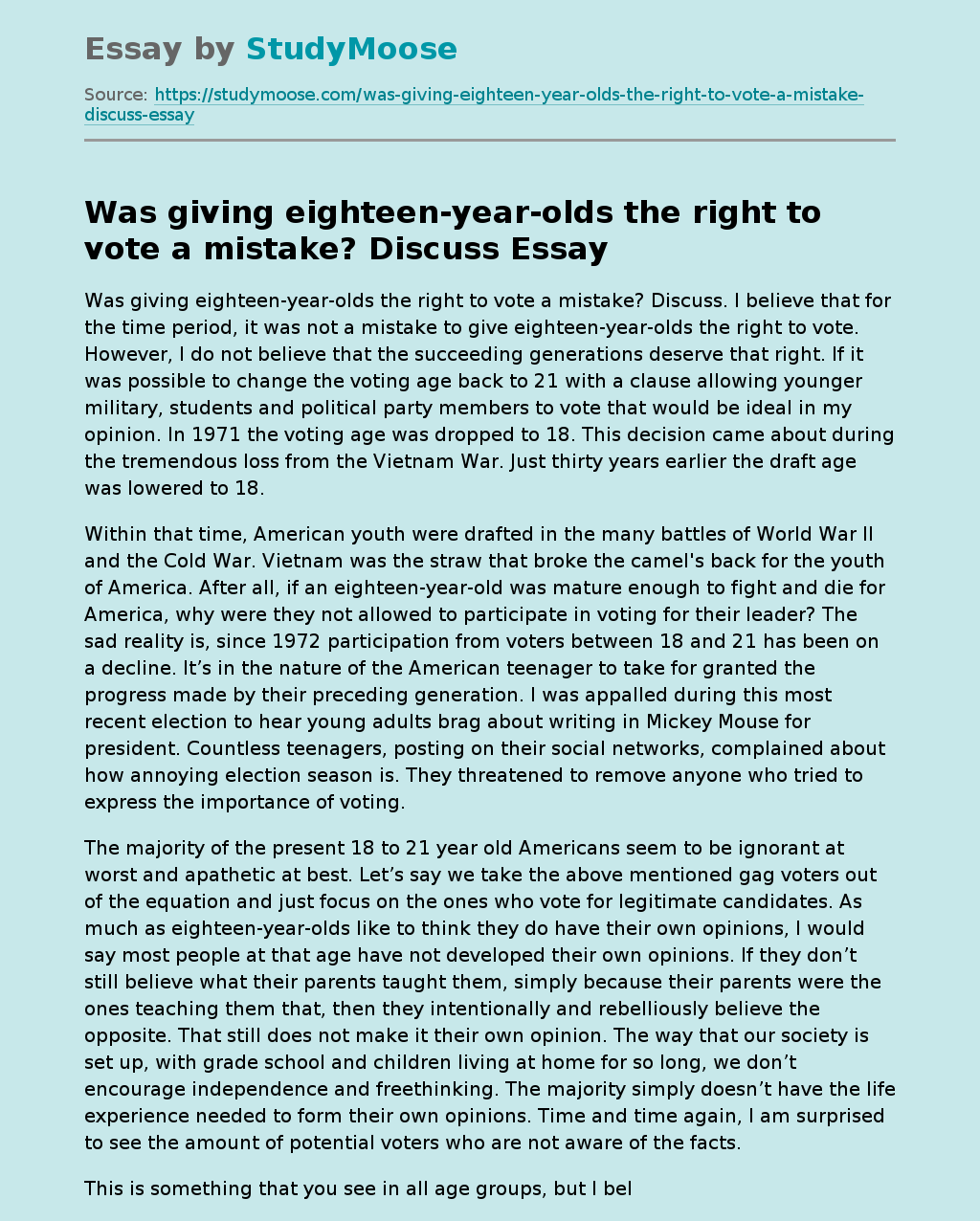