Sharon Olds "The One Girl at the Boys Party" Essay

In a poem of reminiscent adolescence, Sharon Olds defines a young girl who has the capacity to judge adolescent emotion with the benefit of time, for she is now a mother herself. This definitive view of adolescent values and thought is mingled with the mystery of symbolic mathematics, which represents a maturity of this thought and a colorful insight into the development of a young girl as she becomes a woman. This poem also accentuates the mystery associated with the minds of the female gender, and the strength of the adolescent, whose mother recounts a vicarious experience that seems to stand a landmark in the social and sexual development of a young female.

Don't use plagiarized sources.
Get Your Custom Essay on Sharon Olds “The One Girl at the Boys Party” Just from $13,9/Page

This poem starts in the boast: “When I take my girl to the swimming party…,” continuing with the first juxtaposition of male with female genders, for the boys “tower and bristle,” suggesting something naturally intimidating is inherent to the male gender. This is followed by the description of the girl, who is “smooth and sleek,” an alliteration that denotes the use of diction, for the contrasted descriptions also have a set syllable pattern: the description of the boys uses two syllables per word in order to create a harsh, rough connotation, and the girl’s description flows smoothly in each of the single syllable words.

The next description incorporates the first usage of the mathematical metaphor/symbol, and contrasts the previous description of the girl, for her body is “hard and indivisible as a prime number,” adding a independent nature to the character of the girl, and strengthening her role as a strong and feminist model for the beginning of adolescent maturity.

The continuation of line seven models the boys as merely a supporting role for the maturation of this young girl in an adolescent setting. The location of the poem is a swimming pool, the fancy of many children whose ambitions change from swimming to scouting the opposite sex. The addition of mathematics (pardon the pun) to this setting entails the change of mindset from innocent play to infatuation. The major shift follows: “…she’ll subtract her height from ten feet, divide it into hundreds of gallons of water, the number bouncing in her mind like molecules of chlorine in the bright blue pool.” The use of mathematics also accomplishes a look into the “mysterious” nature of adult thought, signaling the onset of the mother’s experience as represented in her account of the poolside affair.

The final portion of the poem serves to strengthen the concept of feminism and the strength of the female race, while again utilizing mathematical expressions to signify the oneness of the young girl with her body: “…she will see their eyes, two each, their legs, two each, and the curves of their sexes, one each…she will be doing her wild multiplying, as the drops sparkle and fall to the power of a thousand from her body.” This “wild multiplying” serves as a hyperbole and a symbol for the thoughts now associated with the opposite sex, those mysterious thoughts that cannot be penetrated by the mind of a young boy.

Sharon Olds creates a poem that marks a realistic situation of maturity, and a universal example of the biological and social change as develops during the years of innocence and discovery. This flight from the conventional representation of a call to maturity is unique to Olds’ style, whose feministic predilections shape her poetry into a brochure for the masses of women everywhere. Her mindful detail in respect to diction and metaphor create a poem that fosters the imagination, and a vicarious acceptance of those scenarios in which our whole world seems to fall to change.

Sharon Olds "The One Girl at the Boys Party". (2016, Jun 20). Retrieved from https://studymoose.com/sharon-olds-the-one-girl-at-the-boys-party-essay 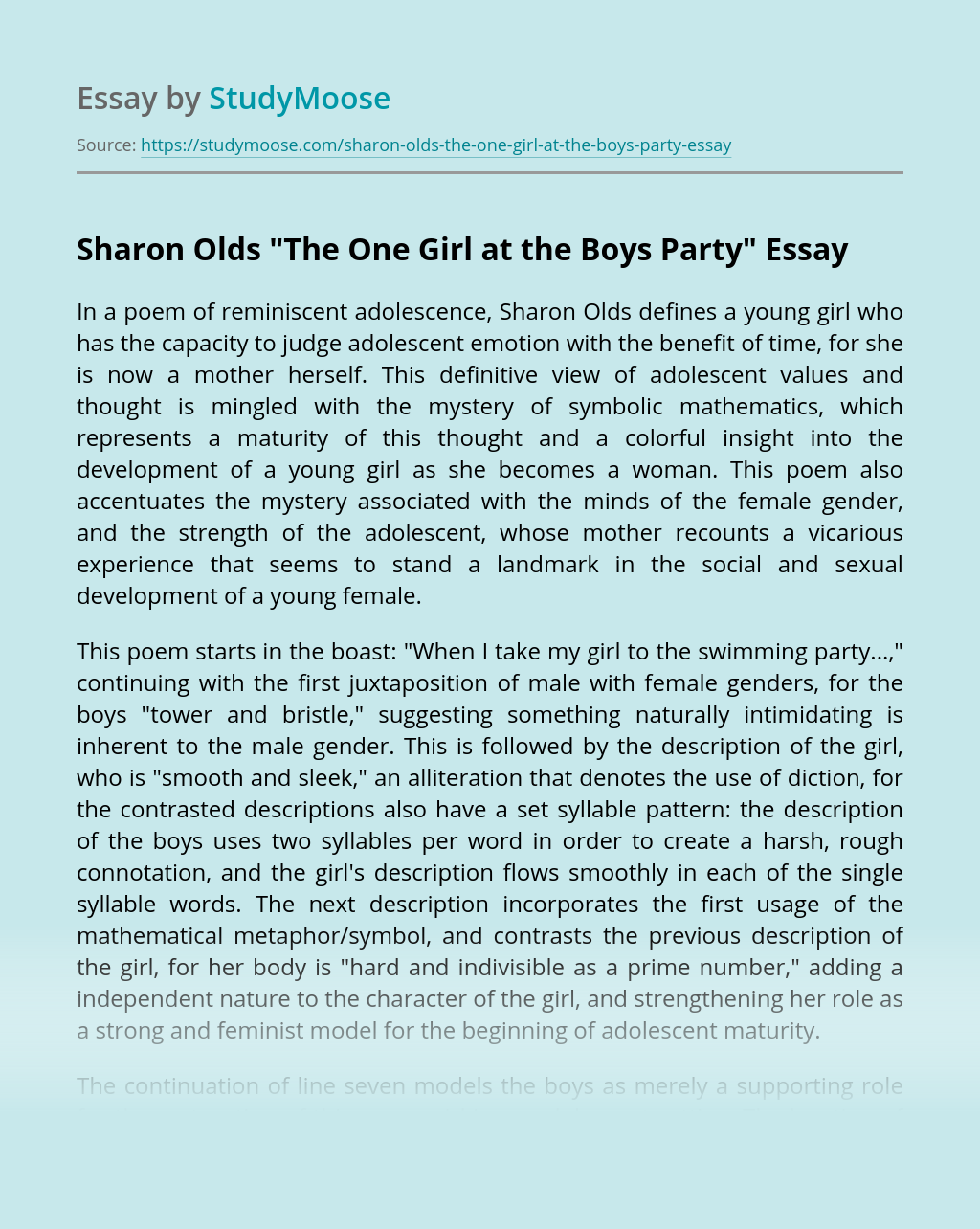 Pros and Cons of Computers in Kindergarten

Wal-Mart is no doubt the biggest retail store in North America. It is considered to be the most efficiently run retail business in the world. Wal-Mart compared to luxury retailers have a lot of contrasting factors both in goods and services provided. The most significant factor that I see when one is to compare Wal-Mart... VIEW ESSAY

“The message is more important than the style”. I totally disagree with this statement in the context of Things Fall Apart as I believe that in this particular work, the message is of equivalent importance to the style; to have a particular writing style whose sole purpose is found in informing readers as to the... VIEW ESSAY

The Dark Age of Greece describes a duration of time where all knowledge of Mycenae construction, painting, sculpture, reading and composing disintegrated due to Dorian invasion. One type of art that continued through the duration of the Mycenaean failure was the art of pottery. Pottery, more specifically vase painting, was the beginning of an illustrative... VIEW ESSAY

Chiefly, President Truman’s actions were more effective in beginning the Korean War to an end. First of all, when North Korea surprisingly swept forces across the 38th parallel on South Korea on June 25, 1950 led to conflict to Korean War. After that the United Nations immediately condemned North Korea while President truman and his... VIEW ESSAY