‘George was wrong to shoot Lennie’ How far do you agree? Support your ideas with details from the novel.

‘Of Mice and Men’ is a novel written by John Steinbeck that was first published in 1937. Steinbeck has a very particular style of writing. He manages to provoke a deep emotion in the reader about one circumstance, for instance the killing of Candy’s dog, and then arguably less of a reaction about a considerably more tragic occurrence, the death of Lennie.

Don't use plagiarized sources.
Get Your Custom Essay on Was George wrong to kill Lennie Just from $13,9/Page

This makes us question what’s valuable and puzzles the reader as to where their morals lie. The question of ‘was George wrong to shoot Lennie?’ is therefore a difficult and controversial one.

My personal opinion is mixed. I largely disagree with the title of this essay and believe that George did the right thing, but I can also see the opposing arguments. It is simplistic to say that George has committed a crime and therefore is wrong, but one cannot always take a legal argument to deal with a moral situation.

Throughout the book, it becomes apparent that Steinbeck does not make judgments. Instead he uses small physical details to evoke emotions. He cleverly leads the reader towards a conclusion without them even knowing it. This makes it very difficult for the reader to create a clear opinion.

My first reason for believing that George did the right thing is to speculate on what may have happened if he had not killed Lennie. Curley didn’t hold much affection for his wife, and from the moment he’s introduced in the book, its clear he is against Lennie. He has always been bitter about his size and strength and ever since Lennie crushed his hand he has been waiting for some excuse to get him back. ‘I’ll kill the big son-of-a-bitch myself. I’ll shoot ‘im in the guts.’ If George had not mercifully killed Lennie in the most painless way possible, he would have been brutally killed by Curley in revenge for his wife’s murder.

Lennie got the closest any of them ever could to the dream of having their own place. ‘Look across the river, Lennie, an’ I’ll tell you so you can almost see it’. His dream was all he lived for, he died happy. Lennie could have been sent away and locked up if Curley hadn’t killed him first. But taking in mind his mental situation he would never have coped alone. George cares about Lennie, he is all he’s got. ‘I got you and you got me’. George did the best thing he could for Lennie, and the hardest thing for himself.

George and Lennie have a very close relationship. Their lives have been shaped by their friendship and they rely strongly on each other. Therefore, naturally George understands that if he had not killed Lennie, then sooner rather than later someone would. Throughout the book you can see the escalation of Lennie’s actions. It all starts with him wanting to touch a girl’s dress, which then progresses from the killing of a dog to Curley’s wife. Lennie has the mentality of a child, unable to take responsibility for his actions or even comprehend what the consequences may be. ‘Why did you got to get killed. I didn’t bounce you hard.’ He doesn’t realise the seriousness of what he does. He feels no guilt and he cannot anticipate the outcome of his actions; he only cares about tending the rabbits. ‘Now he won’t let me tend the rabbits’. Because Lennie is oblivious that he’s doing wrong he will just carry on. By killing him, George stopped what he knew would surely escalate.

This we can gather from Steinbeck’s control of the plot and characters. He seems to prepare us for the death of Lennie through the story line. An example of this is in the case of the shooting of Candy’s dog. Lennie is often descriptively compared to animals both mentally and physically ‘he drank with long gulps, snorting into the water like a horse’. We immediately make the association of the dog and Lennie without any judgments having been made. Slim takes the practical approach and reassures Candy that killing the dog was the compassionate, reasonable thing to do. Subsequently after George has shot Lennie and is sitting in the brush, Slim shows confidence in George’s actions. ‘You hadda George, I swear you hadda’. Through Steinbeck’s eyes we know Slim as a character that all the men look to for guidance and approval; everyone takes his word for the truth.

‘His authority was so great that his word was taken on any subject be it politics or love’. Slim gave George absolution. In the book there are characters like George and Lennie who are always trying to see the positive side of life and then there are characters like Crooks and Curley who see the negative. Slim is more of a balanced character, he see’s life how it really is. Steinbeck makes spiritual associations regarding Slim and often compares him to royalty. ‘His hands, large and lean, were as delicate in their action as those of a temple dancer’. The way Steinbeck describes Slim gives the impression that as Slim thought it was the right thing to do, Steinbeck thought so too.

However I am not entirely sure that George did do the right thing. A reason I have for it being wrong for him to have killed Lennie is that I don’t think Lennie is mentally competent to even understand what he is doing. He can’t comprehend right from wrong so he doesn’t deserve to be punished for his actions. Lennie cannot even remember the woman that raised him, his Aunt. ‘Lady, huh? Don’t even remember who that lady was. That was your own Aunt Clara.’ If he can’t remember Aunt Clara, how can he be expected to take responsibility for the death of Curley’s wife? But in the last chapter Lennie proves that he can learn, that he doesn’t always forget. ‘I didn’t forget, you bet, God damn. Hide in the brush an’ wait for George.’ Lennie should be allowed another chance, a part of him realises what he has done is very wrong, ‘I done a real bad thing’. So surely, with time he could learn. The result didn’t need to be his death.

Despite this, overall I think that George was right, not wrong to shoot his closest friend. He did what he knew was best for Lennie even though it was difficult and deeply traumatic for him. Steinbeck can very effectively make us sympathise with George more than we do with Lennie. He is able to make the reader question their opinions of right and wrong. It seems in the end Lennie got the easy way out because George had to carry on alone, living with what he had done.

Was George wrong to kill Lennie. (2016, Jun 02). Retrieved from https://studymoose.com/was-george-wrong-to-kill-lennie-essay 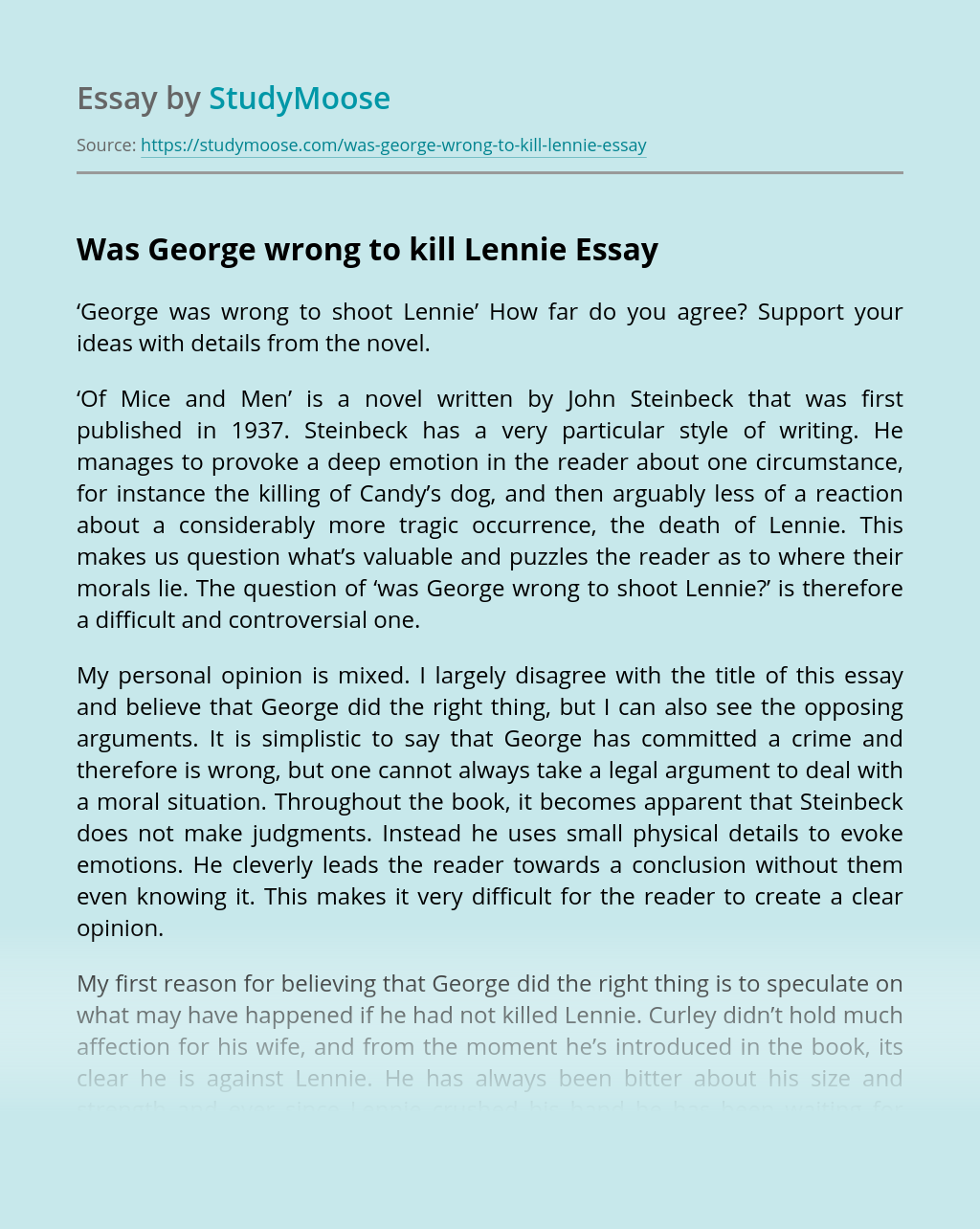 A Raisin in the Sun: Poem of Insecurities

The dreams of the characters in the Raisin in the Sun by Lorraine Hansberry illustrated the theme of Langston Hughes poem. Lena, Walter, Ruth, and Beneatha all lived under the same roof, but their aspirations were all different. Being the head of the house, Lena just wanted her children to live the lives they imagined... VIEW ESSAY

Easyjet is one of the successful European ‘no frills airlines’. The airline was founded in 1995 by a Greek man called Stelios Haji-loannou. A concept that made him found the Airline was based on the fact that customers’ demand for short-haul air transport is price elastic. This can be translated to mean that when flight... VIEW ESSAY

The documentary genre has changed over time. Changes in society have had an impact on the change. There are large commercialist pressures for documentary to become more entertaining and engaging to capture a wider cinema going audience. Documentary has become increasingly popular. Documentaries such as Bowling for Columbine by Michael Moore have been given numerous... VIEW ESSAY

EARTH PRE TERRAN EMPIRE ANTARCTICA 7 AM EST The skies were dark and clouded, a faint light only glowing from them due to the sun behind them. The air was cold; without proper protection you would probably not survive. A light gust blew around the snowy landscape; sending some bits of snow flying up into... VIEW ESSAY

Blindness can manifest itself in many ways. Arguably the most detrimental form of this condition may be the figurative blindness of ones own situations and ignorance towards the feelings of others. In Raymond Carver’s short story “Cathedral,” the narrator’s emotional and psychological blindness is immediately apparent. The many issues faced by the narrator as well... VIEW ESSAY