Was Fidel Castro a Horrible Leader

Fidel Castro was born by the name of Fidel Alejandro Castro Ruz and would grow up to change the nation of Cuba in not so good of ways. Fidel was born to his father, Ángel Castro y Argiz and his mother, Lina Ruz González. Fidel attended Catholic schools along with his six other siblings, where he got into politics and would soon become his career. As life began to go on after graduation, Fidel began to practice law and then became a part of the Cuban People’s Party.

Don't use plagiarized sources. Get your custom essay on
“ Was Fidel Castro a Horrible Leader ”
Get custom paper
NEW! smart matching with writer

After being apart of this Party, he decided to run for the House of Representatives but elections were canceled. Some believe Fidel Castro was a horrible leader but some also believe he did tremendous things for Cuba and its people.

With around one hundred and twenty three women and men he attacked the Moncada Army Barracks. He was seen to be the leader of Cuba’s Revolution and as someone who could help the country. He was then arrested and sentenced to fifteen years but only served two before being released. Castro went away for a little while for think up a plan and finally overthrew Batista on January 1st of 1959. Little did they know, the man that people saw as this man in shining armour coming to save them would do them much worse.

Fidel Castro promised many things to the Cuban people that never fully came to fruition. Firstly, Fidel took over the country of Cuba to become a communist dictatorship which made the country take a turn for the worst.

Fidel Castro, the communist leader of Cuba, would be considered a villian. Most communist countries like China, North Korea, and Vietnam are not known to have good reputations among people due to their views which are communist. Like many other communist countries, many things that go on around the world outside of the country is kept protected by the government. “Many others who opposed the revolution were imprisoned in Cuba. The government retained control of the media and ran several reeducation centers for political prisoners” (Hamilton). People who felt differently about aspects of the government were sent to prison just for simply disagreeing with the way the government was ran. “ Repression of gay people was particularly harsh” (Hamilton). Imprisoning people just because they are homosexual isn’t right in any standard. “Fidel’s Cuba boasted a previously unknown degree of sovereign separation from the United States” (Washington Post).

The Cuba that has been built by Castro made it seem as if the trade embargo between the United States never happened but it indeed did. Not having the United States with Cuba definitely messed up their flow of trade due to a lot of trading happening between the two before the embargo. “His trade agreement with the Soviet Union in February 1960 further deepened American distrust” (Britannica). We all know that the U.S. hasn’t always had good relations with the Soviet Union/ Russia and somewhat still don’t to this day. People beg to differ that Castro was a villain because he did make improvements for healthcare, housing, and change the literacy rates in Cuba for the better. Although he did help the people of Cuba some, it does not outweigh all of the horrible things Castro did as dictator.

A connection to today’s society is what is taking place in the United States as we speak with President Donald Trump. President promised many things to the people that would vote for him during elections. He promised tax cuts, but it seems to be that these “tax cuts” have only been put in place to benefit the rich people that he has been among his entire life. Obamacare has been referred to as disaster but actually helped people that needed an affordable type of healthcare. President Trump has since repealed Obamacare in change to replace it with something else. This plan has not gotten through the Senate. Just like Castro, our current leader, Donald Trump has dished out vows for the nation of the United States that have not been put in place. Many of his followers in the beginning believed those things and continued to vote for him, but now they have been disappointed and some even regret it.

Overall, Fidel Castro is seen a villain by the majority of people due to him overthrowing and leading the government of Cuba to be communist. He did do some good for the people of Cuba, but it wasn’t enough to prevail over all of the wrongdoings he had done over 49 year reign. Fidel, like Trump, broke many promises made to the people.

Was Fidel Castro a Horrible Leader. (2021, Apr 25). Retrieved from https://studymoose.com/was-fidel-castro-a-horrible-leader-essay 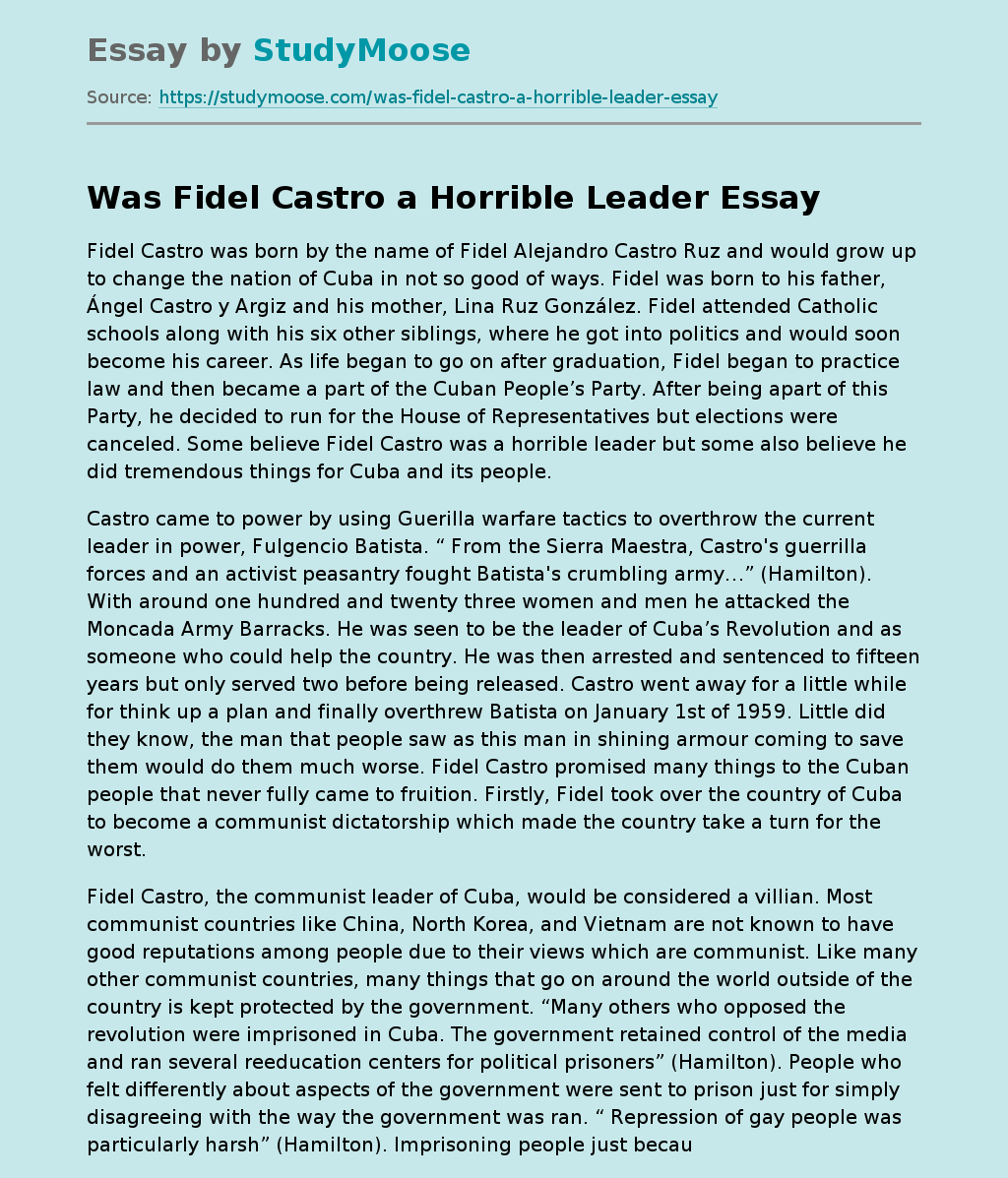