The Wages of athletes

How would you like to be paid twenty-three million dollars a year ? It is obvious to say that everyone would more than love it. This figure is only one of the many outrageous wages athletes are being paid today. True, not all twenty-three million dollars goes directly to the athlete because of Uncle Sam. Still these figures are too extreme regardless of the sport, baseball, football or basketball.

The athletes here in the United States are without a doubt the greatest on earth.

Don't use plagiarized sources. Get your custom essay on
“ The Wages of athletes ”
Get custom paper
NEW! smart matching with writer

The only problem is so are their wages. Although the athletes pay indicates the greatness of their individual ability, the amount earned per year is way beyond reason. Due to these great wages being paid in particularly in the sport of basketball, the games greatness is being lost. One example of the extreme pay an athlete can achieve is shown by an athlete named Michael Jordan. This basketball player is being paid thirty million dollars for the 96 – 97 season.

Last year for the season of 95 – 96, Jordan was only being paid 3.5 million. While being paid this salary, Jordan hardly ever complained too much even though the amount Jordan was being paid was very low for the NBA. During this season Jordan never made any kind of statement about quitting or even leaving for another team to make the money he may deserve. Other players such as Shaq (Shaquille O’neil), and Reggie Miller, and even teammate Dennis Rodman have been known to say things like this.

The only difference between Jordan and the other athletes is that Jordan seems to have a great devotion towards his team and the other players do not have the same loyalty or devotion.

The circumstances appear that Jordan might actually play for the mere love of the game, while others only play for the love of money. Regardless of the motivation for playing the sport, a salary of 30 million dollars is outrageous. If you were to break down this thirty million dollars into different categories such as how much money Jordan earns per game, the true outrageousness will appear.

For instance over an eighty-two game season Jordan will be paid $365,854 a game. That is more than any middle and even most upper class people make in one year. In one single game, it is hard to believe that one man could make more than one person for a year. Believe it or not though, most athletes do. As the years go on athletes keep asking for higher wages. With this want of higher and higher wages, the sports fan starts to think that the only reason the athletes are playing is for the love of money, not for the love of the game in which they compete. These professional athlete’s are playing for millions upon millions a year, and it is continually growing. So where do these outrageous figures stop ? Who Knows. It may go on forever and the appreciation and greatness of each sport will become lost million dollars is outrage

The Wages of athletes. (2020, Jun 02). Retrieved from https://studymoose.com/wages-new-essay 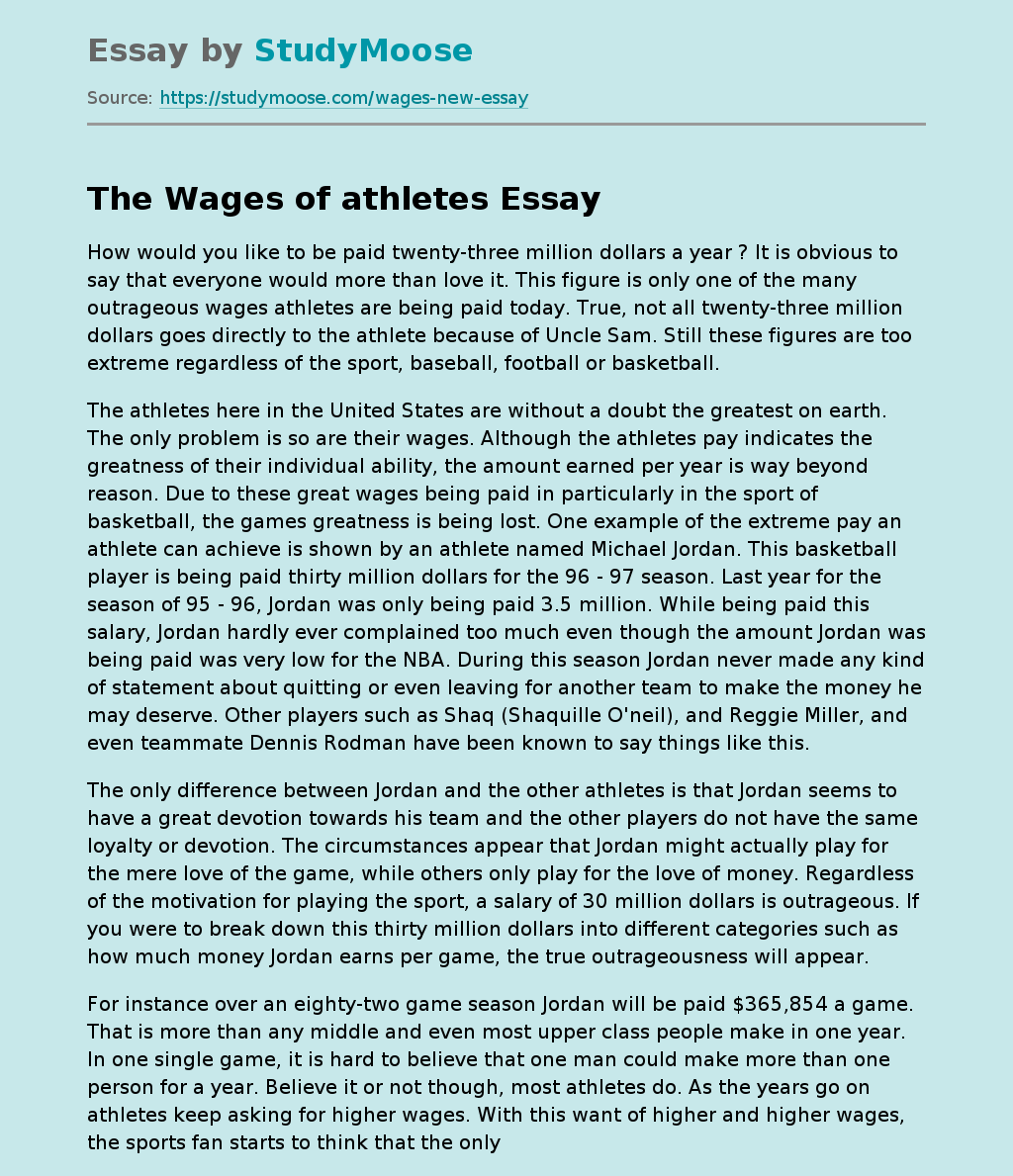