Volunteer Tourism or “voluntourism” is defined as a process of spending a person’s leisure time and resources traveling to a place to serve as a volunteer. Although, the concept of feeding those in need is many years old, yet volunteer tourism got popular in late twentieth century and was on peak in the matter of trends in the early twenty-first century. (J,2018). With the increase in research of voluntourism from last few years, the efforts show that the mechanism and consequences of these activities focus on the customer perspective, yet empirical results on this topic is still limited.

Don't use plagiarized sources. Get your custom essay on
“ Volunteer Tourism: Welfare or Misery for Host Community ”
Get custom paper
NEW! smart matching with writer

Tourist travels are planned during the vacation period.

An individual escapes from their daily work issues and routine and enjoy. Thus, the tour packages try to lure the tourists away from their daily work environment. Moreover, volunteer tourism and traditional tourism differ from each other on the basis that volunteer tourists can face the harsh truths of the ways of poverty. Therefore, actual tourism rewards as a distance from daily work and life routine, VT arise the feelings ‘make a difference’ and to give it back.

Proficient in: Importance Of Travel And Tourism

’ The purpose for performing VT is they should bring positive effects on local communities of developing countries. Most of the studies focus on benefits to volunteers rather than to local community. Various studies found that people volunteer to learn more about themselves, to have a closer view of the foreign cultures, self-interest, to serve, and to develop their social and career skills.

According to various studies, the children living at orphanages where these VT volunteers work at are not orphans but 80-90 percent times, either one or both of those children are alive.

Poverty, lack of social services and limited access to health care and education, parental drug, and alcohol abuse result in entry of these children to those orphanages. With this increase in VT and orphan tourism, the question that arises is that what effect it has on the children. It also affects the local culture and community. Disturbing the destination’s local culture deprives the destination’s development and autonomy. It can lead to harm to their local culture, community, infrastructure, and values, introduction to harmful diseases that the community doesn’t have resources to fight, introduction to harmful habits such as smoking, prostitution, drugs, and alcohol, and excessive demand and exploitation of natural resources.

On doing further research, it was found out that a number of volunteer programs do not require that their volunteers need to have any professional skills in order to perform. There is no control over selecting the right volunteers and aligning their skills with the volunteer jobs. Local people are forced to indulge into such kind of tourism. For example, filling out that orphanages by increasing the number of children.( Frilund,2018). In Ghana, a misfit arose between the staff of an orphanage, staff and VT team members. The staff said that volunteers were helpful as they filled up the staff shortage. But it was found out later that there was no shortage, also the staff said that they would leave half of their chores unattended so that there was something to do for the VT team and they themselves could rest. Bargeman, B., Richards, G., & Govers, E. (2018). The more troubling factor for the VT community is the small amount of unintentional exploitation done by volunteers without awareness of harm in the long run. Children in orphanages are victims of degradation due to their immediate need for attention from adults.

There is a risk of using a vulnerable individual as a commodity for social gain as reflected upon by one activist: “You exploit the people for ‘the poor who have nothing, you invest in short- term projects that contribute to long-term problems, you make yourself feel good while leaving those cute little cherubs behind, you come back…and show off all of your good deeds to your friends—you’re the hero, you’re the bleeding heart that did something” (Thomas,2010).It is a kind of exploitation when photographs or stories of vulnerable people are used to enhance the volunteer’s image or the tourism company’s marketing. Children typically do not understand where and how their images will be shared, and are usually not knowledgeable enough to give informed consent. This is an obvious violation of basic human rights to privacy and dignity, often aided by social construction of orphan volunteerism (Bargeman, B., Richards, G., & Govers, E. ,2018) Although, the intensions of Volunteer Tourism are to work for the welfare of the society. But some private companies have converted it into completely business where they exploit the host community and its resources. Volunteers are unintentionally responsible for exploitation for human rights of the children, jobs opportunities of the locals, affecting their natural resources, exploiting their culture etc. 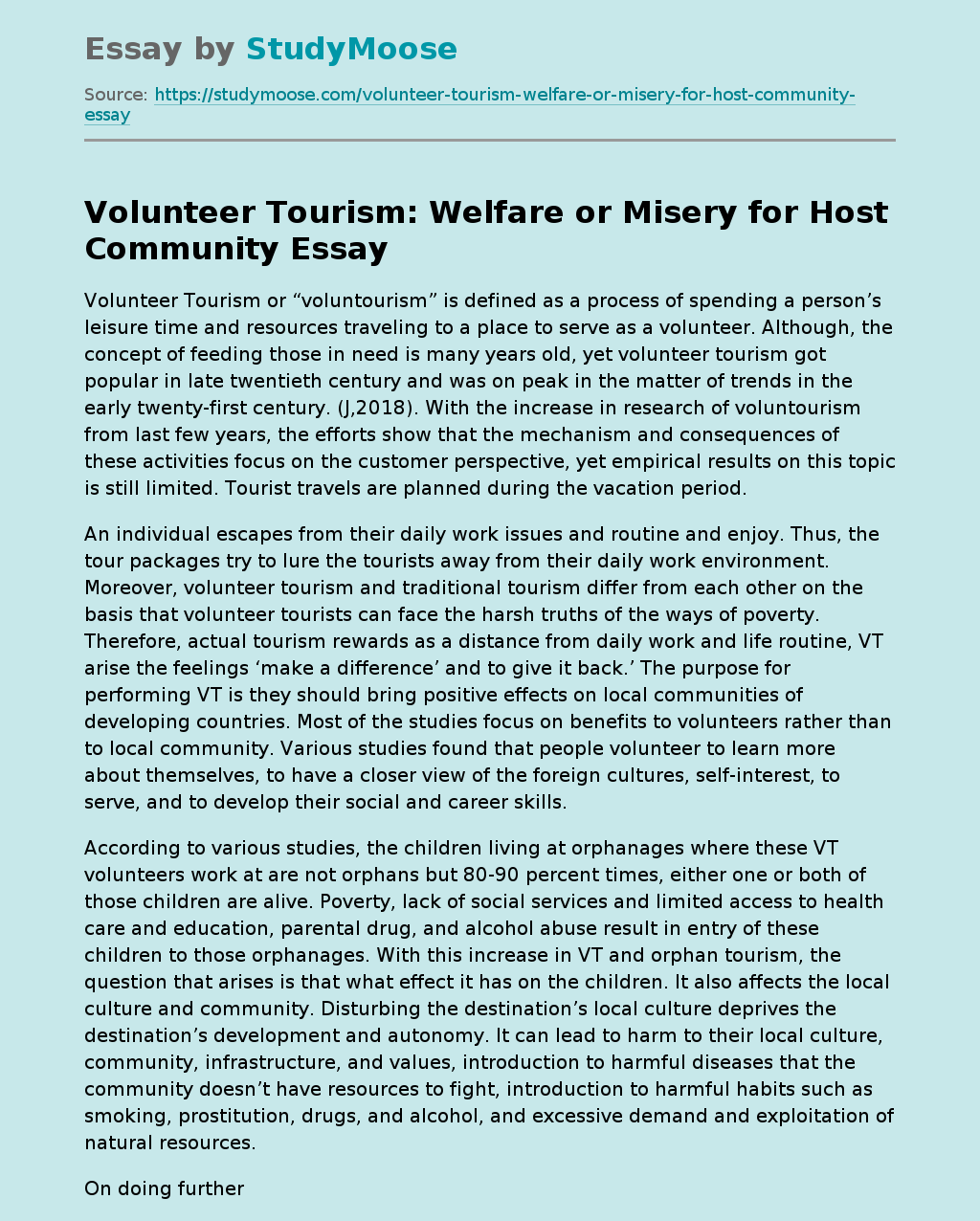