Violence in the Kite Runner

An act more familiar to some than others, but a common act all the same. We see it everyday and everywhere, from the kids fighting in the sandbox to the man being shot in the head no matter where you go, violence is an act that no one is safe from. But is that a bad thing? Hasn’t that been the norm since day one for humans? People see the word violence and automatically think that its a negative, that nothing good can come from it.

Don't use plagiarized sources. Get your custom essay on
“ Violence in the Kite Runner ”
Get custom paper
NEW! smart matching with writer

Perhaps if we look at it in a different perspective, though, we may be able to form a better opinion on the term.

Thankfully, Khaled Hosseini’s work, “The Kite Runner” does the job for us. The Kite Runner is a story written by violence, from Hassan’s rape to Amir’s beating, almost every major point in the story is about a violent act. And while at a first glance most would assume that the book is just showing how violent Afghanistan was, it was actually Hosseni trying to show something entirely different.

If we look at the after effect of every violent act, we see that it does more than just hurt another person, it shapes the lives of the people around it, it can set the mold for how a person will become, and it can even be the cause of great good.

A great example of this can be found from the most important scene in the book, Hassan’s rape at the hands of Assef.

This is where we find Amir at his weakest moment, where he truly realises that when it came down to the “one final opportunity to decide who [he] was going to be”(Hosseini 77) all he could do is run. The result of his actions hit almost instantly, he loses his friend, his father’s respect, and his own morality in a matter of months. Even when he moves to America as a place to bury his sin, it pulls itself up whenever the memory is recalled. The choice Amir makes seems to become the curse of his life, that is, until the end of the book when we realize how much it changed him for the better.

Because it was thanks to that event all those years ago that forced Amir to atone for his sins, and with that atonement, he was able to save the life of the young Sorab and become a man that his father, Baba, would be proud of. Had this violent act never happened Amir might have never became a man that could stand for something, he would have leached off Hassan until he was an adult, and by then it would be too late to change. But because Hassan’s rape separated Amir from Hassan, Amir was able to grow and become the man he is at the end of the story.

Another look into the influences of violence can be found in the history of Assef. We know from Assef’s actions that he a man who is clearly been shaped by violence, in fact, he could almost be called a symbol of violence itself, as he was the rapist of Hassan and his son, a strong supporter (and member) of the taliban and its actions, as well as the near murderer of Amir. But, just like all the other acts of violence in the story, Assef’s actions, while cruel and unforgivable, has brought good into the world as well.

This good is found in what is probably the most violent scene in the book where Amir finally has to face his ‘sin’ face to face, in the form of a fight to the death versus an adult Assef, brass knuckles and all. It was in this scene that “For the first time since the winter of 1975, [Amir] felt at peace” Assef’s violence was the force that would push Amir to finally be able to accept the mistakes he has made and do something to make up for them. Had Assef just thrown him in jail or not even bothered to be the violent person he was, then Amir would have never of had the chance to stand up for something for the first time in his life and finally put the past behind him.

The point is, all these acts of seemingly pointless violence are actually in fact crucial aspects of the story, and if any one of them were to be removed, the happy ending we see at the end of the story would not of been able to happen. But thats not the important part. The real lesson to take from this is seen when you compare this to our current lives. Violence, although a negative in the human life, is still a part of our lives. Every time a Amir went through an act of violence, he grew as a person, whether it was growing by learning about his true self, or growing by learning to stand
up for something, violence is what made Amir the man he was at the end of the story, violence is what saved Sohrab’s life.

And the same things can be found in our normal American lives. When a war breaks out in another country, we as a society learn something from it. When a school is shot down by a crazed gunman, we unite together as a country to mourn the loss and make then try sure that it will never happen again. What Hosseini was trying to show us was not that violence is a terrible thing that should be avoided and ran from at ever corner, he was telling us something much different. That violence is a part of life, we cannot run from it, we cannot hide from it, we can only accept it and learn how to grow from it.

Violence in the Kite Runner. (2016, Apr 12). Retrieved from https://studymoose.com/violence-in-the-kite-runner-essay 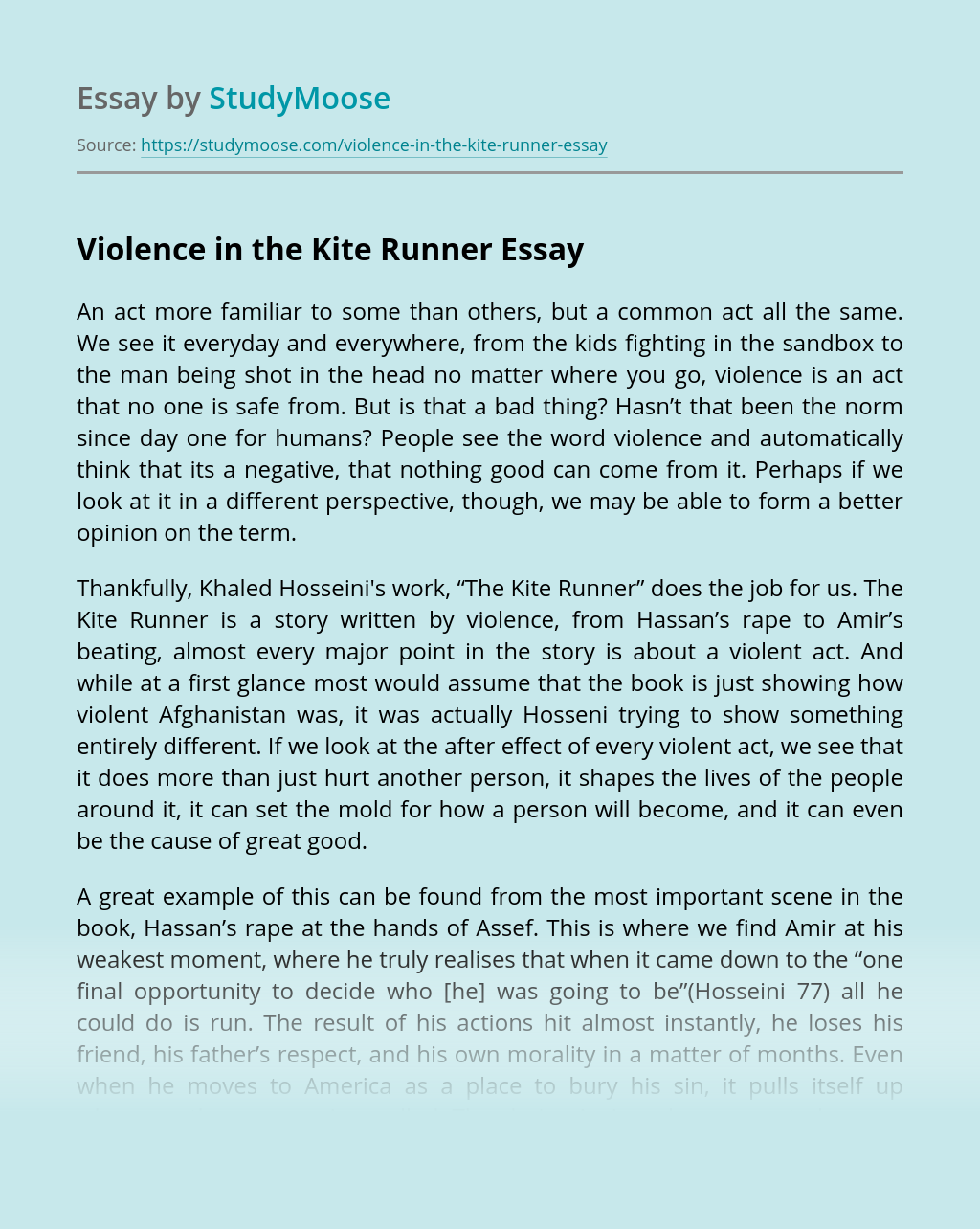