The Kite Runner is written by Khaled Hosseini. The novel is set in Kabul, Afghanistan; a cosmopolitan city at the time. Western culture started mixing with Afghan traditions. The novel tells a story about a boy named Amir whose closest friend is Hassan, a servant’s boy. The story is set against a backdrop of tumultuous events, from the fall of Afghanistan’s monarchy through the Soviet military intervention, the exodus of refugees to Pakistan and the United States, and the rise of the Taliban regime.

Don't use plagiarized sources. Get your custom essay on
“ The Kite Runner AP Review ”
Get custom paper
NEW! smart matching with writer

The Kite Runner tells a father-son story with themes of guilt and redemption which feature prominently in the novel. The latter half of the book centers on Amir’s attempts to atone for this transgression by rescuing Hassan’s son over two decades later. There are many themes in this novel which is why this book is praised so much. One of the themes of this story is the search for redemption. Amir’s quest to redeem himself makes up the heart of the novel.

Early on, Amir tries to redeem himself in the eyes of Baba, primarily because his mother died giving birth to him, and he feels responsible. To redeem himself to Baba, Amir thinks he must win the kite-tournament and bring Baba the losing kite, both of which are inciting incidents that set the rest of the novel in motion. The more substantial part of Amir’s search for redemption, however, stems from his guilt regarding Hassan. That guilt drives the climactic events of the story, including Amir’s journey to Kabul to find Sohrab and his confrontation with Assef.

The moral standard Amir must meet to earn his redemption is set early in the book, when Baba says that a boy who doesn’t stand up for himself becomes a man who can’t stand up to anything. As a boy, Amir fails to stand up for himself. As an adult, he can only redeem himself by proving he has the courage to stand up for what is right. Another significant theme of the story is the love and tension between fathers and sons. Amir has a very complex relationship with Baba, and as much as Amir loves Baba, he rarely feels Baba fully loves him back.

Amir’s desire to win Baba’s love consequently motivates him not to stop Hassan’s rape. Baba has his own difficulty connecting with Amir. He feels guilty treating Amir well when he can’t acknowledge Hassan as his son. As a result, he is hard on Amir, and he can only show his love for Hassan indirectly, by bringing Hassan along when he takes Amir out, for instance, or paying for Hassan’s lip surgery. In contrast with this, the most loving relationship between father and son we see is that of Hassan and Sohrab.

Hassan, however, is killed, and toward the end of the novel we watch Amir trying to become a substitute father to Sohrab. Their relationship experiences its own strains as Sohrab, who is recovering from the loss of his parents and the abuse he suffered, has trouble opening up to Amir. These are a couple major themes of the story which prove why this book is favorable. The Kite Runner is a favorable novel. It has hit the hearts of many people and became a bestseller after being printed in paperback and was popularized in many book clubs.

It was a number one New York Times bestseller for over two years. Many parts of the plot had drawn significant controversy in Afghanistan. The 19th Afghan ambassador to the United States had thought that the novel would help the American public to better understand Afghan society and culture. In conclusion, The Kite Runner is a favorable novel and should be recommended to all readers who enjoy an adventure filled with betrayal, guilt, redemption, friendship, and uneasy love between fathers and sons. 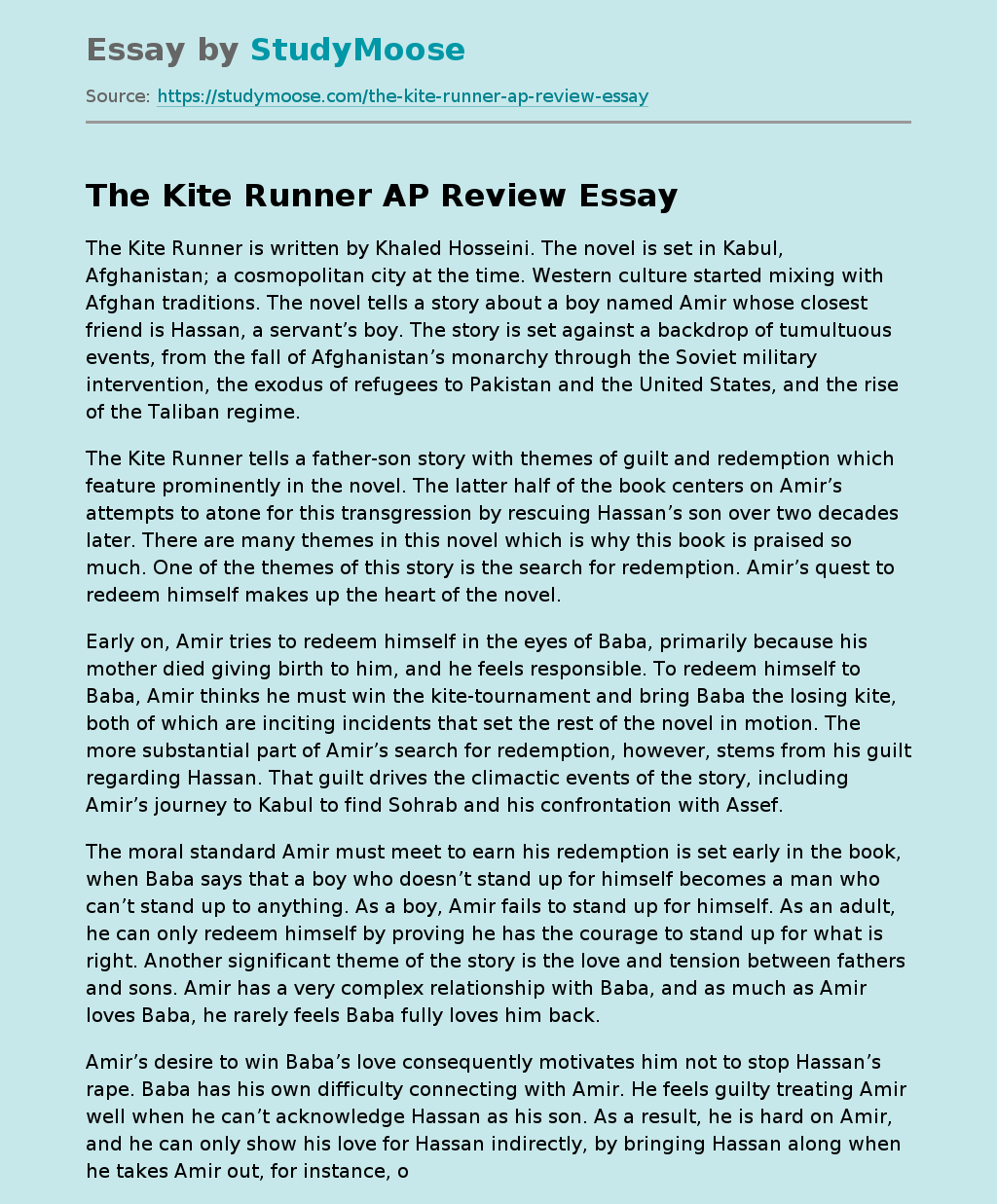