The impacts of tropical cyclones

The impacts of tropical cyclones

The impacts of tropical cyclones are determined by a number of climatic, geographical as well as socio-economic factors. The higher the intensity of tropical cyclones, the greater the potential damage. Certain geographical areas as well as certain landscapes are more susceptible and vulnerable to cyclones of high intensity. However, the presence of effective mitigation plan can greatly reduce the severity of damage. Due to the absence of such mitigation plan, developing countries are usually affected more severely, with higher number of casualties and greater damage to lives and economy.

Don't use plagiarized sources. Get your custom essay on
“ The impacts of tropical cyclones ”
Get custom paper
NEW! smart matching with writer

The impact of tropical cyclones on developing countries can be very significant in terms of the detrimental aspects. The lack of proper structural measures, poorly built houses and absence of coordinated public warning and evacuation system are key reasons. As a result, fatalities are high and effects on economy can be crippling.

Bangladesh is a target of tropical cyclones.

Its vulnerability to destruction from tropical cyclones lies much on the fact that it is a bowl shaped alluvial plain and much of the country lies only a few feet above sea level.

The 1991 Bangladesh Cyclone (category 5) resulted in 138,000 deaths and much destruction. The cyclone resulted in a storm surge of over 20 feet high. The low elevation of much of coastal Bangladesh allowed this surge to reach extremely far inland and hence caused much damage.

Although there are cyclone shelters, many had just a few hours of warning and did not know where to go for shelter. Others who knew about the storm refused to evacuate because they did not believe the storm would be as bad as forecasted.

Houses were of poor quality and most were not able to withstand the storm. As a result, approximately 1 million homes were destroyed, leaving about 10 million people (a substantial portion of Bangladesh’s population) homeless. Whole villages were swept away. For an additional 3-4 weeks after the storm had dissipated, mass land erosion resulted in more and more farmers losing their land.

Hurricane Mitch in 1998 caused such massive and widespread damage in Honduras that Honduran President claimed it destroyed fifty years of progress in the country. Mitch destroyed about 70% of the crops, totalling to about $900 million in losses. An estimated 70-80% of the transportation infrastructure of the entire country was wiped out. Similarly to Bangladesh, because of poorly built houses, most could not withstand the hurricane, and about 25 small villages were reported to have been entirely destroyed by the landslides caused by the storm. Over 20% of the country’s population, possibly as many as 1.5 million people, were left homeless. The extreme flooding and mudslides killed over 6,500, with several thousand missing. The severe crop shortages left many villages on the brink of starvation.

In poor countries too, the response to tropical cyclones are also ineffective. At the aftermath, lack of proper housing and sanitation usually lead to outbreaks of malaria, dengue fever, and cholera. This was the case for Honduras in the aftermath of Hurricane Mitch.

Florida State in US is prone to tropical cyclones

In comparison, Florida State in US, also a region prone to tropical cyclones, has much less casualties in its history of tropical cyclones. In the period 1975-1999, number of deaths due to cyclones is 46, which is much lower as compared to those in developing countries. This is due to firstly the presence of an effective cyclone forecast and warning service, secondly, the aherance of houses and buildings to building codes and in addition, community preparedness at all levels to meet the exigencies. Floridians are well informed of preparations and home safety measures. The establishment of various organisations such as Florida Real Estate Hurricane Relief Fund and Florida Division of Emergency Management ensures that the effects of hurricanes are dealt with swiftly.

However, losses incurred due to cyclones are still high. In the above stated period of 1975-1999, cyclones cost Florida $42 billion. Hurricane Wilma in 2005 alone cost Florida $20.6 billion with widespread destruction of critical infrastructure, including power, water and sewer systems. Florida’s sugar industry was hard hit as damage to sugarcane crops was critical and widespread.

The significant increase in damage costs

As with many developed countries, the significant increase in damage costs is a result of accelerated property developments in the areas even while there are reductions in fatalities. The high damage costs and the Florida’s sugar industry also shows that developed countries are vulnerable to impacts of tropical cyclones as well, especially when the intensity of cyclones is great.

Recently, it has also been discussed that cyclones can even have a positive economic impact with income generated through building, insurance claims and relief funds. It can also result in better houses and buildings built in replace of the damaged ones.

The developed countries are usually better equipped with forecast, mitigative and response systems as they have the resources and necessary technology. Even as damage in costs are increasing, the developed countries usually have the ability to recover their losses. For less developed countries however, the impacts can be crippling, hindering and further setting back the development of the country and its economy greatly. This is compounded by the fact that they are usually more dependent on agriculture for subsistence. Certain geographical factors will also put countries at a more disadvantaged and vulnerable state (Bangladesh).

The impacts of tropical cyclones. (2020, Jun 02). Retrieved from https://studymoose.com/using-case-studies-dcs-ldcs-assess-impacts-tropical-cyclones-countries-new-essay 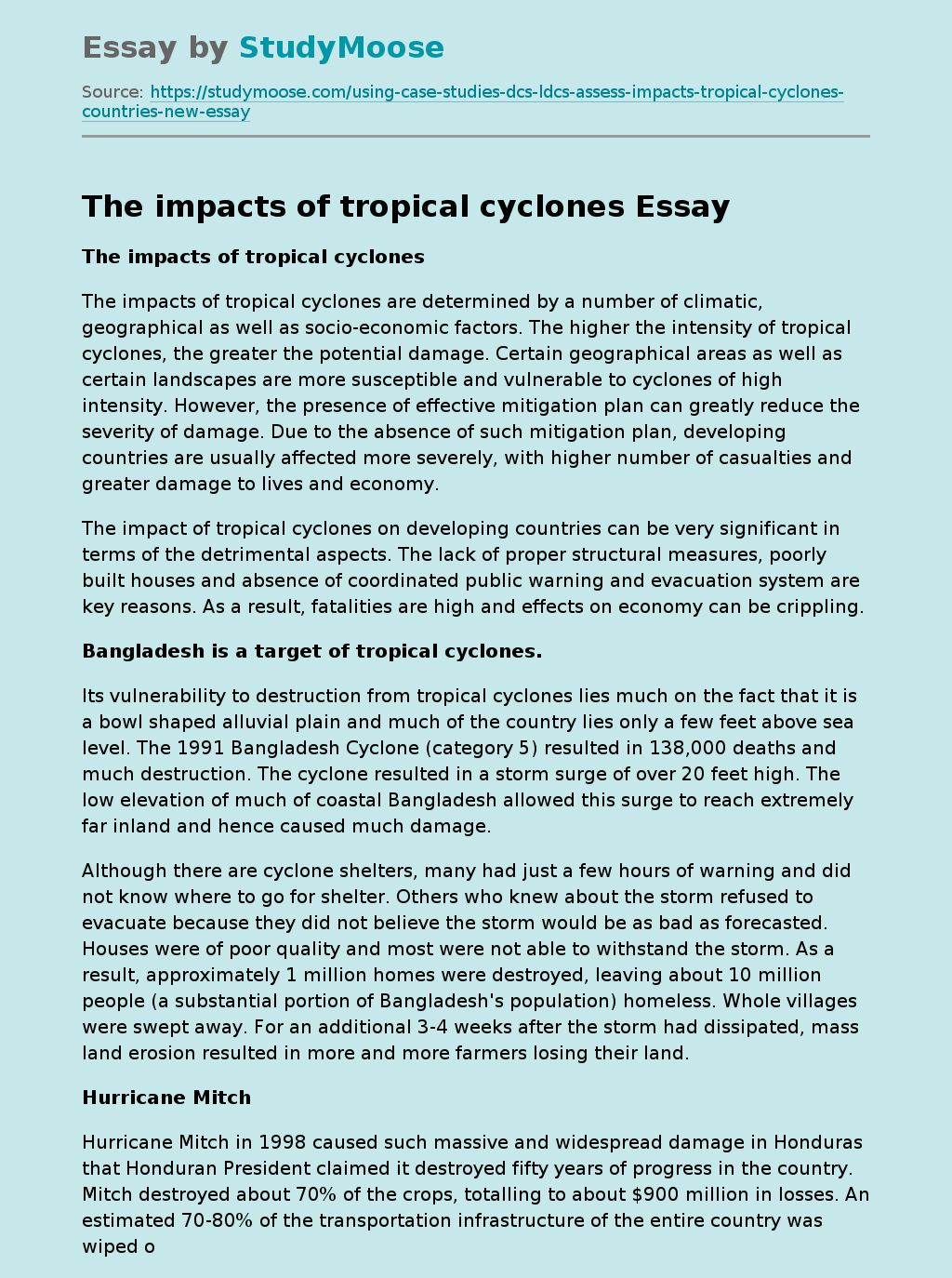