At one point in everyone’s life they have felt that they were being watched. Now that feeling may not be just a feeling anymore. The government uses aircraft drones to video and take pictures of other countries to spy on them. Although, the government has started using these drones and other spying devices to watch the United States as well. One day, you may observe a miniature helicopter with cameras or a small plane looking upon the houses of this country’s citizens houses.

Don't use plagiarized sources. Get your custom essay on
“ Usage Of Drones ”
Get custom paper
NEW! smart matching with writer

There is a very good use for these drones as well, “Police departments in Texas, Florida and Minnesota have already expressed interest in the technology’s potential to detect fugitives on rooftops or to track them at night by using the robotic aircraft’s heat-seeking cameras” (Reporter). The police have already started using helicopter drones to help search for suspects and criminals. The use of drones in residential areas needs to be limited to the use of police to find criminals that have been sited or thought to have been in that area.

The fact that using these drones is helping the police find criminals is good, but spying on the innocent people of the suburbs is an invasion of privacy and unneeded. During the event that the government starts spying on residence for no reason is when these drones become misused. “FBI director Robert Mueller told congress the agency owns several drones but has not yet formed policies or guidelines on their use. Confirmation that the U.

S. is using the surveillance equipment to monitor its own citizens comes after the NSA phone tracking scandal rocked trust in the government” (Jerreat). The head of the FBI has admitted using drones to spy on U.S. citizens very solemnly but after the NSA tracking citizens cell phones without any kind of permission makes it very hard for people to trust anything that the government says. Drones being used violates the fourth amendment because of search and seizure.

There is also a chance that these drones could be hacked and taken over. The United States could become a Communist Country if the government continues “watching” the people of this country with these drones. The government should not be able to spy on United States citizens because these actions violate the people’s rights as individuals. The Fourth Amendment is being violated if drones start flying around watching those who haven’t done anything. Core values such as privacy and protection from the government are always within its sweep. A continuing question, though, is how the demands of its protection apply to an ever-changing society in which new and pervasive forms of technology are increasingly common.” President Obama signed an FAA bill into law that provides for the integration of “drones,” or more properly into the nation’s airspace.

This has generated legitimate concerns that UAVs could be used by the government in ways that infringe privacy rights”(Villasenor) Although there are many rules and exceptions throughout the Supreme Court’s Fourth Amendment. In short, the Fourth Amendment regulates when, where, and how the government can conduct searches and seizures. The Supreme Court held that police wiretaps of the defendant’s home telephone did not constitute a Fourth Amendment search because the police did not trespass onto a persons property to intercept his or her conversation. One of the modern Fourth Amendment tests relied upon by courts in assessing whether government monitoring constitutes a search. The Court’s thinking at the time was that if the person’s home, property, or papers were not physically invaded, then no search in the constitutional sense occurred. It considers whether the person has a subjective expectation of privacy in the area to be searched and whether society is prepared to deem that expectation reasonable.

The technology used by UAVs may be a decisive factor considered by courts in determining whether individuals have an expectation of privacy in the object or area of the drone search. The question, is whether drones have the potential to be significantly more invasive than traditional surveillance technologies such as manned aircraft or low-powered cameras technologies in which have been upheld in previous cases. Some have asked whether using sophisticated digitized platforms on a drone is any different from attaching the same instrument to a lamppost or another traditional aircraft. Technological developments make it increasingly easy to share and acquire personal information about others, oftentimes without their direct knowledge or consent. “As the American Civil Liberties Union explained in its December 2011 report, the machines potentially could be used to spy on American citizens.

The drones’ presence in our skies threatens to eradicate existing practical limits on aerial monitoring and allow for pervasive surveillance, police fishing expeditions, and abusive use of these tools in a way that could eventually eliminate the privacy Americans have traditionally enjoyed in their movements and activities” (Franceschi-Bicchierai). Currently, many states and municipalities employ automatic license plate readers, which are usually mounted on police vehicles or stationary objects along the streets, to take a snapshot of a license plate as a car drives by, and store this information in a large database for possible later use by law enforcement. It is alleged that these devices can be used to track a person’s movements when police aggregate the data from a multitude of ALPR stations. A majority of the reviewing federal circuit courts have held that a person has no reasonable expectation of privacy in his license plate number. However, it appears that no federal court has addressed the constitutionality of the use of ALPRs, as opposed to plate numbers collected by a human observer.

Nonetheless, the question remains whether attaching an ALP, or any similar sophisticated technology to a drone would alter the constitutionality of its use by law enforcement. Some say yes, arguing that the sophistication of drone technology in and of itself is a unique threat to privacy. Drones are smaller, can fly longer, and can be built more cheaply than traditional aircraft. some drones could theoretically stay in the air forever. Unlike a stationary license plate tracker or video camera, drones can lock on a target’s every move for days, and possibly weeks and months. This ability to closely monitor an individual’s movements with pinpoint accuracy may raise more significant constitutional concerns than some other types of surveillance technology. With this increasing presence and usage of drones, a major concern is developing. Many people consider this advancement in technology as quite controversial. Many people believe that with drone technology in the government’s hand, we will begin to lose our privacy.

“A report on the military’s growing arsenal of unmanned aerial vehicles indicates that approximately 31% of all US military aircraft are now drones” (Boyle). if all of these drones that the military is using were hacked then who knows what might happen. With no restrictions on drones, governments have the power to monitor its citizens invading their privacy. Without any restrictions on drone technology, it can be expected that you will no longer have any privacy. Along with these privacy concerns, there are also great areas of concern in the subject of security and drones. Drones run the risk of becoming hacked therefore making them possible security risks. In a recent talk on National Public Radio, the topic of hacking of drones was brought up.

The method called “spoofing” has been used to take control of helicopter drones flying over ones head.. Spoofing is basically matching the signal of the actual controller and then increasing the strength of your signal allowing you to gain control. “Serial hacker Samy Kamkar turned up in an Arstechnica article yesterday with a pretty interesting hack. He’s put together a system of hardware and software that can be put together to build a drone. From there, that drone finds other drones out and about in operation, hacks the drone and then controls them. It is one of the most innovative drone hacks to ever come out, and it may have many people concerned about the potential malice that could be played out with such a capability” (Casaretto). The fact that it is easy for hackers to take control of these drones and use them for themselves and even take footage from them can be a very dangerous situation. this hacker could find out where you live, who your friends are, and who your family is.

The increasing presence of drone technology in today’s society is quite evident. We hear on the news quite frequently of a drone bombing or spying on someone in the war. Not only do we hear about what drones do, we experience the benefits that they provide for us. When we listen to the weather there is a possibly the information is received from an actual drone. Despite the many different types of benefits drones present, drones still present a very serious security and privacy risk. Drone use violates the fourth amendment if used to spy on civilians without actual reason. If the person has an expectation of privacy then that person should have their privacy. The United States people will lose all of their privacy in a matter of years if we allow drone research to continue. One must decide whether the privacy and security risks outweigh the benefits. 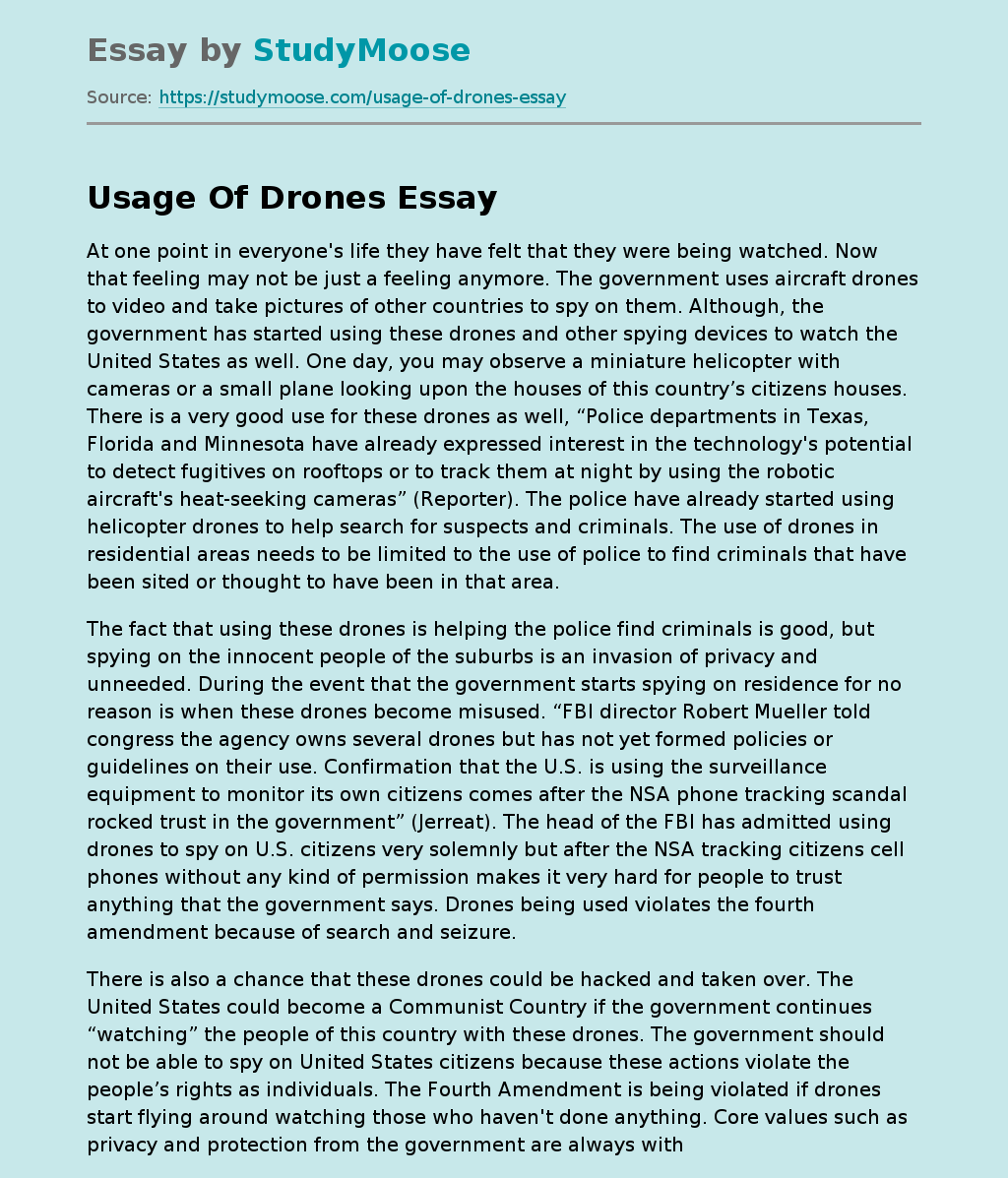