Shakespeare’s tragedy Othello has been brought to the stage hundreds, thousands of times with many different interpretations and readings due to its vast history of literary debate and analysis. Its thematic concerns are expansive and open to interpretation: they range from tragedy, love, power, jealousy, trust, class and race, and the actions of its characters often provoke controversy and harsh criticism, from Othello’s “fatal flaw” of envy, to Desdemona’s trivial persistence and Iago’s sinister and deadly plotting.

Don't use plagiarized sources.
Get Your Custom Essay on Two interpretations of Othello Just from $13,9/Page

Modern audiences, too, have certain expectations and ideas about the play, and it is vital, when producing a play like Othello to take these expectations into consideration. For these reasons, I am proposing two potential readings, or interpretations of the play, a feminist reading and a reading based on the themes of class and power.

A feminist reading would give voice to the play’s three female characters: Desdemona, Emilia and Bianca (the play’s only female survivor), provoking sympathy within the audience for them and portraying them as the true victims of the avoidable tragedy.

A feminist reading stems from the fact that in Shakespeare’s times, women, whether married or not, fell roughly into two categories: that of a fair, innocent and virgin, or a cuckolding whore. A feminist reading also recognises that it is the men’s deplorable attitudes in regard to women and gender that in part caused the tragedy, for instance, Othello’s response to Emilia insistence that Desdemona is honest, “She says enough; yet she’s a simple bawd/That cannot say as much” (Act 4 Sc 2).

The three focus scenes here are Act 1 Scene 3, Act 4 Scene 3 and Act 5 Scene 2. Attention must also be paid to Bianca, who plays an unknowing role in Othello’s jealousy. She receives Desdemona’s handkerchief from Cassio and gives it back to him when she discovers it is another woman’s. Her outburst at Cassio gives the on looking Othello what he thinks is proof of Desdemona’s infidelity while displaying her strong character and standing up to a man, behaviour which does not follow the stereotypical expectations of women of the time.

Act 1 Scene 1 establishes the context of a patriarchal society, and this is continued in Act 1 Scene 3 with Desdemona summoned to the Senate to defend her new marriage. She clearly outlines the nature of women’s status: “You are lord of all my duty, / I am hitherto your daughter. But here’s my husband;/ And so much duty as my mother showed/ To you, preferring you before her father, / So much I challenge…” In doing this, Desdemona shows simultaneously her strong will by “challenging” her father, and her reliance on the patriarchal structures inherent in her life.

The only way she can gain independence from her father is by submitting to another man, her husband. By doing this, she ultimately pays a price: her life. She, as a woman, is a designated prize or asset to her father (owner), and then husband, as reflected Brabantio’s question, “Oh thou foul thief, Where hast thou stow’d my daughter?” as one “stows” their possessions. Othello, in his speech to the Senate, which is usually considered noble and dignified, says “For such proceedings I am charged withal – I won his daughter.” (Act 1, Sc 3, 93-94)

The stillness of the bedroom scenes preceding Desdemona and Emilia’s murder are essential to this reading, both beautiful and dreadful, as the women are completely blind to their fate. In Act 4 Scene 3 the two characters to voice their opinions about men, Desdemona fully reveals her childish innocence with her question about faithfulness: “Wouldst though do such a deed for all the world?” Emilia reveals her sense of humour and practical realism: “The world’s a huge thing: it is a great price for a small vice” and “Nor I neither by this heavenly light: I might do’t as well I’th dark.” Emilia’s conclusion that it is men who commit adultery without moral punishment and her statement of sexual equality is an important message within the play. She also challenges chastity by pardoning women who cheat on their husbands saying that men “slack their duties” and “break out into peevish jealousies” (Act 4, Sc 3, lines 87 and 89).

“As ignorant as dirt! Thou has done a deed –

I care not for thy sword; I’ll make thee known,

Consequently, at the conclusion of Act 5, Othello should not be portrayed as a tragic hero, nor she he regain his prior noble stature, given his murderous and unwarranted actions, and the audience’s sympathies should lie with the play’s women. Othello cannot be excused from the murder of his wife.

READING FOCUSSED ON CLASS AND POWER

This kind of reading places emphasis on the class and power themes inherent in the play and its Victorian war setting, drawing attention to the villainy of the politicians and Senate of Venice, to whom Othello is just a slave to the state, and who fail to recognise the foul plot being played out in his army by Iago. Iago is motivated not merely by jealousy, but by a lack of power and status, as demonstrated in his wife’s poor social status and his role as an “outsider” from the hierarchy of Venetian society and the army. Iago essentially writes the play’s main plot, takes a key part in it, and gives first-hand direction to the others, most notably to Othello. Iago manipulates such power structure as the military, race and gender to undermine Othello and bring about his ultimate downfall.

Indeed, not only is “seeing” and the gap between appearance and reality a central theme of the play, it overlaps with other major thematic strands and sheds light on still others, including the theme of patriarchy and the political state. The issues of class and power could be visually presented to the audience by the use of costume, dressing the characters, especially those who hold power, in business suits. This also accentuates the fact that, although very business-like and matter-of-fact, the Venetian state is playing with people’s lives. In the context of this reading, Iago would be portrayed as a cynical sociopath, as opposed to inherently evil Machiavellian, willing to do whatever is required to get what he wants. The focus scenes, according to this reading, are Act 1 Scene 3, Act 3 Scene 3 and Act 5 Scene 2.

At the beginning of the play, during the Senate scene, the Duke should barely recognise Othello’s presence, Othello is a servant, a hired gun sent to Cyprus to do the Venetian state’s dirty work. By the close of the play, it should be clear that Othello was an expendable resource, and will be replaced by someone else, probably also an outsider, desperate to climb the ladder of authority. Othello, despite his stature as a powerful and strategic army general, could never, for racial reasons, quite reach the top or fit in.

Power balance, or lack of, in Iago and Othello’s relationship is best demonstrated in the temptation scene, when Othello is so easily convinced of Desdemona’s infidelity. Iago asserts the power of his (apparent) friendship over Othello, resulting in Othello’s swift move to jealousy, and begins constructing a power structure of his own by guaranteeing Othello reliant on his opinion and ensuring that Othello cannot discuss the issue with his wife or his friend and lieutenant, Cassio. Further, in Act 4 Scene 1, where Othello’s rage leads to an epileptic fit. This can be visually and dramatically demonstrated by Iago’s physical dominance over Othello, as Othello writhes on the floor, and symbolises the role and power reversal that has taken place with Othello’s compliance, but without his knowledge.

Othello’s final speech is an important aspect of this reading. This eulogy should help him regain nobility in the state’s eyes, as he, unlike Iago, accepts his guilt and shows remorse, and the audience’s sympathies lie with Othello. Perhaps he could give his eulogy speech in an upright stance, to symbolise this. When the violence settles and the Senate members, including the Duke, regain control at the end of Act 5 Scene 2, Lodovico’s closing speech should echo this, shifting the blame entirely onto Iago, reinforced by the lines “Look on the tragic loading of this bed:/ This is thy work”. The audience should be left in no doubt, this is not merely Iago’s work, but also the state’s, by way of negligence. 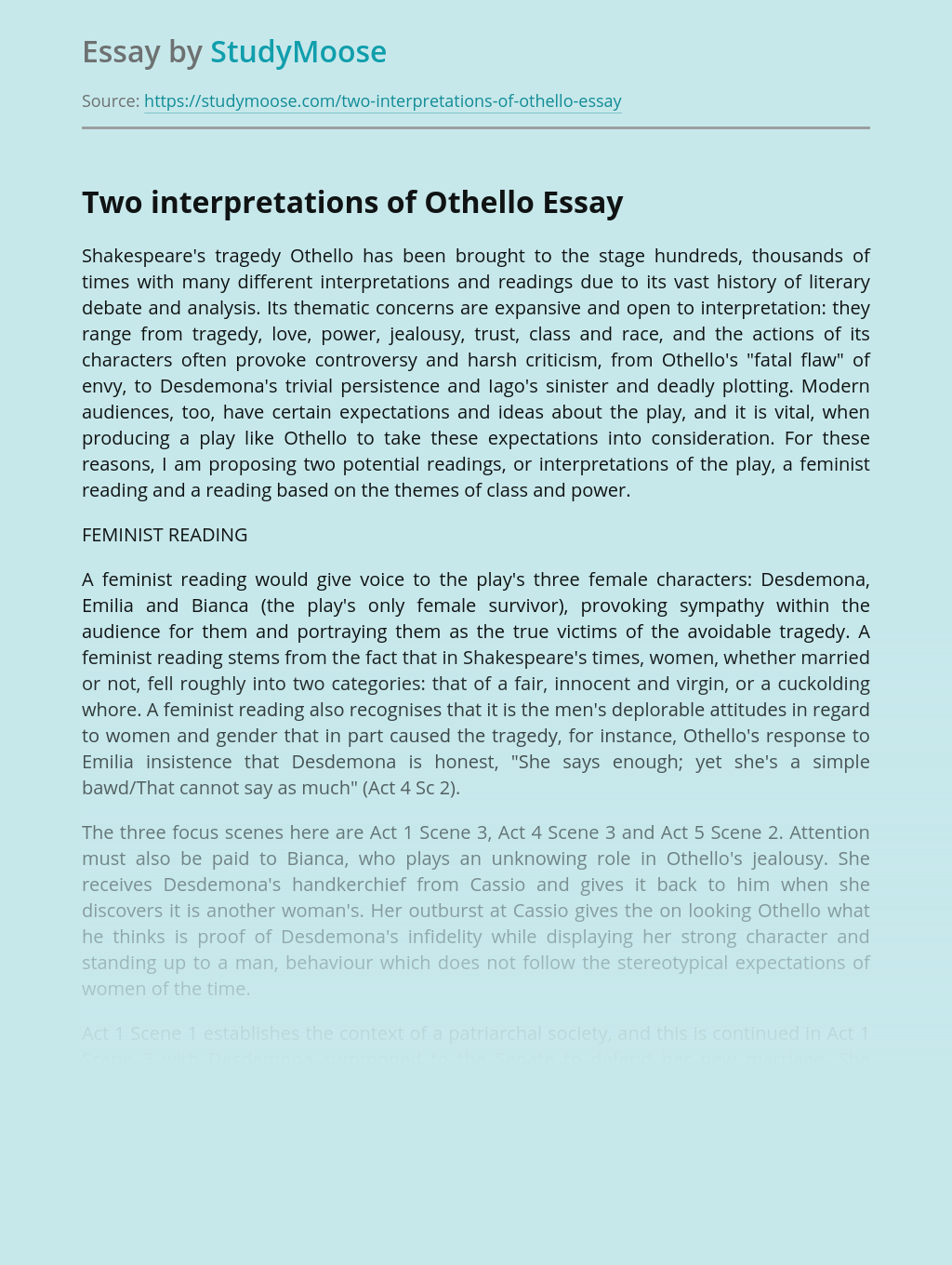 Rate this post William Shakespeare was an English playwright and poet and widely recognized as the greatest dramatist to ever live. His plays show a great knowledge of human behavior, shown through portrayals of a wide range of characters. He had a large vocabulary, using almost 30,000 different words in his plays. His use of...

"My Last Duchess" by By Robert Browning

Rate this post My Last Duchess is no exception as it immediately gives the reader a sense that the narrator, The Duke, see’s his late wife as a possession. He refers to her with the possessive pronoun ‘My’ to try, it appears; to regain a certain degree of control over her. This wanting of control...

Get Essay
Othello Essay - Character's and Their Obesessions

Rate this post Many characters in Shakespeare’s Othello become obsessed with the current state of a relationship. These obsessions then eventually lead the characters to failure when the obsessions become a goal, instead of something that occupies their mind. The transitions from an obsession to a goal can be seen through the actions of Othello,...

Rate this post Imagery, as defined by Webster’s Dictionary, is the use of vivid figurative language to represent objects, actions, or ideas. In Othello, Shakespeare makes use of colors to represent ideas or to set the mood for the scenes taking place. The use of such color imagery enhances the play, causing the reader to...

Rate this post At the end of the novel there can be seen to be a change of attitude of society towards Grenouille. Due to his amazing gift, Grenouille is able to create a scent that powerfully manipulates human emotion through preserving the aroma of the 25 virgin girls. At Grenouille’s execution he reveals this...