What makes a leader effective in his business? How does he help his employees to be strengthened and supported in their roles? The purpose of this writing is to examine the leadership skills of two fast-food tycoons, Dave Thomas and S. Cathy Truett. We will see what techniques helped these two men have an effective influence on their employees and how biblical ideas and leadership strategies arise from both to become guiding principles for follower success.

After complaining he could not find a good hamburger, Dave Thomas opened his first restaurant in Columbus, Ohio, naming it after his daughter, Wendy.

Don't use plagiarized sources. Get your custom essay on
“ Two Effective Leaders In the Fast Food Industry ”
Get custom paper
NEW! smart matching with writer

He met with such success that after a decade he had more than 1,000 stores. Wendy’s is the third ranking fast food restaurant in the United States (Cardwell, 2013).

Sense of significance – If a leader cares deeply and believes in those they are leading, it brings out the best in them.

Dave Thomas gave others a sense of significance.

“The company’s employees·talk about being part of the Wendy’s family and say that’s because Thomas had an ability to make people feel that they mattered. You’d remember how it feels being included” (Koteff & Hayes, 2004). Creating significance in employees leads to trust and willingness to follow.

Shared learning – Jack Schuessler, Wendy’s corporate CEO for thirty years, spoke of Thomas’ leadership this way, “‘Dave had such a knack for making you feel like you were the only person in the world.

It was through some of those chats that Schuessler learned much about the business of running restaurants” (Koteff & Hayes, 2004). Apostle Peter spoke of how Jesus taught the disciples by “what he did, where he took us, what he asked us, and what he said” (Ford, 1991, p. 178). If leaders want others to follow, they must give them the tools to succeed.

Teamwork – “The best teams in the world are the ones that help people become better and achieve more than they ever thought they could on their own.” (Thomas, What Makes for Success?, 1996). These words from Dave Thomas during a speech sum up Thomas’s philosophy of what teamwork means. “Leaders develop in others the competence, as well as the confidence, to act and to succeed” (Kouzes & Posner, 2018, p. 222). It takes an effective leader to build teams that succeed.

Take risks – A leader must be willing to let others take a risk. When Jesus was asked by Apostle Peter if he could walk on the water with him, Jesus told him to come. When Peter began to sink, Jesus asked why he doubted. The Lord wanted Peter to learn from the risk he took (Ford, 1991, p. 216). Dave Thomas had a similar concept. “You can’t get ahead if you don’t try new things. Sure, you might fail – we all do now and then – but you could succeed in a big way (Thomas, My Rules for Success, 1997).

S. Truett Cathy began by creating and perfecting a chicken sandwich and serving it as a licensed item on restaurant menus. By 1964, it was served in over 50 establishments. The great approval of his sandwich resulted in Cathy opening his first Chick-fil-A store in 1967.

Success has been so great that over 2,000 restaurants in over 43 states have been opened since then (Cardwell, 2013). His company is based on scripture. “I see no conflict between biblical principles and good business practices, simply because the Golden Rule is all we have to teach,” Cathy says. “When you go out to eat, you like to be greeted by a bunch of smiling faces, and a demonstrated serving spirit (Lightsey, 2013).

Relationships – (S.) Truett Cathy taught Sunday school for over 40 years and often hired his students as workers. One student said, “He saw something in me and was able to trust me, and it was a great relationship,” says Wayne Farr, who today has two Chick-fil-A restaurants; his son is a Chick-fil-A owner and his daughter a Chick-fil-A employee” (Lightsey, 2013). Kouzes and Posner give advice saying, “As a leader·you need to find a way to get close to people” (Kouzes & Posner, 2018, p.243).

Sharing Power – Before Jesus left this earth, he gave the promised Holy Spirit to his disciples. Jesus gave them this power for the job they had to do. (John 20:22). For employees to succeed they must have the necessary tools and training to do their jobs (Kouzes & Posner, 2018, p. 213).

Chick-fil-A’s “philosophy is that when it comes to responding to customers, employees feel empowered. There are all kinds of scenarios that pop up that you don’t necessarily train for. We try to teach the principles of what it is to care for somebody so that a team member can kind of act on their own when they see an opportunity” (Pignataro, 2018).

Sense of Significance – “The root of Cathy’s operating success, friends and followers claim, resides in his care and respect — his love — for others. Truett Cathy knows how to run a business, but more basically he knows how to treat people” (Hayes, 1996).

Employees must know you care about them. Jesus spoke about this in John 13:35 (English Standard Version), “By this all people will know that you are my disciples, if you have love for one another.” Mr. Cathy created a sense of significance with his employees that inspired follow ship.

Shared Learning (Mentoring) – Cathy knew the benefits of shared learning within his organization when he said,

The restaurant business gives us a wonderful opportunity to mentor young people and help guide them toward adulthood. Hundreds of thousands of teenagers have worked at a Chick-fil-A restaurant and I like to think we have been a positive influence for each of them … Many of our young employees have been encouraged to work for Chick-fil-A because of the positive influence of our Operators. (Hattwick, 2005)

The disciples learned about Jesus’ mission by being right there beside him day in, and day out. “Jesus’ commitment to spend time with his people made for an environment in which learning happened. So learning was not only something that casually happened; it was something that was intentionally focused” (Ford, 1991, p. 212).

By looking at some techniques used by these two men it is easy to see how they were influential with employees. Dave Thomas and S. Truett Cathy were guided by biblical ideas in their leadership styles. It created success with employees and success with their businesses. Following their principles may not produce multi-million-dollar companies, but it most certainly will make for good business practices for its employees. 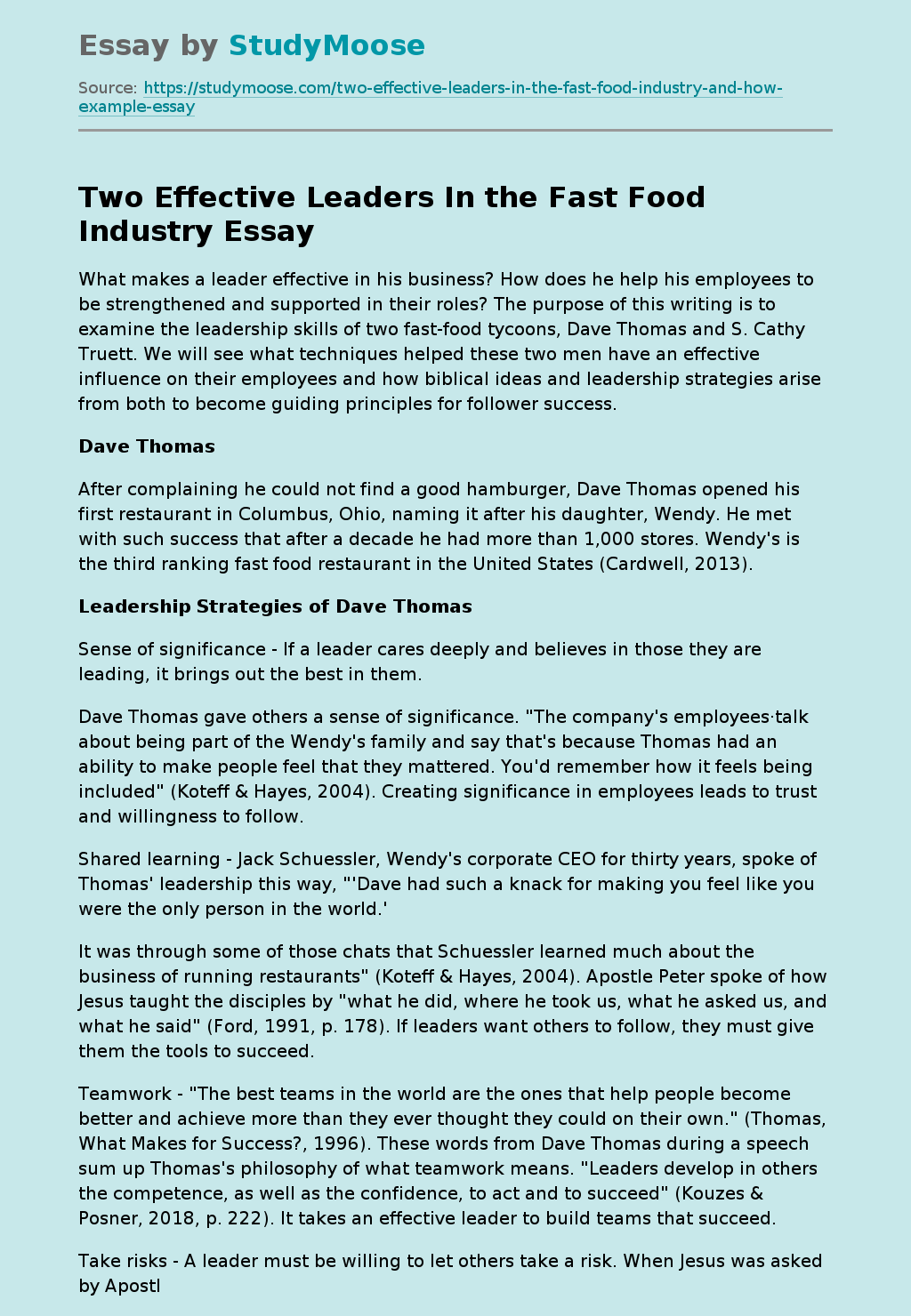