The Neolithic Revolution made a major impact on the course of events on human history.

Don't use plagiarized sources.
Get Your Custom Essay on Turning Points For The Neolithic Revolution Just from $13,9/Page

There were many advancements made as tools, agriculture and the domestication of animals. Families could settle and produced their own food and crops. The eight elements of culture or the way people lived contributed in people’s lives a lot and still to this day. Politics which is government and laws, protection and the start of leaders in a city, soon developed by the rise of civilizations. Economy is the way a culture gets the things it needs such as farming and trade.

Religion is beliefs and rituals of a culture, which follows art, the expressions of a cultures idea. Geography is the land, location, and resources. Language plays a big part for communication, the starting of the writing system. The customs are traditions of a culture. Society the last element, the type of people in a culture. Civilizations gave a steady food supply, advanced technology, form of writing, architecture, religion, laws and specialized jobs.

Turning Points For The Neolithic Revolution. (2016, Jun 13). Retrieved from https://studymoose.com/turning-points-for-the-neolithic-revolution-essay 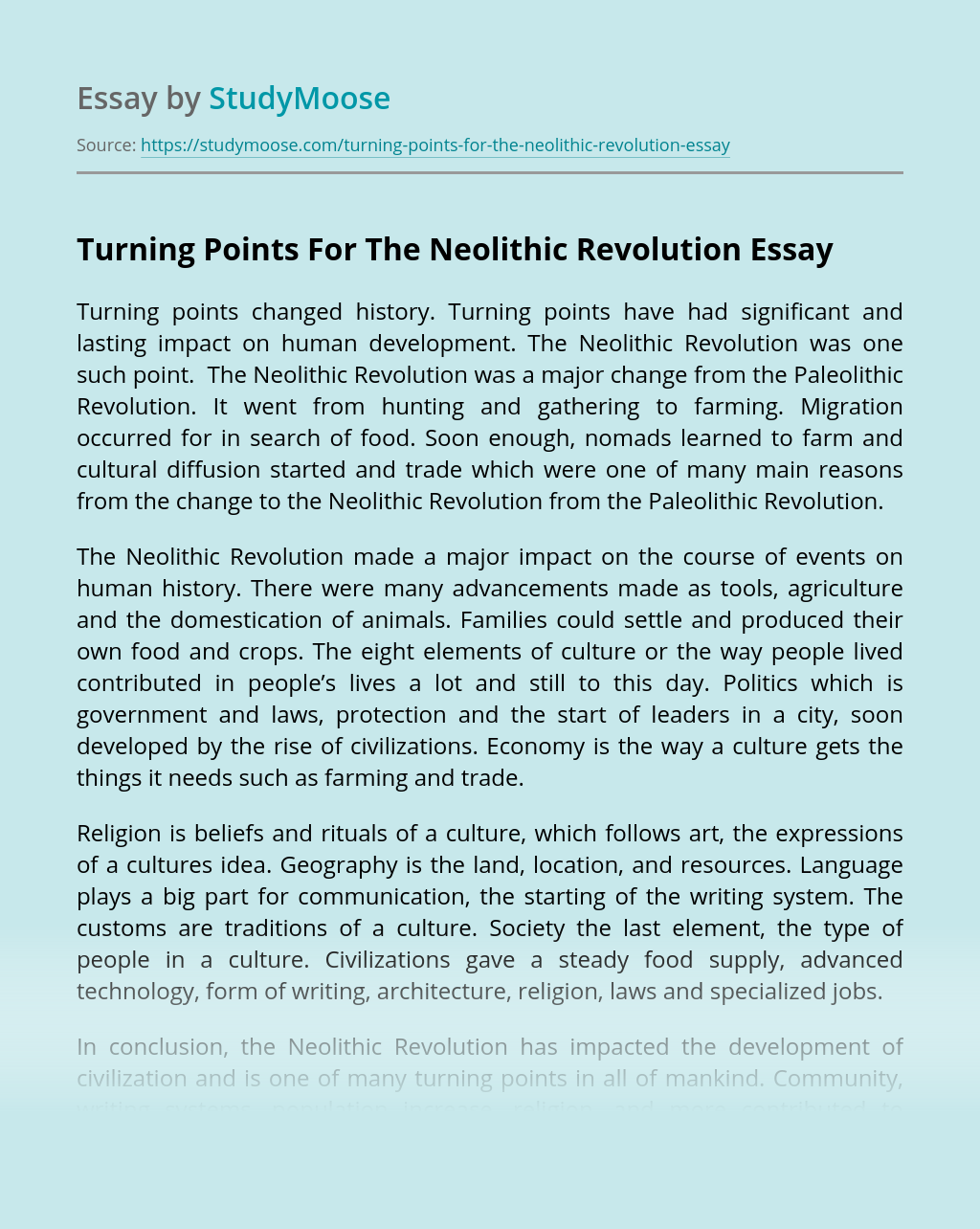 Many civilization’s achievements have had a lasting effect on both the world and the future world. Some very good examples of this are the early civilizations of Egypt Mesopotamia and the people of the Indus river valley. Through the building of pyramids by the Egyptians, the invention of the plow by the Mesopotamians and the...

Role of NCC in Nation Building

The word “culture” is rather difficult to define accurately and is as elusive as the term civilisation. Culture to the anthropologist refers to the sum total of the possessions of an identifiable group of people. The concept covers material as well as non-material things, the latter including language, rituals, beliefs, values, norms, practices, wisdom, knowledge,...

The Neolithic Revolution was a fundamental change in the way people lived. The shift from hunting & gathering to agriculture led to permanent settlements, the establishment of social classes, and the eventual rise of civilizations. It was a revolution of achieving social and technological advances, while economic, political, and social changes resulted from the rise...