"Tricks With Mirrors" by Margaret Atwood

In Part I of Tricks With Mirrors, Atwood uses a seemingly vague introduction to the subject matter, but gets straight to the point. Within five lines, she distinctly identifies her role as a mirror as she says, “I enter with you and become a mirror,” (4-5). She gives the impression that she is merely an object in this relationship. She is a mirror through which her self-absorbed lover may view himself. “Mirrors are the perfect lovers,” she states (6-7). They show a constant and loyal reflection to whoever may stand in front of them.

Don't use plagiarized sources. Get your custom essay on
“ “Tricks With Mirrors” by Margaret Atwood ”
Get custom paper
NEW! smart matching with writer

She is objectifying herself as she tells her lover to carry her carefully up the stairs and to throw her on the bed with her “reflecting side up” (line 12). She then moves on to describe the patterns of their intimacy in an almost detached manner – her lover does not kiss her; he only kisses his own reflection.

She is only a mirror, after all. The speaker tells us that her lover is blind, whether willingly or not is not identified to the truth of their relationship when she says that, during their intimate moments, “your own eyes you find you are up against closed,” (16-17).

She speaks with a bitter tone, clearly showing that she is displeased with her situation and the constant expectations she must meet. At the same time, though, she writes with an open-handed honesty. She is simply a mirror telling her story, it seems. The introduction that Part I provides us with, identifies the problem the speaker is facing, she is at once unhappy but has willingly placed herself in her role as a mirror.

In the second part of Atwood’s poem, the speaker describes the undeniable feelings that come from being a separate entity apart from her lover. Even as a mirror, there is more to her than there seems. As a woman hiding behind the metaphor of a mirror, the speaker seems to be telling her lover that the facets of her personality and physical appearance should not go unnoticed in the shadows of the way she serves to reflect. She tells her lover, “There is more than this dead blue oblong eye turned outwards to you,” (18-19).

In the same stanza, she describes the other parts of the mirror: the frame and its intricacies that do not reflect the viewer; the nails that hang the mirror; the marks in the wood from the nails, the scars from being hung on the wall. The speaker is almost crying out for attention to be loved not as a reflector, but as an individual with complexities of her own.

Part III of the poem goes into the explanation of what it is like to be a mirror. She discusses the fact that it is very difficult to play the reflecting role in the relationship she must not let her own personality show through in the reflection of her lover. She tells him, clearly, “Consider what restraint it takes: breath withheld, no anger or joy disturbing the surface of the ice,” (38-41). She plays the role of the giver and caretaker further when she tells him that he is suspended in her, and she preserves him; in her he may find safety and refuge. Her own existence must never interfere with her provisions for her lover. She defines her work as a mirror not as a trick, but as a craft.

She says, “mirrors are crafty,” (47). This is a profound statement, as it delves deeper in the historic role of women behind this mirror metaphor. Women have had to learn, over time, to be crafty – to have this craft of reflecting to the man what he wishes to see of himself. This statement also reveals the complexities of the woman behind the mirror. Because she has a nature of her own, she is automatically separable from the lover whom she reflects.

The fourth stanza of the poem appears to be the speaker’s admission of her own autonomous nature. It seems almost a placid attempt at rebellion, she states a few words about wanting to stop that life, which she describes as “mute and devoid of colour,” (50). She describes her life as remote, being that it lacks the sights and sounds of the world beyond her lover. She then attempts to open her lover’s eyes to the truth. She tells him that she is actually behind a door, and not a mirror. She is asking for his recognition of her true existence when she implores, “say the releasing word, whatever that may be, open the wall,” (58-59).

However, she tells the reader that he doesn’t hear her plea, or the truth; he sees only the reflection of himself. Her statement is directed verbally towards her lover, but falls upon deaf ears and is resonated to the reader – “Instead you stand in front of me combing your hair,” (60-61). In reality, the whole poem is a dispassionate attempt to engage someone, the lover or the reader, into realizing the truth of her existence. The words are never directly placed toward the reader, simply because she would prefer that her lover could hear her voice. The poem is almost self-directed, in a way, in that the players are internal, and the reader is merely an outsider looking in.

In the fifth and final part of the poem, the speaker seems to give up on the mirror metaphor, perhaps because her lover is not responding as she hoped, or is irritated and angered by her upheaval of their mutual interpretation of her existence. “You don’t like these metaphors,” she says to her lover (62). She is telling him that, since he cannot understand her through the words she has used, she will try again with other ones. She then rebukes her mirror claim and attempts to convey her message to him through another metaphor “Perhaps I am not a mirror. Perhaps I am a pool,” (64-65).

She is now identifying her as something that is deeper than a sheet of reflective glass; she is now a body of water that still reflects on the surface. The last line of the poem is a feeble command to her lover: “Think about pools,” (66). Perhaps this is a final attempt at making him see the reality of her nature as he is so self-involved, it may only be through his own momentary consideration that he will see things in their true light.

The speaker is an object trapped in a relationship in which she serves only to reflect her lover to himself and she no longer wishes to remain as such. She is seemingly ever patient in her endeavors, and continues to give throughout her quiet rebellion. All her lover ever does is take from her what he pleases a faithful reflection of what he wishes to see in himself. Atwood defines these traditional roles in relationships while forming her opposition to the nature of these unfair dynamics. A deeper message may be found in the poem, however, as she conveys her detached unhappiness do not become a mirror, she tells us.

"Tricks With Mirrors" by Margaret Atwood. (2016, Jun 20). Retrieved from https://studymoose.com/tricks-with-mirrors-by-margaret-atwood-essay 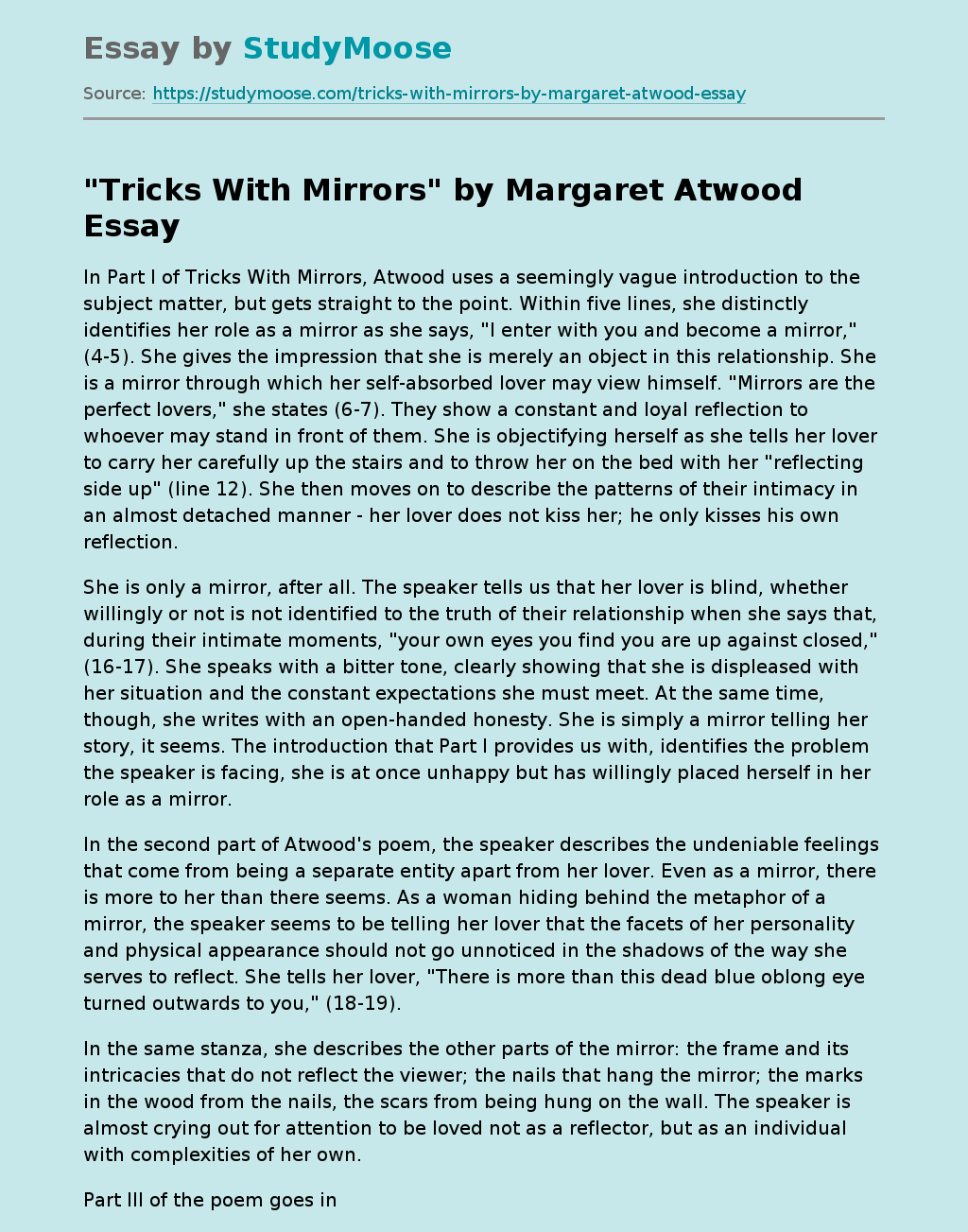