Don’t waste time
Get a verified writer to help you with Trends in First ionization energy of group 1 and period 4 elements
Hire verified writer
$35.80 for a 2-page paper

This decreases the attraction between the nucleus and the valence electrons. b) Since there are more filled inner shells now, these provide a stronger shielding effect for the valence electrons; effectively reducing the attraction between the valence electrons and the nucleus. c) Although the number of protons increases down a group, the nuclear charge is countered by the above mentioned 2 effects. Thus, the effective nuclear charge decreases. d) Since the ionization energy measures the energy which must be supplied to remove an electron, the more loosely held electrons are easier to remove as we move down the group; and hence, less energy must be supplied to remove them.

Thus, first ionization energy decreases as we move down Group 1. EXCEPTIONS TO THE TREND OF IONIZATION ENERGY IN GROUP 1:

a) The one electron present in the 7s orbital of Francium; as shown by the Schrodinger Wave equation has a finite probability of being at the Nucleus of the atom where its speed becomes near to that of the speed of light.

b) From Einstein’s equation, it gains mass and the overall orbital contracts. This causes atomic size to decrease and increases the attraction between the valence shell and the nucleus. Shielding effect also decreases considerably due to the loss of one whole fully filled inner shell (Energy level 6). c)

Thus, Francium has an atomic radius smaller than that of Caesium because of relativistic effects. d) This causes the valence electrons to be more tightly bound to the nucleus, causing the amount of energy required to remove them to increase. Hence, Francium has a higher ionization energy
value (393 kJ/ mol) when compared to Cs (376 kJ/ mol) .

TRENDS IN FIRST IONIZATION ENERGY OF PERIOD 4 ELEMENTS, AND THEIR ANALYSIS General Trend in First Ionization energies of Period 4 elements: As we move from left to right across Period 4, the ionization energy generally increases (From K to Kr ). There are a few exceptions such as Vanadium, Nickel, Gallium and Selenium. When moving from left to right across the same period, the atomic number increases by one, adding one proton to the nucleus and one electron to the outer most shell. But, no energy levels or shells are added.

For example, in period 4, each electron is added to the last, i.e., 4th or N energy level. The shielding effect remains the same since the number of completely filled inner shells remains the same. The concentration of more protons in the nucleus combined with the above 2 effects, causes effective nuclear charge to increase ; pulling the valence shell more tightly towards the nucleus and causing atomic size to shrink. Therefore, the electrons are more tightly held, it requires more energy to remove them. Since first ionization energy is a measure of the energy required to remove a valence electron, it increases as more energy is required.

Thus, lesser energy is required to remove the valence electrons from Vanadium than from titanium, causing it to have a lower ionization energy value. ( V – 650 kJ/ mol and Ti – 658 kJ/mol)

b) Gallium – Gallium has a much lower first ionization energy value than Zinc. Zinc has an atomic number of 30 , therefore its electronic
configuration is [Ar] 4s2 3d10 .

Since it is a transition metal and has completely filled s and d orbitals, it gains extra stability and it becomes tougher to remove a valence electron from Zinc. This is why the First ionization energy shoots up from Cu ( 746 kJ/ mol) to Zn (906 kJ/mol). But, Gallium has atomic number 31 and an electronic configuration of [ Ar ] 3d10 4s2 4p1 .

Since the valence electron is in a whole new subshell ( 4p ), which is further from the nucleus, it causes the attraction between the nucleus and the electron to decrease. Also, the completely filled inner shells provide a shielding effect, causing effective nuclear charge to drop. This makes it easier to remove the valence electron, therefore, less energy is required to remove it. Hence, Its first ionization energy is lesser than that of Gallium.

c) Selenium – Selenium has a first ionization energy lesser than that of Arsenic. Arsenic has electronic configuration [Ar]3d10 4s2 4p3 . Arsenic already has the stable configuration of half-filled sublevel so it wouldn’t give up it’s electron as readily, so more energy is required to remove it.

But selenium does not have a configuration as stable and is just one electron away from having it. So, it gives up its electron more readily and easily than Arsenic. Also, In the 4p sublevel of Arsenic, there is no pairing, minimizing electron – electron repulsion.

But, in the 4p sublevel of Selenium, there is pairing in the 4px orbital, increasing electron – electron repulsion, making it easier to remove an electron from Selenium than from Arsenic. Hence, selenium has a lower ionization energy than Arsenic.

Thus, more energy is required to remove electrons from Cobalt than from Nickel. Thus Nickel has a lower first ionization energy value than Cobalt.

Trends in First ionization energy of group 1 and period 4 elements. (2016, May 21). Retrieved from http://studymoose.com/trends-in-first-ionization-energy-of-group-1-and-period-4-elements-essay 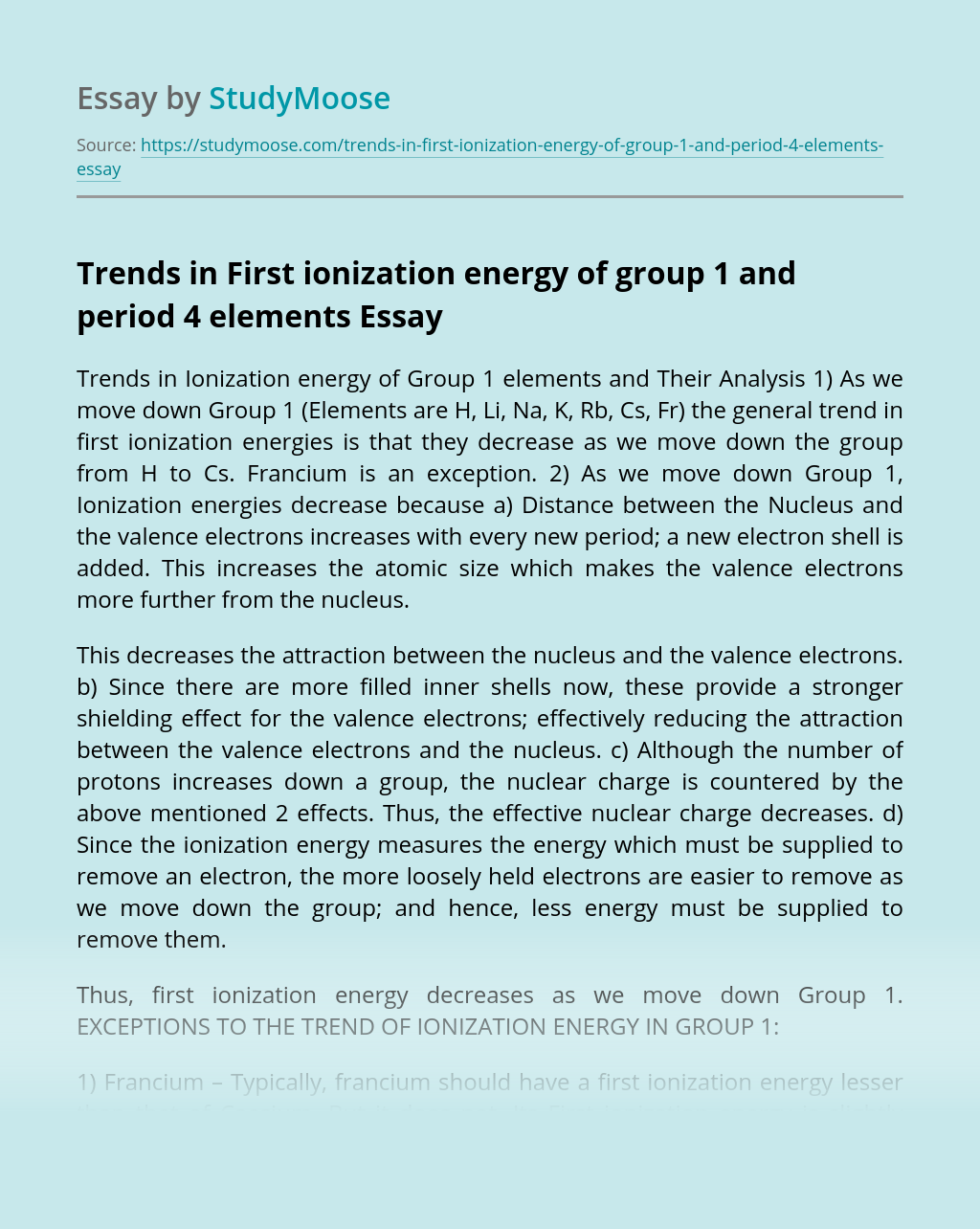 Don’t waste time
Get a verified writer to help you with Trends in First ionization energy of group 1 and period 4 elements
Hire verified writer
$35.80 for a 2-page paper
Stay Safe, Stay Original